" Built on the site of a 7th century monastery and founded around 1200, St Cadoc's in Llancarfan, Vale of Glamorgan is, from the outside, just another beautiful small Welsh village church.

But inside, conservators have uncovered some stunning 15th century wall paintings to the delight of locals, visitors and experts alike.

After the discovery of a thin red line of paint on the wall, a team of experts were brought in to investigate what else was lurking behind the 20 layers of limewash added over five centuries.

Now, after five years of restoration work, the church is revealing its treasures: startlingly bold images of the seven deadly sins, a royal family, a ghoulish death figure - and what has been described as one of the largest and most spectacular tableaux of St George and the Dragon ever seen in a British church.

The work was funded by local trusts, Wales's heritage body Cadw and the Heritage Lottery Fund.

Having been closed except for services during the long periods of conservation work, St Cadoc's is now ready for the public to see the pictures for themselves.

BBC News went to visit the church and meet the people bringing the paintings to life.

Stop/Start is a series of video features for the BBC News website which follows both new trends that are beginning and old traditions that are coming to an end."

There's still more paintings left for them to uncover.

That's just cool. You never know where history may be lurking. I'm looking forward to seeing more. Found the vid on YT.


I loved watching that video! It makes you wonder how much more stuff is out there, undiscovered, yet right under your nose, so to speak.

Not recommending anyone take a chisel to their local historical buildings, but keeping an extra vigilant eye out might just uncover stuff no-one knows is there.


Thank you for posting the video. I don't know how to do that yet..


I loved watching it to. Most of the time they just show photos, it was nice to see an actual video of the paintings. Lately, it seems that there are more discoveries of ancient times. Pretty exciting!

I have always been heavily influenced by Byzantine and ancient Christian art, and this is some top shelf work. The George and the Dragon is inspirational. Also that death figure is seriously unsettling.

All in all a good watch and amazing discovery.


It will be exciting to see what they reveal next. In the video she said that the townspeople were as excited as the church to see what is revealed next. When one see's history from past revealed you can't help but wonder about their civilization. What were they like? How many in their city? How did they live? etc.. That is what drew me to ATS was the threads that were posted of new finds in ancient history stories.

Thank you for your response.

Makes me wonder why did they cover paintings...

Why were these paintings whitewashed?


Change happened gradually but was nonetheless widespread, resulting in an eradication of imagery on church walls across the nation. A reflection of Tudor and Stuart religious politics, the era was called the Age of the Iconoclasts. However, the question of religion was unsettled and, in this turbulent religious setting, not everyone advocated the removal of the precious imagery.


I loved watching it to. Most of the time they just show photos, it was nice to see an actual video of the paintings. Lately, it seems that there are more discoveries of ancient times. Pretty exciting!


Hi. Just "quote" a page and check the coding. If it's a youtube it's just bracketing the required section of the url with single brackets on the terms yvid] and [/yvid] (I left the first bracket vacant because it would have caused a blank vid form to show up, like this:

The required part of the url is easy to find once you look at a few of the codings on posts with youtube videos, just check the "quote"' and you can see and get a handle on it.
edit on 9-12-2013 by Aleister because: (no reason given)

SuperFrog
Thank you for posting! S&F!

Makes me wonder why did they cover paintings...


Looks like post Welsh Revolution English propaganda. The Welsh figured they were the Dragon, Glyndwr was the dragon and at some point got sick of looking at it.
edit on 9-12-2013 by Logarock because: n


Thank you for posting the link. That was a very informative article. I understand why they covered them up. But not sure how they remove the plaster without damaging the paintings underneath. My husband and I were discussing that last night. It would be very slow going and tedious. But well worth all the work.

posted on Dec, 10 2013 @ 08:50 PM
link
Lets take a moment to view this material on different terms, the current king and queen is besides the point which may not be illustrated. These are paintings in a church, biblical scenes from the book of revelation are being re-enacted. A fact the utube video fails to identify...of particular importance I find one argument of the King marrying the "Corpse Bride". 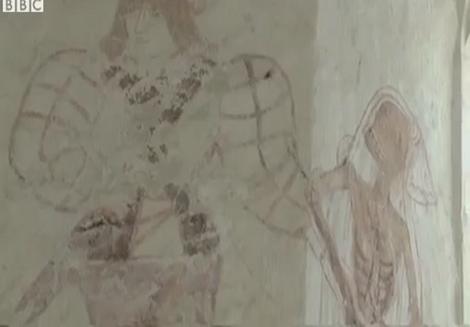 REVELATION 12:3 And there appeared another wonder in heaven; and behold a great red dragon, having seven heads and ten horns, and seven crowns upon his heads. REVELATION 12:4 And his tail drew the third part of the stars of heaven, and did cast them to the earth: and the dragon stood before the woman which was ready to be delivered, for to devour her child as soon as it was born.

We would go on to say that the death of the United Kingdom is predicted at the Wedding of the Antichrist with the Church. I'm sure there are other parodies, some are easy to follow, like the painting of the pale horse, or the seven plaques you can point out from the utube video.
edit on 10-12-2013 by sighstars because: minor edits