What is the dollar really worth?

posted on Dec, 6 2013 @ 07:43 PM
link
I ask the question "What is the dollar really worth" because I really don't know anymore. We used to use the Gold Standard, then the Silver Standard, then back to Gold until Nixon took the US off the Gold Standard on August 15,1971. So, what is our economy based on? Consumer goods? Its Manufacturing base? The way it seems China has all of the economic power as it has more gold and a larger total population than the US. In addiition, China holds most of the US debt.

How does the US keep its financial strength? Is it because the US is too big to fail? A US financial collapse would mean a worldwide financial collapse? Where is the limit for us (US) and when do we reach it? I'll ask once again, what is the Dollar really worth?


Its barely worth the paper its printed on...

The whole economy is a grand illusion...


So, we're living a lie....but why? I think the answer would be one hell of a conspiracy to uncover.

posted on Dec, 6 2013 @ 07:53 PM
link
In 1920 you could use a $20 federal reserve note to buy a complete suit including shoes, belt undergarments the whole nine yards, today your lucky to buy a belt. In the 60's you could buy a Remington 22 magnum lever action rifle for around $68 now the same gun is way over $200. The currency value is based on supply (mostly) and there is a huge supply that lowers the value causing prices to go higher.


Basically it's getting down to almost nothing. 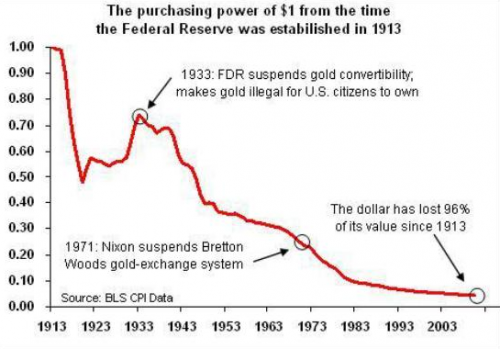 I use the bread to dollar ratio, how many good loaves of bread can you buy for a dollar vs 10 years ago. Or use the gallon of gas ratio if you prefer.

posted on Dec, 6 2013 @ 08:17 PM
link
In all honesty....maybe I'm part of the problem. I work a blue collar job for 40 hrs a week. With that money I pay bills. If I'm lucky, I save 20-50 dollars every two weeks. But you have to have money. You can't survive without it. If not for the dollar, I would be homeless as well as my wife and 2 kids. So a dollar to me equals a nice home, electricity, food, gas, cable t.v. and other things my family need. Sorry for selling out.....but my family comes first.


You're not selling out, you're speaking the truth of a lot of Americans these days. The value of the Dollar really makes me unsure for the future and the future for my family. We are helpless to China's hold on our purse-strings. The only reason they haven't cut those strings yet is because they still need the US to be strong to keep their economy strong. We're in trouble once they no longer need us. China is already the largest producer of Gold in the world.

And China owns most of the Rare-Earth Mines in the world at 95% ownership.

"In anticipation of China turning off its rare-earth spigot, Molycorp is gearing up to go back into full production. When mining restarts in 2012, the site is expected to turn out 20 000 metric tons of rare earth metals each year, says CEO Mark Smith. But the research site HardAssetsInvestor.com estimates that by then, annual world demand outside China is likely to exceed 60 000 metric tons."


Basically it's getting down to almost nothing.

I use the bread to dollar ratio, how many good loaves of bread can you buy for a dollar vs 10 years ago. Or use the gallon of gas ratio if you prefer.


Maybe the answer is in forming a North American Union with Canada, the Us, and Mexico. The Peso can be used as the currency. That'll be some real immigration reform.

For foreign nations, the dollar represents the capacity to purchase oil and gas. Since through OPEC, the US dollar is the only means by which oil can be purchased from OPEC, it behooves foreign countries to buy US dollars and debt in order to secure their short term energy needs by purchasing oil and gas from OPEC. I say short term because through the structure of the US dollar, tomorrows dollar will always be worth less than today's dollar. This is known as the petrodollar and represents to sole reason for the Iraq war in 1991 and 2003 as well as the Libyan civil war in 2011 and the hate for Venezuela. Iraq invaded Kuwait in 1991, upsetting the balance of OPEC and could have threatened a breakup of OPEC. In 2001, Saddam wanted to sell oil in Euros. The UN said "yeah that's fine, we see no reason why you can't". Saddam in 2002 was looking for buyers, 2003 he gets invaded on trumped up charges. In Libya, Qaddafi wanted to only sell his oil for Gold. The gold dinar was supposed to be Libya's new currency. Since it threatened the security of the petrodollar he was removed. The US hates Venezuela because they nationalized their oil assets in the form of a nationally owned company called "PDVSA". Basically any money from oil they sell goes straight to the country/people rather than some multinational corporation like Exxon-Mobil or Royal Dutch Shell.

So from a currency perspective (money is different than currency) it is quite literally someone else's debt plus interest. Since the current supply of dollars can never pay back all the debt because the interest is attached, the issuance of more dollars over time is inevitable. It's a slow lumbering currency designed specifically to eventually ruin an economy over time. Oh yeah, the interest can best be described as a US citizen's ability to work in the future. Your future taxes are literally the collateral used for US Dollar currency issuance.

From an international perspective, ownership of dollars represents capacity to purchase energy. As such, that's the closest to real money the dollar will ever get right now.
edit on 6-12-2013 by Galvatron because: (no reason given)


So, you're saying that OPEC is what's keeping the Dollar from falling.....? What happens once they turn their back on the US? I think the only way out of this is to form a N American union.

posted on Dec, 6 2013 @ 11:37 PM
link
I addressed what the U.S. dollar is now worth here on this thread, "Historic value of U.S. copper and silver coins and present day metal values"

Have a look see.


Partly. OPEC's deal to only sell oil in exchange for US dollars certainly helps the purchasing of the bonds that generate dollars through fractional banking with the federal reserve. However, that's only part of the "prop-up". The other part of the prop up relies on the ability of the US to make good on the debt issued. That is to say, to pay its own interest through the federal income tax (through goods and services by its populace).

I think there may be a point where the US is so unable to pay any of the interest on its bonds and currency due to a destitute or unemployed populace, that other countries will demand to be able to buy oil with different currencies en masse. This I think could shatter not only the US as an economy, but as a single nation too because it would destroy the system that acts as a positive feedback loop.


So, you're saying that OPEC is what's keeping the Dollar from falling.....? What happens once they turn their back on the US? I think the only way out of this is to form a N American union.


I fail to see how a NAU would help.
They're still 3 sovereign countries, all 3 with very different laws, politics, etc.


Yeah. A North American Union would only stall the big crunch when it happens because it would only simply extend the time by which the people's output and taxes could be used the collateralize the new issuance of currency created by the purchasing of US debt in order to pay for energy. Basically increasing the number of people you can use to collateralize the debt.

The only way, in my opinion, to actually solve this problem is to have a treasury issued (not bank issued) curency that behaves as both currency and money in that it has no interest attached and has a destinct and determined tangible value. I think an annual GDP backed currency/money supply would be ideal. The printing of money is gauged at the end of each fiscal year depending on population, GDP, and a host of other variables and is at the direct discretion of the treasury so there is oversight. That way the goods and services created by a country directly affects the strength of its currency. Each unit of currency can then equate to a proportionate unit of work, goods, services, whatever. It's a positive feedback loop that operates in the opposite direction of a debt/interest backed currency.
edit on 7-12-2013 by Galvatron because: (no reason given)

and right now the only thing keeping the dollar from sinking is the petrol dollar and the world reserve currency status.


Thanks for putting it so succinctly. That was what I was trying to say, but I ended up rambling.