The World's Largest Vessel Enters The Water In South Korea 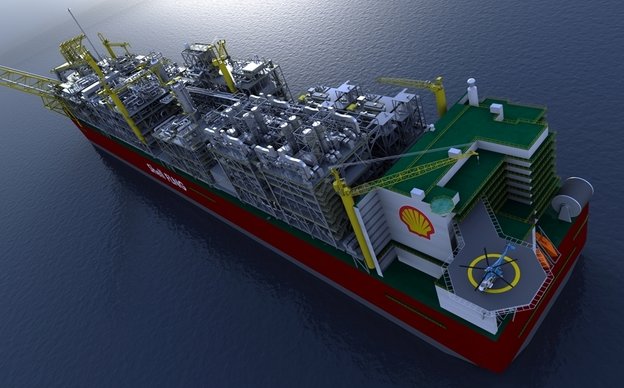 Shell has just floated the hull of the world's largest vessel out of its dry dock in South Korea. It's so massive that if you stood it up, it would be 1,601 feet tall, reaching higher into the sky than the Empire State Building. The vessel, called the Prelude, will actually be used more as a floating island than a ship. It won't be able to travel under its own power. Shell plans to tow it and anchor it about 300 miles off the coast of western Australia for 25 years. There, the 600,000-ton Prelude will serve as a , or LNG, facility, which lets the company tap into the natural gas deep at sea. The gas will then be chilled into a liquid, which makes the gas easier to store and ship.

"Smaller ships will come and pick up the natural gas and transport it to customers. Shell's Prelude is so huge it can store enough liquefied natural gas (LNG) to fill 175 Olympic swimming pools. It will stay in place during stormy weather and is built to withstand a Category 5 cyclone, according to the company."

How many more of these monsters are going to 'pollute' the waters????

Yeah, the oil industry, what next?

Added: Here's a bit on the dangers of LNG, make of it what you will

BOTTOM LINE: Investing billions of dollars in new shale gas infrastructure f or domestic use is, at best, of limited value for a short period o f time if we put in place both a C O2 price and regulations to minimize methane leakage . Exporting gas vitiates ev en that limited value and so investing billions in LNG infra structure is, at best, a waste of resources better utilized for deploying truly low ­carbon energy. At worst, i t helps accelerates the world pa st the 2°C warming threshold into Terra incognita — a planet of amplifying feedbacks and multiple simultaneous catastrophic impacts .

Who wants to start a fun wager than this thing causes some catastrophic spill and kills half the Great Barrier Reef by 5 years?


It's going to be a LNG facility storing natural gas and I'm not in the oil industry so I don't know what the potential destruction would be in the event of an accident, but surely it wouldn't be good.


This thing is HUGE!!

posted on Dec, 5 2013 @ 09:14 PM
link
So the "recent oil discoveries" which no one knew about just happens to be the best place to park this thing?

Truly the biggest coincidence in history,,,right?

All told the recent discovery outside a sleepy Australian town contains more black gold than in all of Iran, Iraq, Canaa, or Venezuela. The current estimates of 233 billion barrels are just 30 billion barrels shy of the estimated reserves in all of Saudi Arabia.

This project was started long ago with knowledge that we were never going to be exposed to until all the deals were signed, sealed and delivered.


Sorry AmateuRN the Barrier reef is off the east coast of Aussie a couple of thousand klicks away but your point is taken.

We should all be glad that this monster is to help us in general but sadly only a few. This monster Vessel is also going to be test with our future monster storms. I'll put my money on Nature called Super Cells or Super Storm.

jude11
So the "recent oil discoveries" which no one knew about just happens to be the best place to park this thing?

Truly the biggest coincidence in history,,,right?

All told the recent discovery outside a sleepy Australian town contains more black gold than in all of Iran, Iraq, Canaa, or Venezuela. The current estimates of 233 billion barrels are just 30 billion barrels shy of the estimated reserves in all of Saudi Arabia.

This project was started long ago with knowledge that we were never going to be exposed to until all the deals were signed, sealed and delivered.


first, i have known about these oil reserves they just "found' for like 20 years. they are in south australia not western australia
second, that oil is inland. that boat is no good
third... shell blows goats!
fourth the boat is going for LPG "natural gas" not oil, or shale oil.


Great Barrier Reef is on the East Coast, not West : )

It would be devastating if there were an accident along the West though, the beaches there are stunning and pristine.
edit on 5-12-2013 by samuel1990 because: (no reason given)


I wouldn't want to be on it in a Category 5 cyclone.....remember the invincible Titanic.

posted on Dec, 5 2013 @ 09:43 PM
link
A small tidal wave will flit that thing quickly. Well, I guess it may sit out there for eternity after it flips and breaks apart. Who in their right mind would make a ship like that. ??????


I think the wave would have to be really big unless it was in shallow water. I wonder what its draft is?

Here's another link as to the dangers:

posted on Dec, 5 2013 @ 09:59 PM
link
So which D1ckllionaire is going to be the first to make one of these behemoths into their personal dock for their yachts.

posted on Dec, 5 2013 @ 10:52 PM
link
I'm a little confused. If we can't have Oil, because of the pollution... We can't have nuclear because of what Fukushima has shown can happen... Wind is being sued regularly as birds seem to like flying into them and solar is sued when new ones are being tried for all kinds of reasons? Well, Natural Gas was one of the half way decent alternatives which isn't near as good as what people are working to make viable, but isn't near as bad as the black crude either.

If we can't have any of it, and arguments around here sit against each in variety, then what are we to do? Go back to kerosene lamps? Err.. Wait.. That would be a bad thing to develop on the scale it would be needed, too. Amish living isn't for me.

So, it seems a good thing to me that the only serious threat a huge LNG facility poses is sudden explosion. Don't park this beast in a harbor while it's loaded with product....and I'd say it's very nature limits potential risk.


Imagine if that ship was kitted out as a medical hospital which could be sent to disaster areas to treat the maimed, injured and dying ? no money in that. This ship is going to be parked off our north west Coast so Shell can have the Oil royalty free, the initial talk from shell was an onshore processing facility with local workers employed there. Now its just rape and pillage in international waters.

The day we move over to hydrogen and all these Oil companies are financially ruined is the day I hope to live for and see before I die.


I think if you take a look at a couple of my links in this thread, you'll understand the potential impact this beast could have but that wasn't why this thread was created. I wanted to simple bring to attention yet another monstrosity of the oil community.