Icelandic designer Sruli Recht's one of a kind human flesh ring, the Forget Me Knot band

posted on Dec, 5 2013 @ 06:01 PM
link
If you've been wondering just how one might accessorize those always fashionable Necropants, looks like Sruli Recht has an answer. 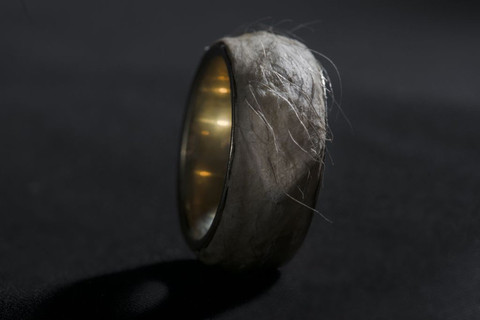 According to the designer's page, the Forget Me Knot band is made of "anthropodermic leather and 24 carat gold." It contains a110mm x 10mm strip of salted and tanned skin from the abdomen of the designer himself. There's a video of the surgery being performed by a plastic surgeon linked from the ring's page here.

It seems the ring isn't his first macabre design, from Wikipedia:


Recht's work is considered to be innovative in its use of indigenous, new and unconventional materials and technologies[3] though also seen by many to be controversial due to the use of materials such as Minke Whale foreskin, spider silk, seal and human skin.[4] Although he is known mostly as a Fashion Designer, some garments and show pieces from his seasonal collections are seen to blur the relationships between art, design and fashion.[5][6]
Examples of this are:
Carradina: An auto-erotic asphyxiation belt made from the skin of an Atlantic white-sided dolphin, provided with a hook to place on a door or handle.
Stone Blind: A pair of frames with white hand-cut Carrara marble lenses, intended for the visually impaired.
A Lasting Impression: Gloves made from the skin of a Basking Shark with the barbs on the inside of the glove. Due to the direction of the barbs, once the glove is put on the wearer can not remove them again unless they cut the gloves off.[7]
The Damned: A pocket square, or handkerchief, made from bullet-proof kevlar, intended to be worn in the breast pocket of a suit to protect the heart.[8]
And his arguably his most controversial piece:
Forget Me Knot: In 2012 Recht documented a one-off surgery/performance during which a plastic surgeon removed a 110mm x 10mm strip of skin from his abdomen while he was awake. The piece of skin with the hair still attached was tanned and mounted to a 24kt gold ring[9][10]


Sruli Recht is the owner of a shop called Vopnabúrið (Icelandic for "The Armory") in Reykjavik where he sells several unique items, including some weapons, along with his current line of clothing which he's named "Field Dressing." It appears this ring has been for sale since November of 2012. I can't imagine why nobody has snatched this thing for the low low price of €350,000 (about $478,555 USD)--maybe he should shave it so it doesn't look quite so Texas Chainsaw Massacre.
edit on 5-12-2013 by theantediluvian because: (no reason given)


What a new age... people 'wearing' their own skin.

Thats the guys tummy? Jesus someone give that man a razor blade. oO


*shudder* Just thought of this guy urging someone to "put their finger in his ring". So disturbing... Jesus.
edit on 5-12-2013 by Qumulys because: (no reason given)


Bloody heck, I cant stop thinking of this blasted thing. When I used to wear a ring, in moments of deep thought it would be on my lips..

What the heck does this thing do when it's worn in the shower? It would feel like a tight ball sack.. Jesus, I cant get this ring image out of my mind, I guess the artist won then just like "Piss Christ".
edit on 5-12-2013 by Qumulys because: (no reason given)