The temperature inside the "warp bubble" will destroy anything inside it and as it decelerates the energy released will destroy the destination point. Not to mention that fact that the energy requirement for this to actually work is something like ten billion times the amount of energy in the entire observable universe. This theory is so far fetched as to be totally impossible.
Also Bob Lazar is completely full of fertilizer, element 115 can only exist for about 200 miliseconds and has shown none of the exotic properties this charlatan has described.


Now thats a blast of nostalgia from my childhood :-)

I still want somebody to build an Eagle.

andy06shake
Good luck NASA considering we still don't know the properties of the exotic matter required to a allow the Alcubierre drive to function never mind actually managing to produce the stuff. Maybe in the next 50-100 years.


If then. Every time I hear about somebody wanting to warp spacetime, I just think to myself, "Well, sure, it's all easy if you're able to harness the power of a supermassive black hole. Piece of cake!"

Yes. Bring Alpha Centari to us by warping spacetime. I don't suppose any of the matter in-between will notice the pinch, and spacetime will somehow spring back into its original position once you turn off the power.


Well i would not trust anything out of nasa, my money at work lol. Heard yesterday that at least four have been fired over ison numbers being incorrect and misrepresentation. Will take little research to verify. Nasa has become just another politician. It has become evident to me that nasa needs to be shutdown and this money funneled into small private firms who are flying rockets and doing science and being truthful and honest with information.

The Russian recent strike was a good example. They knew it was inbound, it was within the cone of their sensors. All of the bells, whistles, alarms, would have been going off. Did we hear anything from them, no, they were pointing our attention elsewhere.

I have become disturbed that scientists paid for by us would not be forthcoming with information we need. It is like a doctor who takes oath to do no harm and then hurting patients. These scientists work for us, well they are supposed to.

Who are they protecting by not telling us when we are in danger. Why would they shut down the space fence, a very low cost simple device that would, does let us find and see these objects coming in, why, they don't want us to know.

Think on this, the elite, gov't officials, they have underground cities to go to. We don't. If you knew it was coming you and everyone else would flood these areas to get in. They don't want that. Lol they want to be able to get to their shelters safely and get locked in lol.

Take with grain of salt but there is some interesting reads here.

Fun read anyway, not sure what is true anymore. Lol

posted on Dec, 5 2013 @ 01:55 PM
link
I think this "warping space-time spaceships" is too science fiction right now. YES, some recent research suggested the requirements could be dramatically lower than thought before, but the requirements are still so far fetched it must remain in the realm of science fiction. There're so many holes in it right now too which suggest it CAN'T work, even if we met the absurd requirements. The devil is in the details!

We're much better researching ion propulsion or solar sails, since it's a proven technology. Plasma rockets fueld by nuclear reactions are a more distant potential, but I'd say these have the best chance of both dramatically increasing our reach as a space faring species and being a practical technology.
edit on 5-12-2013 by jonnywhite because: (no reason given)

Utnapisjtim
While looking for material to support time travel in my thread "Einstein and time travel" at www.abovetopsecret.com... I found this article about NASA hiring physicist Harold White to work on the possibilities of really fast space travel using a "warp drive" first proposed by Miguel Alcubierre in his 1994 paper "The Warp Drive: Hyper-Fast Travel Within General Relativity".

In terms of the engine's mechanics, a spheroid object would be placed between two regions of space-time (one expanding and one contracting). A "warp bubble" would then be generated that moves space-time around the object, effectively repositioning it — the end result being faster-than-light travel without the spheroid (or spacecraft) having to move with respect to its local frame of reference.

This is nothing new.

Google "NASA Breakthrough Propulsion Physics". They've been at this stuff since the 1990s. There was even a website for the old program called "Warp Drive When?"

Here was where things stood in 1999
archive.org...

Here is where things stood earlier this year: 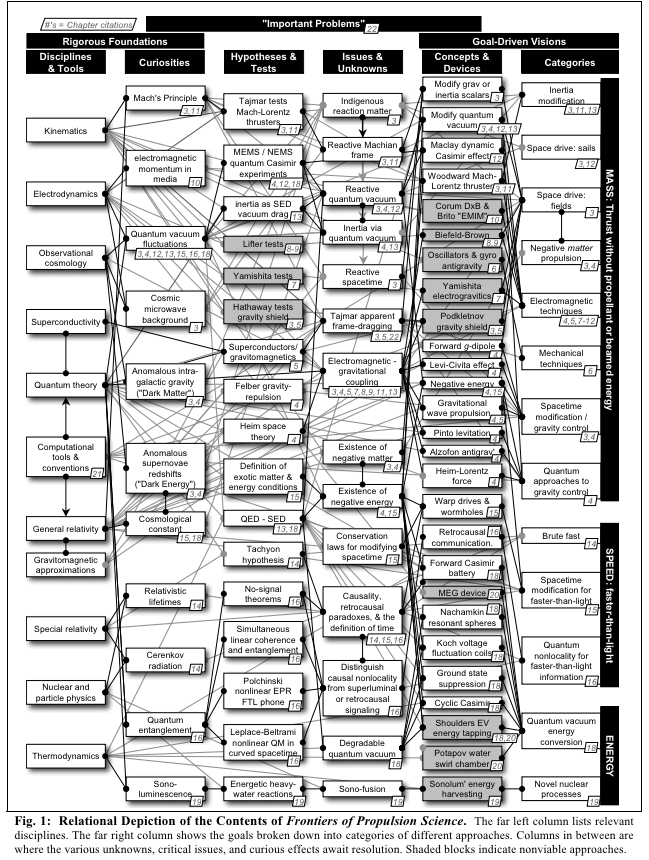 We're much better researching ion propulsion or solar sails, since it's a proven technology.

They don't need to be researched since they are proven. We have working ion engines in space right now and have lofted solar sails as well.

Neither of which will get us to the stars in any reasonable time.

It's called researching the right tool for the right job. And it is not a zero sum game either. One can look into propulsion breakthroughs while refining proven technology like ion engines and solar sails.

Why would you say they are more distant when we had NERVA back in the 1960s?

Neither ion engines, solar sails (using just the sun's light) or nuclear plasma rockets will get a ship to the stars within a human lifetime.

By your logic we'd be better off researching ways to live 500 years than looking at any of this space stuff for now...

and being a practical technology

JadeStar
Fine. Let China do all the basic research right? Technology is the application of basic research with refinement based upon need.
edit on 5-12-2013 by JadeStar because: (no reason given)

I say do the research ourselves...then get China to build it for cheap.


JadeStar
Fine. Let China do all the basic research right? Technology is the application of basic research with refinement based upon need.
edit on 5-12-2013 by JadeStar because: (no reason given)

I say do the research ourselves...then get China to build it for cheap.

dlbott
Take with grain of salt but there is some interesting reads here.

Fun read anyway, not sure what is true anymore. Lol


Nothing on that P.O.S site is true and you'd do well to stay clear of it if you want to be taken seriously.

I find it interesting that I give good reason for a massless capability of a vehicle and nobody wants to take that up. They go off on ion drives, etc. that still don't escape Einsteinian physics. Not very forward thinking.

I have, someplace, and old clipping from Popular Science as I recall from about 1962 in which it was stated that at that time there were 15 different universities and laboratories in the US that were working on anti-gravity/massless devices. One must wonder, was all of the efforts fruitless in their trying to copy the all too obvious UFOs, or did they hit paydirt and the whole business went underground and eventually emerged in the mid-1970s as the triangles?

Aliensun
One must wonder, was all of the efforts fruitless in their trying to copy the all too obvious UFOs, or did they hit paydirt and the whole business went underground and eventually emerged in the mid-1970s as the triangles?


My guess is that they were only able to come up with some basic theoretical work on the problem of anti-gravity, and that it was determined to be beyond our capabilities into the foreseeable future. Then the funding was cut in the mid-1980s, and focus was shifted to approximating the performance capabilities of UFOs using lighter than air, electrostatic and stealth technology.


I think the way ahead where FTL propulsion is concerned lies in our understanding of inertia. Once we have this pesky concept better understood then maybe we will be able to progress further along the road with our colonisation requirements. Still need to locate a second Earth all the same.
edit on 6-12-2013 by andy06shake because: (no reason given)

proposed by Miguel Alcubierre in his 1994 paper "The Warp Drive: Hyper-Fast Travel Within General Relativity".

The idea of warping space around an object was around before this guy, wow startrek in 60s used the idea. Im sick of seeing some physicist come along and do some calcs and get the credit for an old idea.


One thing is fantasizing about it, another thing is actually doing the hard numbers and the physics. You can bet the first ship will be named after one of the Trek-ships....

One thing is fantasizing about it, another thing is actually doing the hard numbers and the physics. You can bet the first ship will be named after one of the Trek-ships....

without the imagination of the idea there is NO numbers or figures. The imagination beats the crap out of any maths problem. And that physicist should no go down in history as the man with idea.
edit on 6-12-2013 by AthlonSavage because: (no reason given)


Can you come up with another scientist who has been able to make it work within the limits of relativity? But I will edit my o.p. to say he didn't first propose it, is that ok? (Edit: looks like I'm too late).
edit on 6-12-2013 by Utnapisjtim because: Added the parentesis at the end


Gets his calculations and put them up for us all to see instead of sticking him on a pedestal. Then we will all see how incredibly tough his calculation is and from that we will judge collectively what credit he should deserve. if your not willing to do that then shut up.