Venus likely to be misidentified as a UFO again 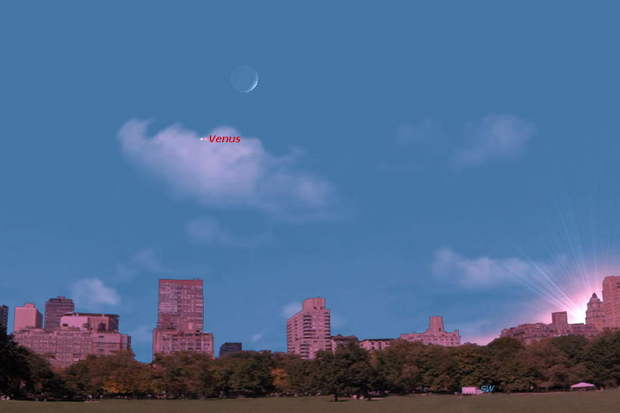 How to See Venus and Moon in Daytime Sky Thursday


Not likely to see it here. Storm of the century is battering us.

posted on Dec, 5 2013 @ 04:17 AM
link
It was a clear evening yesterday, Venus looked beautiful, so much brighter than everything else. It's a shame I've "misplaced" (not lost!!!) my decent binos, nevermind, there's always the next clear night.
Definitely one of my favourite sights in the early evening sky, especially as it can outshine nearly everything, and London's light pollution doesn't impact it at all.

Can't wait to get a good look at the pleiades, i gasped in astonishment the first time I saw them. Stunning.


Exactly. When Venus starts whipping around like a hummingbird, I'll buy this default-debunker-Venus-theory.


Have a good one

I find it kind of amusing that folks can mistake Venus for a ufo,don't they know their "piece of sky"? I mean,as the year passes,the positions of more or less which is where? Like the positions of Venus,Sirius,the brightest stars-i don't know the names of all of them,but I know which ones belong where,and so even on nights when they are most scintillant+breathtaking,one Knows that is a star.I used to just call my biggest+brightest faves MyStar 1,2,3 etc
Its best to know what is normal for the sky in one's region,I think.

This turned out to be ORION

It's quite very common for people to mistake planets and stars for UFOs. Usually it's Venus, Jupiter, or Spica.

Usually it's Venus, Jupiter, or Spica.

Lots of things get mistaken for Space jockey's

Many people are surprised to learn that virtually 90% of all UFO reports can be and have been explained. The major argument seems to be over whether the remaining 10% is "noise" or "signal". Herewith, a list of things which have been the primary cause of UFO reports in the past. It's a list that any investigator should be aware of when studying a particular report. It was compiled by Donald Menzel, a noted debunker of the 50s and 60s, who characterized this list as "minimal and highly abbreviated". (From "UFOs: A Scientific Debate", Sagan and Page, eds. consisting of papers presented at a symposium sponsored by the American Association for the Advancement of Science, held in Boston on Dec. 26-27, 1969, ISBN

posted on Dec, 5 2013 @ 11:51 AM
link
Venus 'moves' fast enough that after a week or two of cloudy weather or just not being out and about at twilight, it's a 'new' object and can startle people. There was a Russian airport about a dozen years ago that was shut down for an hour when a flight crew taxiing for takeoff reported a UFO hovering at the end of the runway. Jimmy Carter got spooked by Venus. And yes it does seem to dance around sometimes, and scintillate colors.

My most extraordinary experience observing Venus was watching it rise from behind a rocky massif east of my hotel, and realizing that it took a finite time -- at the range to the cliff edge, about ten seconds -- to transition from invisible to full bright. By stepping left and right, I found I could dim and extinguish it, then 'rise' it again, a matter of about 20 cm in position shift. Stars, of course, blink on or off when occulted, instantly -- no ramping of brightness. I was detecting the non-zero angular size of the planet. It was awesome to realize that even without a telescope, but a good guess at the scale of the solar system, I could 'guess' the planet's diameter to within an order of magnitude.

Try this at home.

As someone who looks at the sky quite frequently and who often introduces people to it through a set of binoculars or small telescope, Venus under the right conditions can look very "weird" to people who have never seen it that way especially under certain conditions (low on the horizon with lots of atmospheric scintillation).

I can't tell you how many times I have read accounts or saw youtube videos where someone said, "whats that bright thing in the sky? I'm gonna go get my binoculars/iphone telescope/etc and have a look at it. Dude look. DUDE! It's changing colors!!!! Look how its MOVING, that's nothing from Earth...."

And they'd be right. It's Venus. But not aliens.


Its best to know what is normal for the sky in one's region,I think.


Yep. I encourage everyone to get familiar with the sky. One of the greatest shows on earth takes place above our heads every night and most people are oblivious to it


Exactly. When Venus starts whipping around like a hummingbird, I'll buy this default-debunker-Venus-theory.


Have a good one

Ahem..... Here is one of the more rational misidentifications. At least they provide date, time, location and direction they were looking. What they however didn't do was look for which planet or bright star was in that location before posting it up on Youtube as a "UFO" video.

Which if you look at the comments below it, a lot of people bought into.

That fact is that Venus, Jupiter, Sirius, Spica, and other celestial objects often get misidentified as UFOs by people who are not accustomed to seeing them.

Once I found out the runway orientation, and ran heavens-above for the place and date, there was Venus shining right at the end of the runway.

I talked about it in an interview here:


You really take some people here for idiots... You will be surprised to know, not many are that clueless.