Britain's Met Office said wind gusts could be as strong as 145 kilometres per hour in the north and west of Scotland.

There was also potential for "significant flooding" across the country, it said, warning that the public should be prepared for travel disruptions along coasts.

A mixture of snow and rain accompanied by Arctic temperatures was also expected as the storm called Xaver neared.

Hamburg was expected to be among the worst-hit regions, and its airport already was warning passengers Wednesday to be on alert for delays and cancellations.
London South East

Northwestern Europe is bracing for a severe storm that forecasters say likely will bring gale-force winds and flooding in coastal areas.

Ferry operators canceled services to some of Germany's North Sea islands and the country's national railway, Deutsche Bahn, warned of likely disruption across a swathe of northern Germany.

The German Weather Service said the storm front, which was gathering strength as it headed eastward from the Atlantic Ocean off Greenland, would also bring polar air to Europe — meaning that it could bring snow to low-lying areas.
ABCNews

Here we go again, another storm. Weather is messed up here. It will affect many countries around North Sea and Baltic Sea. Though US hurricane season was quiet, North Europe gets more storms that normally. 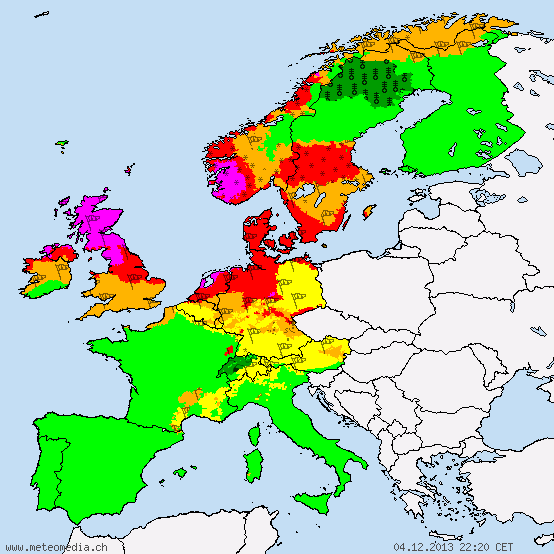 The main difference between this storm and the storm from October is that this one is coming from the Northwest and at the same time with a new moon (yesterday). The tide will be much higher so the countries surrounding the north sea will have a springtide. As for now the mainland countries are expecting a tide just below dangerous levels in the UK there are severe flood warnings.

There are now 99 flood warnings and 23 severe flood warnings in place in England and Wales. 22 of the severe warnings - which mean "danger to life" - are in the Anglian region which covers much of the east of England. The Environment Agency has also warned that England's east coast should expect "the most serious coastal tidal surge for over 30 years".

From the same link and as posters in the other thread mentioned Scottish railways are on hold and Glasgow station is evacuated due to debris destroying the glassroof.

Good luck to the ones in the middle of it
edit on 5-12-2013 by Dumbass because: linky for image

I have seen worse!

I'd describe the weather as "windy"...not as windy as it used to get in the 80's BTW


Also in the middle of it. But here in the Netherlands it is not so bad. Even though we have a CODE RED active right now. The wind is startin 2 act a fool right now but i think Germany and England got it worse. I just hope my cars stay safe as im trying to sell them

(Had a crazy dream tonight that all elektricity was down for days!!!)


Most public offices, buildings and schools are being shut down in northern Germany till Saturday.

posted on Dec, 5 2013 @ 05:17 AM
link
Will this one be as totally devastating as the last storm of the century when a few lightweight pieces of garden furniture got blown over?

posted on Dec, 5 2013 @ 05:37 AM
link
Hi Thebel, I hope you don't mind but I have linked this thread to the British Library thread so Brits can be updated and keep a record of it.

Thank you for the thread, I knew we were getting winds but I did not know it would be this bad, I'm trying to cut down on news channels for my mental health!

posted on Dec, 5 2013 @ 06:07 AM
link
Better to err on the side of safety people.
PEople were downplaying Hurricane Sandy when they should have been getting ready instead.
Get prescriptions filled, buy convenience foods, Candles, batteries, fuel, tie down loose furniture outside, bring all your pets in early.
Stay safe and stay put.
Curl up with a friend and a good book.

posted on Dec, 5 2013 @ 06:24 AM
link
In Denmark, the railways are closed and some bridges are closed, like Great Belt Bridge. One person has died in Scotland when his lorry was blown on top of 2 cars. 100 000 homes are without power in Scotland.

The storm is expected to hit in Hamburg sometime during the Friday. Hamburg is expected to get worst of the storm. As the storm arrives, it will bring the cold front and temperatures could drop, and storm could bring heavy snowing or sleet. It will also bring high tide, water levels could rise by 1.5 - 2 meters. 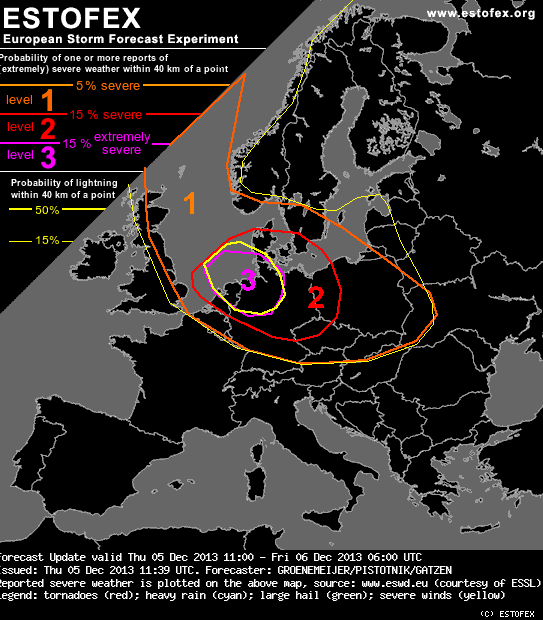 Please refer to the original forecast.

A convective line with ample lightning activity has developed along a cold front across the North Sea.
This activity is collocated with the left exit of a particularly strong mid/upper-level jet streak.

Near the line, a very strong low-level wind field is in place with wind speeds around 40 m/s at 850 hPa. A combination of downward momentum transport and squall-line internal dynamics will likely be capable of producing gusts of around 35 - 40 m/s.

The line is expected to move quickly SEward reaching the Dutch, German and Danish coasts during the early afternoon. Upon interacting with boundary-layer induced friction over land, storm-relative helicity ahead of the system should increase strongly with NWP guidance yielding values in excess of 800 m2/s2 0-1 km SRH. At the same time, buoyancy should gradually diminish as the air ahead of the line gradually becomes drier. Nevertheless, some risk of tornadoes will exist, which, if they develop, may be strong.

During the 16 UTC - 18 UTC time frame the storms will likely start to reduce their intensity, but it is well possible that some linear convective activity will continue to progress well into parts of the Czech Republic and western Poland. Some convection may make it even further east across Slovakia, eastern Poland and the western Ukraine overnight.


Down South, it is a bit gusty, but the reports from the North and Scotland do show some severe windy and flooding. Granted, it isn't anything "major" but you have to remember that it's effects can be highly localised.


Up here we did all our storm preps yesterday..

Here in the Outer Hebrides wind speeds that were recorded on Isle of Lewis were between 85mph - 117mph..! We were in the middle of it..

Luckily not much damage here.. Few things missing and/or broken..

It was awesome... The thunder was SO loud, lots of fork lightning hail/rain/snow... My poor dogs were so scared they slept under the duvet with me.. It got quite worrying at about 4am. I thought the wind was going to suck our windows out..! But I felt pretty safe as I live on an Ex RAF camp and our house is a concrete bunker with roof and walls 1ft thick...

Got a few puddles in the house this morn. The wind was that strong it pushed it through he gaps in the window vents and doors.. Winds about 50mph here now. Which is grand we used to that. Sea looking pretty rough - some beautiful big waves..!

Saw on the news this morning that sadly the storm has so far claimed one life. It was a lorry driver...

My family are on mainland Scotland and their village is without power. Plenty trees blocking alot of roads and snow is forecast..!


Wow...you've been hit hard, it sounds. I hope your dogs are ok. Mine is fine, but really really not keen on going outside. Still very windy here in Aberdeenshire, and starting to snow. It's not the worst I've seen by a long way, but so many trees down on the roads, travel is very difficult.


Aye we've seen worse too.. I knew we'd be fine..! But I was worried about the windows getting sucked out. I had to let our stove die out as the pressure building in there was mad..!

Aye my black Lab Blake is no bother in a storm. But our Collie Tiree well he was petrified poor thing..! He rarely jumps on the bed but he was frightened lol..

The lightning was super cool though - really surreal..!

Holy crap..! You live in Aberdeenshire...? My family are in Aboyne and are without power. But they got gas stove and candles so they not worried. It is just the travel. Got a call from my bro saying there was trees down everywhere... He is meant to be coming up to visit me on Monday..! Dunno if he will make it or not..


Lol well when I lived on mainland Scotland there was one year we had -27C and 7ft of snow. That don't bother me. It is not as dangerous as the wind...

Especially up here. If you go outside even in the 50/60mph you have to be careful as you can get hit by debris flying aboot...

Our front porch was flooded this morn.. Doubt peeps are really crying about the rain tbh. It is the wind that is dangerous....

I would hardly say its the storm of the decade though. A few years back winds reached 130mph up here.. But peeps are funny about the weather. I am not complaining though. Not after the Typhoon that hit the poor peeps in the Philippines....
edit on 5-12-2013 by fluff007 because: (no reason given)


Aw weird...I'm about 6 miles from Aboyne, and we still have power, although Torphins is out too apparently. Hope they get it back soon. I fully expect it to go out at some point here. Got hot water, stocked up with logs and coal, but just don't want to risk driving....trees are all over the roads.

Well I am surprised we never had a powercut up here. Usually if the weather is bad we get them. I was all prepped and ready lol.. But no need. I do not mind powercuts though they can be fun..! I think the winds are gusting up 77mph on mainland Scotland.. My bro also said there was power lines down too. Doubt many folks will be travelling today...!

As long as peeps are warm and have food methinks they will live lol...!!