This is something new and wild. I guess there have been doom talk wrt Comet ISON, however I just came up reading a German astronomy Web site that says this (Google translated):


" An interesting turn in the case of Comet ISON: Sergei Smirnov, spokesman for the Observatory Pulkovo announced in St. Petersburg, lost the "century comet" in his "Kiss" with the sun, although a hundred times in brightness , but was by no means completely destroyed. Is that the comet's tail can still be seen "in the form of a little contrasted elongated cloud" means that the comet was not disintegrate into a cloud of dust, but that continue after the destruction of the core of ISON larger chunks of the celestial body course on the earth take. Had the comet survived the sun passage notwithstanding, he had on 24 December orbit crossed in secure 65 million kilometers away. The fact that the core of ISON broken into pieces, according to the experts has led to a sharp slowdown and a change in the web. The comet tail and the fragments of that due to the original date of perigee "Advent comet" ISON itself according to Smirnov reach Earth orbit a week late. "It might even be serious," "The inhabitants of the earth, a surprise awaits New Year's Eve," the researchers, the comet with the Russian fairy-tale figure Snegurochka (German: "Snow Maiden"), the faithful companion of Ded Moroz, compare. Retrieved from "Snegurochka" was either a friendly "farewell smile" to be expected in the form of a shooting star night - or a potentially momentous meteorite crash. "New Year's Eve, but also of 2 up to 4 January 2014 is to be expected an increased meteor activity. This can manifest itself as a bright flare of tiny meteors in the sky when these burn up in the Earth's atmosphere. But even more threatening manifestations such as a meteor shower can not be excluded, "the representative of the Russian observatory is convinced. Christmas surprise: shooting stars or meteor ? Astronomers can reduce the likelihood of such an event after careful observation of the speed and brightness of the comet fragments indicate so Smirnov on. The last date for more accurate predictions is the 24th December, when the ISON-cloud crosses the orbit. "It could be serious," said the spokesman of the Pulkovo Observatory. A not uninteresting for mystics, astrologers and Eschatologen fact: The Earth needs the left by ISON comet cloud according to Russian sources, probably on 4 January 2014 through hike - at the same time a planet Parade: Mercury , Venus , Earth, Jupiter and Pluto . located on at this time - albeit on a very generous thick - line with the sun , the comet S/2012 (ISON) was in September 2012 by the Russian astronomer Artyom Nowitschonok and his Belarusian colleague Vitaly Nevsky in the observatory Kislovodsk (North Caucasus) have been discovered. The Russian Observatory is part of the International Space Observation Network, the comet was baptized on the English abbreviation of the research institution. (RIA Novosti) 30.11.2013"

By the way, for what's left of Comet ISON 2012/S1, there is no update to the MPC and no one knows for sure the true coordinates.

Could this be?
Will ISON bring fragments to Earth?

posted on Nov, 30 2013 @ 03:48 PM
link
Also, the prestigious Max Planck Institute's research suggests there there at least two parts to the Comet Debris/Dust tail (parts or fragments could be more)Google translated):-

"The dust tail of the comet is now divided into two parts," explains Hermann Böhnhardt from the Max Planck Institute for Solar System Research the images. The part of the tail, pointing towards the sun, is loud Böhnhardt from dust particles well before the Perihelpassage - were released - so before reaching the sun next path point.

The other part, however, appears to contain more recent material: It was issued during the flyby and suggests that at this time, at least a part of the core still existed and was active.

The Max Planck researchers base their assessment on computer simulations in which they model the shape of the dust tail. "If we assume in our calculations that the comet has emitted dust at perihelion, we can use the current images reproduce well," says Böhnhardt.

The Lasco images from Saturday then showed that dust had ceased its production ISON two hours after the Perihelpassage. Whether the comet nucleus at perihelion was still intact and went on his way as a small fragment or as an ensemble of fragments, is not yet clear."

posted on Nov, 30 2013 @ 03:58 PM
link
just had an idea,, what if ISON is like a dump truck for the sun,, u know,, attracts,,collects ,,exotic metals, to its core,,in its journey through the cosmos,, then faithfully every X number of years on scheduale,,drops its load off for the Sun too replenish, its appetite

posted on Nov, 30 2013 @ 04:28 PM
link
This is a video of the LASCO 3 images...to me it looks like its fading...but the funny thing is, on the comets ml on yahoo groups, there is some serious discussion about what this means and how scientists should report their observations on the ml because the 'laymen' on the ml can get confused...

Please ignore the poor quality of video..its recorded on my mobile via an app I generally use to view images from the sun.


... for what's left of Comet ISON 2012/S1, there is no update to the MPC and no one knows for sure the true coordinates.

It is a pretty clear example of how we are all... all of us, under the thumb of the so-called experts and labs and government offices... just as we have always been.

Is that a statement of negativity to those experts? No... not at all but, it does speak to the dependence the masses have on those with those titles. There are very few exterior sources for options. After that? It's just another conspiracy theory... something that is already under a shadow.

posted on Nov, 30 2013 @ 05:07 PM
link
The lastest pictures seem to indicate that Ison has expired once again, only a wispy tail now. It's not likely then that much in the way of large fragments are left, and if there were, it's also likely they would be detected. In fact a 5 metre rock whizzed by Erath at 0.4 LD on the 29th, when Ison was getting the attention. I wouldn't be surprised if there were a plethora of shooting stars though. 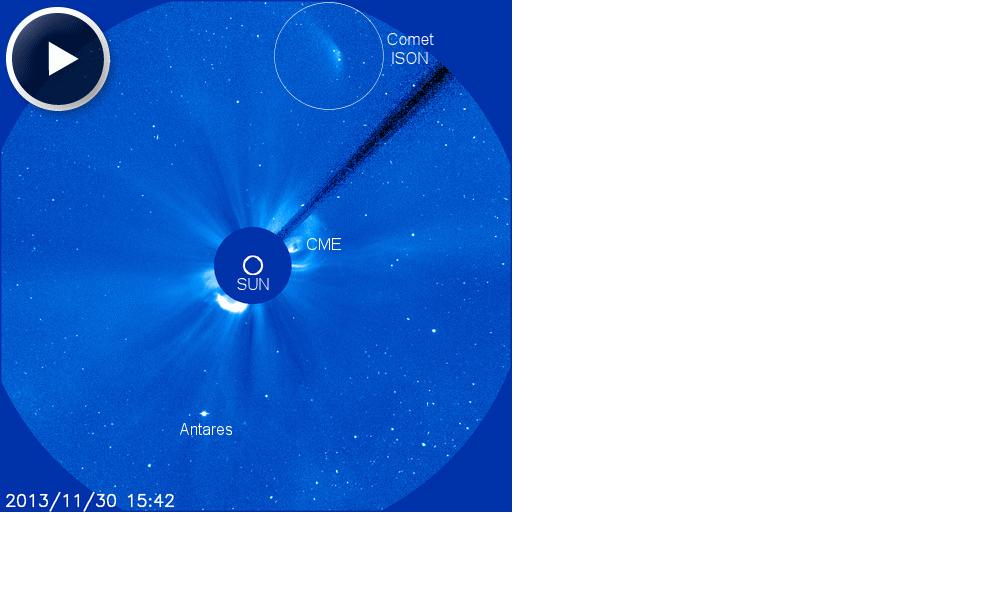 posted on Dec, 1 2013 @ 06:27 AM
link
To get any sort of meteorite show from it, the earth would have to pass through the tail. And as far as I'm aware the earth doesn't get anywhere near Ison?

posted on Dec, 1 2013 @ 08:47 AM
link
New years eve fireworks sound great. But they are saying it may be spread out to January fourth. I hope we aren't in the middle of a snowstorm

posted on Dec, 1 2013 @ 09:51 AM
link
Crazy super sonic solar blast occurred while Comet ISON S1 was at perihelion on 28th November 2013.
Please watch this link as soon as possible and look at how exactly on the time frame the comet was 'hidden' from us...A huge explosion occurred which produced the shock wave. I can just say WOW!

Am just excited but maybe this shock wave is the only tangible evidence of the comet suffering an explosion. Was it caused by the heat or space weapons...shall remain a mystery


darn...neither of the two comets that are whipping around the Sun are going to meet the prediction of "the Popes comet or the two Suns" astonishment of men

"This is a unique coincidence," says Ron Vervack an astronomer at the Johns Hopkins University Applied Physics Lab and a member of the science team for NASA's MESSENGER spacecraft, "and a golden opportunity to study two comets passing close to the sun.”

On Nov. 18th Comet Encke will pass within 0.025 AU of Mercury, followed a day later by Comet ISON at 0.24 AU (1 AU is the distance between the sun and Earth, 150 million km). The MESSENGER spacecraft, which is orbiting Mercury, will turn its sensors toward the passing comets for a point-blank investigation of both.

a good 400 meteors per hour sky show would do


but are we certain that the broken up or radically altered comet is ISON rather than ENCKE...scratches head