Humans on the other hand...... They get you to thinking they are trustworthy, maybe even nice, then unlike an animal, they will turn and act in some way completely contrary to what they have made you believe

After a lifetime of dealing with them, an advanced degree in psychology and yes, even hunting them; humans as a whole are as I have described.. IN MY OPINION

In one aspect or another

Marines and Law Enforcement in many capacities in several states
edit on 12/1/2013 by semperfortis because: (no reason given)


So you legally 'hunt' humans. Well why didn't you say so. I wouldn't have mentioned the horrible illegal plant, and cause trauma. My apologies.

Yes I can understand how someone who hunts human prey would need a 'little rest'...from all that madness, you know, surrounding them.

I had more sense than that when I was 10


Since this is the philosophy forum, is it possible that there is more than just either/or?

The video you showed was repulsive, I must admit. As I wrote earlier, I didn't watch it all, it was too uncomfortable. But... man is a social animal, and we adapt both to environment and to expectations.

Is it possible that on Black Friday people think they should behave in a certain way, and so they do? I think another poster mentioned that her daughter wanted to go, to experience it, as if it were a very specific event, with it's own rituals and behaviours.

If however, that video clip just showed a pretty much average day of American shopping, then I have no idea what to tell you, and would have to concede to you on all points!


I think you are correct in that people feel it's expected on Black Friday, for weeks in advance retailer promote their sales aggressively and there are very limited quantities of so called door-busters. I go to the sales but mainly at the fabric store JoAnns because I can get what I need to make things for my family; yes I'm one of those who makes most of my Christmas gifts.

If my reading comprehension is correct semper is unhappy with the selfishness and total disregard for decency shown in that video. I respect that but I still firmly believe there is more good then ill in people.


Oh good heavens quit trying to make semper out to be some monster he isn't.

He's a cop and by all accounts a good one I believe his hunt would better be described as an investigation and frankly in his line of work and mine we see some truly horrific things; so yes it's hard not to lose hope in humanity.


im assuming you are prior service...same boat here...after i came back from 2 deployments and various trips i just never really fit back into america....looking to leave again permanently after I visit with family over the next year.


Me too. I don't like to think of that video as demonstrative of us all as a species, all the time. It feels a bit alien to me, I must admit. Trust money and manipulation to be at it's root, though.
Your post helps to explain Black Friday too, thanks.

As an aside, I'm just finishing off the last of 4 home-made quilted Christmas stockings for my children. I love home-made stuff too. Thanks for your response.

posted on Dec, 1 2013 @ 09:37 AM
link
Have any of you watched that show; When Animals Attack? Would it be nice to a bear open a gate and tear someones head off and then walk home?

What ever landmass they have left to go to anyways! Here we move into their area of living and what, they are to behave normal as the show intended it to be. Yet unless you happen to come along a bear in the woods someday, most will turn around or if its baby time, back away slowly and hope you can blend in with a tree!

I would like to say that the only animal that actually attacts is of course Man! Animals just do, do not plot, have no understanding of getting even. As I see it, they wish we would leave them alone! No, can not do. Must put them in a Zoo so the children can see them: Being locked up, of course! Cages Should be for Man and Man Alone!

Where I live, anything that moves is game! Sad if I say so myself. So it's deer season, they do not get one so find something else to kill since they are there anyways! Other then birds and some stray cats, nothing else moves! Excuse for any type of animal doing nothing, but to shoot it since it does move!

How would you like to be placed into a cage, moved out of your homeland and be hunted everyday? Why are we defending Man anyways? It would take just a small Stone to cause a panic, and once again we see this every Black Friday. Say the Elect went out, gas is so high, bad crop year, now what?

I do not think Apes were even this bad, if we did come from apes anyway. It would not be a bad thing if say 1/2 of the popalation were to go missing due to say The Hand Of God.

Maybe then we might actually Learn something about Humanity! One would have thought by now we would have some Idea of it anyways! So far I see some Kindness out there, getting less everyday though. I can understand what Eistiain said long ago.

If we go to fast with Tect, we will have a race Full of Dumbies! 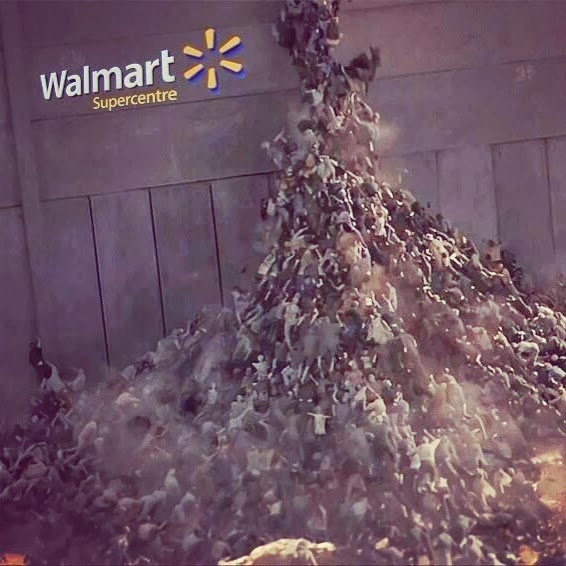 
One of the Best times to go Trash Picking is a week after X-Mas!

Pic on pic, 2 even! All was lost was the remote, $9 is what it costs to upgrade!

A little side-topic-joke here:
Why do smart phones exist ?
To compensate for the dum dudes using them !! B-)))

And ON topic:
If you want to have a little idea how "smart" humans are?
see the top 10 or 15 of the "audience ratings" of TV shows.
Do you see ANY Nature, science, NOVA. . .UP-LIFTING shows ?

posted on Dec, 1 2013 @ 04:40 PM
link
I believe the human suffering is part of a greater concept , the suffering leads to greater intellect to evolve the human soul that once returned will lead to a better person. I think it will take many millenniums before we finally come to this stage that we are one and all at peace with eachother here on earth.. but outhere time and space are non existent and everybody is equal...

So yes we have to care otherwise there's no place to come back too...

The problem here lies with the idea of mercantilism. Simply put: people taking something, moving it around, and getting paid for it does not actually improve merchandise being sold. The ancient Chinese set up their social hierarchy in such a way that merchants were on the very bottom. Nowadays, one could argue that this has been completed inverted, as Walmart rakes in billions and the corporate CEO's are ontop of the world. This is the result. Externalized costs to the extreme!

Further research led me to this site:

Not so funny meow!

posted on Dec, 2 2013 @ 12:22 AM
link
I am curious to know whether or not this is actually worse than in previous years? is there a marked increase in the behavior or in the marketing strategies to implement this behavior?

I don't track this sort of thing. but I would like to hear from anyone who has more than a few years making such observations.

posted on Dec, 2 2013 @ 12:45 AM
link
This thread is timely for me. I am currently feeling a frustrated melancholy because of the lack of care I see around me.
I work in a hospital and what I witness each day is my colleagues involved in petty dramas, seemingly out of boredom, and quick to throw a patient under the bus just to spite a rival service or colleague. It is horrifying to me, to imagine that we are there to care for the sick and suffering, but most are really just there for the pay check.

That I am the only one who finds this screwed up drives me insane to tears.


Sounds like you were lucky enough to live in some isolation and protection from commercialism. Others live in small apartments with the flashing neon signs over their doors. Pity they have no say over how fast or how far corporate Industry will go to take the Thanks out of the Holiday. Corporate entities set up Black Friday like a media event, they offer a ridiculously few items at the bargain price so people have to aggressively fight over them or lose them. This adds to the frenzy and whips people into a mad froth where survival of the fittest takes over. There is no mercy for the slow or the weak. lol When people are in a mob they act differently than normally but even that is no excuse. The repulsive, savagery of humans cannot be underestimated or matched by any creature.