posted on Nov, 30 2013 @ 03:26 PM
link
I have spent the majority of my 50 + years on this planet in the company of species other than Homo sapiens.. For that I thank God every day as my life has had meaning and at times, a peace not attainable in the company of other humans..

Strangely enough for over 30 years I have been in one uniform or the other protecting creatures like this.. (I initially called them animals but that is a dark stain on the name animal)

I can not fathom such greed, such avarice, such a lack of regard for everything we have always associated with the word humanity..

Every other species on this planet I understand

Not the major cities mind you, but the country side where the lifestyle has changed little in centuries..

Peace through service. I guess I learned much of what has shaped my life through interaction with these amazing people...

I also learned to be mostly revolted by my own countrymen.. Yeah.. Revolted is a good word to describe what I see in my country...


There are humans out there who do care about each other, but I'm afraid that they are far and few between.

I blame both greed and materialism for how the human species turned out.

I think we need to realize how fast we're plummeting as a species, or we're going to blow ourselves to Kingdom Come and become extinct.

Maybe the Earth would be a whole lot better without us.

Maybe this will help you semper.

But I agree we don't look too good at times. hehehe

But neither do the animals. Don't hate me now!

Just for this Weekend we decide if the People Have any Money to spend for the Year! That's why we are SLAVES! If No one actually spent any money on THIS WEEKEND, It would SHOW how Broke we really are!

Too Bad it was PAID on Credit! Well to be nice to the Humans say 25% CASH!

Still wondering WHAT A SLAVE IS?


Ooh, your video was a bit weird! I couldn't watch it all, sorry.
Sometimes it's necessary to get outside for a long time, away from everyone else. I love going down to the sea (ignoring all the fish-on-fish massacres taking place out of sight) just for peace.

We're not so bad, sometimes. Sometimes it takes a disaster to shake us out of our complacency, and pull together.
There was an awful accident in Glasgow last night, a police helicopter crashed into a pub. 8 people died, with more injured. But all reports talk of passers by running into the pub to help the injured get out.

Anyway, animals aren't all so brilliant. My dog sent me spinning a full back flip over the gate this morning in his desperation to examine a twig. The git.

posted on Nov, 30 2013 @ 03:56 PM
link
It's the "herd mentality" and it is sickening to watch. I worked at Wal-Mart on 3rd shift for 2 Black Fridays. We would have to stand beside pallets of goods until the time came and then "cut & run". That is what we were instructed to do. Cut the plastic and run. They build up the tension on purpose to make folks feel like they are getting some kind of "PRIZE" instead of a product they are simply paying for like they would any other day of the year.

I know this thread isn't about Black Friday though. This is about the behavior. And this behavior does happen on every other day of the week within our species sadly.

BUT----- Look at how many more people there could be doing this. Think about how many people deliberately stay at home to avoid these situations and the people who flock to them. Millions more DO NOT participate in this dumbassery. That is all I can say to comfort your spirit right now. I get the same way. I saw it first hand and could not believe people acted like that. It is disheartening to say the least. You do lose some of your faith in mankind, but you always have to look for the "saving graces".

These people are only a minuscule number in a sea of other people with compassion, morals, standards, etc. We see these people more because "good doesn't make the news".

I have to believe we are still good. If not, all hope is lost and you can never recover from that.

posted on Nov, 30 2013 @ 03:56 PM
link
There are the good and the bad about our species.
I, too, share your disgust in our species.
But the is also beauty to be found, through music, literature and art.

With all the natural beasts and plants in the world, I feel we are an invasive species, as if we didn't really start here, but from some other place and we just took over.

Here is a little info graphic about what we do share with all the other species in the world........ 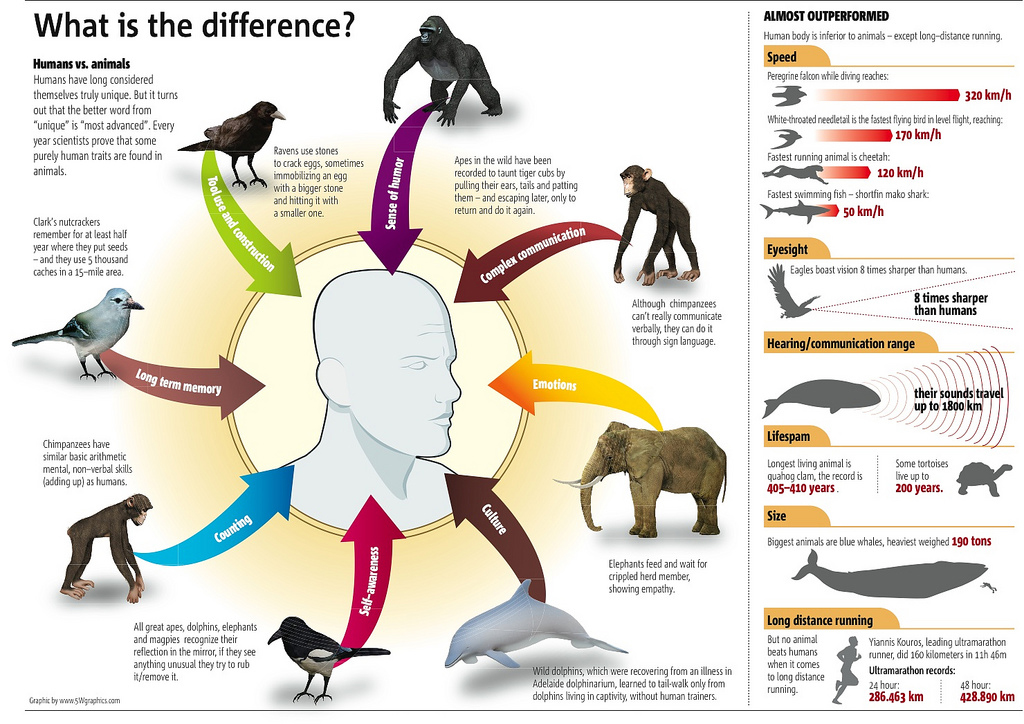 Just my humble opinion, nothing more.


That video actually brought tears to my eyes.
Why OH WHY???

If only people could afford things through out the year, I think that we would see a LOT less of this!!!
I blame the retail industry for allowing and creating THIS!!


Judging from the behavior of those involved with the last "food stamp" debacle... it's less than 3 meals for some.


As a member of this species yourself, are you also to blame for the world's misfortune?

I lay no blame on anyone I would not also accept

of which you are one of them.


Why Do We Even Care About This Species?

You were asking about homo sapiens but that is a mistake. The video shows what I call "Homo Devolvis" a degraded, degenerate and devolved branch of Homo Sapiens. Not to worry, most of them will become extinct after the first SHTF crisis hits.

The human population will begin to noticeably be decimated within most of the lifetimes of contributors at ATS.

It is complete necessary because of the fast advances in robotics, and 3D printing, the first printers will be in best buy within 3 years and cost less than many of today/s computers. Thus decimating nearly all job for human beings who can not program software or work on computers and robots. Fortunately the government has been encouraging faster population decimation by glamorizing the homosexual lifestyle, and other measures. Have you noticed all the magazine articles lately about the joys of childlessness?
Sex selective abortion worldwide will make the current population decline to accelerate. Killing females before birth will greatly accelerate population decimation since males can not bear children.

All industrialized countries have now fallen below replacement rate for quite a while.

Even Mexico has fallen to within .01 to being below replacement rate.

The countries that do exceed replacement rate births have infant mortality rates that cancel out their birth rates.

Even Arabic countries are not forcing their loved daughters to marry and allowing them to be educated. A city for Women, no men allowed is now being built in an Arab country for these women.

So no worries my friend, the human species is doomed even if there is no nuclear war in the middle east.

Fortunately the government has been encouraging faster population decimation by glamorizing the homosexual lifestyle, and other measures. Have you noticed all the magazine articles lately about the joys of childlessness?

I have! It is quite evident.
Could it be implementation of Agenda 21? Hmmm
Could it be the demasculination of our male gender?

I have no doubt our species is on its way out, with the possible exception of the elite and those who can afford food. It is a sad time for our generation. I would not give it 12 generations but more like 3 or 4 at most.

Well, the nutters should take solace in the fact that if there was a depopulation agenda, it would not involve FEMA camps, but instead posting "door crasher" sales at Walmart and routing in some bio-agent in the ventilation system…