posted on Nov, 29 2013 @ 06:24 AM
link
I believe the Egyptians were very smart people. I believe they studied sound, magnetism, and electricity in great detail, and they documented their findings in carvings and paintings to teach others. I also believe that archaeologists have a tendency to look at these carvings and paintings, and assume they were created by unintelligent people, and also assume almost all of it is religious in nature. In the end, they overlook what might be something else all together.

With that said, I wanted to bring this particular image to the attention of many:
Wiki

The image is from Wikipedia, and the description of the image is as follows:

The sun rises from the mound of creation at the beginning of time. The central circle represents the mound, and the three orange circles are the sun in different stages of its rising. At the top is the "horizon" hieroglyph with the sun appearing atop it. At either side are the goddesses of the north and south, pouring out the waters that surround the mound. The eight stick figures are the gods of the Ogdoad, hoeing the soil.

The painting being a depiction of their beliefs of creation seems plausible. However, what if that is completely wrong, or told to us to hide something? Maybe to hide information about Egyptians studying electrostatics?

Look at the two round objects in the center that are connected by dotted lines... Does it not remind you of an electric field between two unlike charged objects?

If you are unfamiliar with electric fields, just google "electric fields" and look at the images. Since electric fields are invisible, we often use paper confetti or other simple tools that easily react to electrostatic to help us see the fields. What if those stick figure men in the image are holding devices that help them detect and visualize the electric field?

You are probably wondering about the two jars... and why electrons would be coming out of two jars... unless you are already familiar with "Leyden Jars".

Leyden jars were used many years ago to "store" static electricity. They were one of the original capacitors.

The jars could also be "Baghdad Batteries" which many have already been discussing the Egyptians used to electroplate objects.

Now that you see this image, and my quick explanation of it, what do you think?

The description given the illustration with Goddess of North and South, as well as other figures hoeing rowing rows would indeed seem to jive with a primitive understanding of magnetism told through the metaphor of mythological symbolism.

I recall quite some time ago there were some papers supporting that egyptians were familiar with the practice of electroplating which would indeed require some very basic knowledge of electricity.

Such isn't to say that ancient Egyptians were all that much more advanced that what's in abundant evidence and supported by the common paradigm.
Further, the statement early in the OP about Historians, and Archaeologists thinking primitive people to be stupid is incorrect. As far as intelligence goes, they were no more or less intelligent than us.
They were, however, limited to what they understood about their universe at the time.

By no means were they familiar enough with electricity to engineer domestic electric lighting, digital wrist watches, or anything such.


I wonder if the picture does not actually show dowsing for water. This would have been a very important thing to the peoples of that time and area.

I don't know that a knowledge of electrics can be ruled out, simply because they lit the inside of the pyramids by some means that did not leave smoke stains.

WeAre0ne
I also believe that archaeologists have a tendency to look at these carvings and paintings, and assume...

My experience has been that in order to be taken seriously, they have to demonstrate a point made not from one picture alone, but from as many pictures as they can find. Both from time periods before, time periods after, and even images from civilisations nearby where influences may have been transferred to or from. And these, matched together with references from the AMPLE amount of original written records available wherein they documented what they were thinking.

WeAre0ne
Now that you see this image, and my quick explanation of it, what do you think?

Or... there's the other tactic that you are using, of saying
"this one single picture alone looks a little bit like..."
therefore
"it is."

posted on Nov, 29 2013 @ 07:39 AM
link
S&F op and thanks for the thread ..I can imagine that they had a working knowledge of electricity ..I found this and thought I would share ..its about the light house of Alexandria . www.historyinsidepictures.com...

I don't know how trues any of it is but for me it's believable ....peace

posted on Nov, 29 2013 @ 07:50 AM
link
It could represent a cell undergoing mitosis:
where the lines represent microtubules, the suns are centrioles and the hoeing men are chromasomes.
link to graphic
Maybe the ancient Egyptians were into DNA recombination instead.


Looks a little like a Leyden jar or even perhaps a form of vacuum tube technolgy,

WeAre0ne
I believe the Egyptians were very smart people.

Christopher Dunn is a manufacturing engineer who wrote the book The Giza Power Plant: Technologies of Ancient Egypt.

He also makes reference to Brad Steiger's book Worlds Before Our Own, which he had read in 1978, in which Steiger wrote about the research of Joey R. Jochmans. Dunn quotes Steiger: 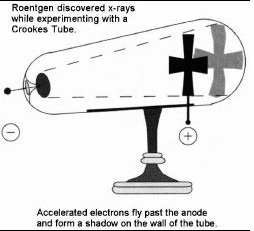 . . . The Temple picture shows one tube, on the extreme left of the picture, to be operating under normal conditions. But with the second tube, situated closest to the energy box on the right, an interesting experiment has been portrayed. Michael R. Freeman, an electric and electromagnetic engineer, believes that the solar disc on Horus' head is a Van de Graaff generator, an apparatus which collects static electricity. A baboon is portrayed holding a metal knife between the Van de Graaff—solar disc and the second tube. Under actual conditions, the static charge built up on the knife from the generator would cause the electron beam inside the Crookes tube to be diverted from the normal path, because the negative knife and negative beam would repel each other. In the Temple picture, the serpent's head in the second tube is turned away from the end of the tube, repulsed by the knife in the baboon's hand.2 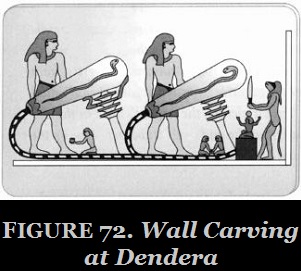