BEIJING - Beijing is waging a war against air pollution, one barbecue at a time. Authorities in the capital have destroyed more than 500 open-air barbecues "to cut PM2.5" - the tiny particulate matter in the air that can enter deep into the lungs. Photos carried by state media showed workers on Tuesday cutting pieces of metal with sparks flying as city wardens looked on.

Folks you can't make this stuff up. Talk about missing the problem and coming up with a totally stupid solution, Beijing is a winner. I guess all the factories and cars do not cause air pollution but then again as long as officials receive the proper amount of red blinders they see nothing.

Here in the south it's not as bad but still on some days visibility drops a good 50% due to the pollution which they love to call fog instead of smog. The factories have no scrubbers in the discharge smokestacks to even try and curb the pollution.

Environmental campaigner Ma Jun said residents had complained to environmental agencies in the past about the odor and smoke from open-air barbecues.

Even though the director later admits that they need to address the pollution produced by autos, he completely missed the factories and the use of coal. So of course the best they could do is go after the BBQ.

OK ATS what do you think of the BBQ problem?


Every little bit helps (and in this case every microscopic bit). I know that if I "smell" a neighbor's barbeque I have to distance myself, make sure all the windows are closed, and keep well away from the tiny tiny tiny pieces of flesh and other toxins wafting around.

but yeah like you said asinine indeed. reminds of the epa's decision to limit and exclude certain refrigerants when knowing full well it is their nuke silos doing 98% of the polluting, but they exempted themselves.


I take it you don't get many invitations to BBQ's or 4th of July parties? lol... Sorry, had to... I don't run into folks actually against the BBQ very often.


China is an interesting place. They have problems that would just destroy lesser nations from having made 100 leap of industrial revolution and transition across just 15 years or so. Some of those cities have pollution that makes Mexico City look like a crisp, clear day in a mountain meadow.

Yet someone cooking pork chops on the patio is the problem? At least the games are universal. Always blame the little guy and let the citizen feel at fault, despite the issues being far far above what any average citizen could cause or fix.


I guess a little definition of BBQ Chinese style is due. We are not talking US or AU BBQ's here. We are talking a few pieces of charcoal with the meat stuck on a wooden skewer that is about a foot long. Their large BBQ's are small compared to a real BBQ.

Of course the neighbors don't complain about the smoke and smell of the coal fired heaters they use and they stink and produce more smoke than any BBQ could ever hope to produce.


Thanks, I didn't know the cooking technique was different. I thought the Chinese would have those big chef hats on and aprons promising to "Love the Cook" and the pieces of dog, muskrat and mongoose would be flying hot and heavy off a standard European type barbeque. Maybe the government is really serious about some of this, has to clean up the air to buddy with their international counterparts, and will somehow tackle the cars next.

And I do go to bar-b-ques sometimes, and the last one, a couple of months ago, featured some of the finest bbq veggies I've ever had. A feast of plenty. No dogs cooked though, and that omission was a shame to be rectified at the next outing.


Wrabbit, it's not just air either. The water pollution is horrendous, they dump raw sewage and garbage directly into the rivers and channels. Total disregard for the environment. They will stand right next to a trash bin and throw their trash on the ground expecting someone to cleanup after them. At least it keeps the street cleaners busy and employed.

Major issues with pollution here are due to lack of education, enforcement and culture. Until all three are corrected they will not be able to tackle the pollution problem.


You're right and that shocked me greatly. I'd learned some of that quite recently when researching for the story on the dead pigs floating downriver into Shanghai. I'll tell you....the videos of the Ganges river in India are startling for pollution, people are also bathing and swimming in, as all that is floating right by. The Chinese issues are actually worse, huh?

It's amazing what we hunt for ways to feel bad about here, while looking at what can't be ignored as pollution elsewhere. Real bad physical stuff like we're talking about.

No dogs cooked though, and that omission was a shame to be rectified at the next outing.

That has a whole different meaning over here as they do in fact eat dogs and cats. Your right, what's a BBQ without real hotdogs, of course they haven't a clue as to what a real hotdog is. They have sausages they like to BBQ but I offered one to my dog and she wouldn't eat it and neither would I. Have no idea what it was made out of (said pork) but when a dog won't eat it, it's safe to say it's not safe for human consumption. 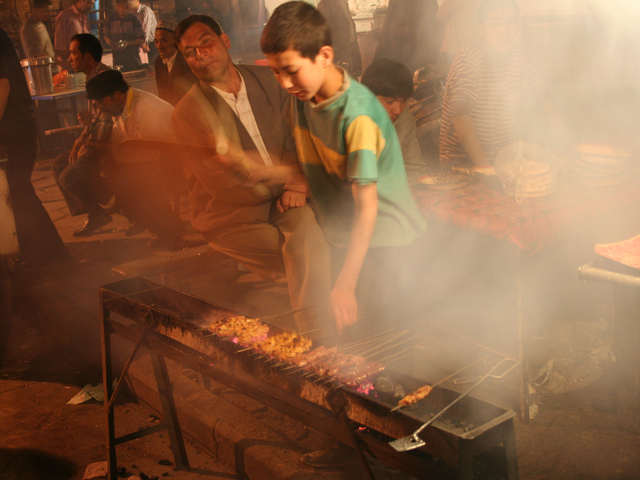 Just imagine how many of those are on the streets in or should I say outside of restaurants in Bejing.

posted on Nov, 28 2013 @ 09:40 AM
link
So go after the families who have no other source of cooking at home or heaven forbid actually make a paltry living as a street vendor?


Grand total on the pigs was around 16,000. No problem just dump them in the river let someone else cleanup the mess. It is really sad to see people fishing in the polluted channels and I have no idea what fish they catch but they take it home and eat it.

So go after the families who have no other source of cooking at home or heaven forbid actually make a paltry living as a street vendor?

I would guess with what they are doing, those who are trying to make a living, or just trying to live matter none to the government.


Thanks for posting the picture! One each genuine Chinese BBQ. They have them outside some of the small Mom & Pop eateries and they do good business. The only problem with the crack down on the BBQ's is that they only come out in the late afternoon and evenings.

Thanks for posting the picture! One each genuine Chinese BBQ. They have them outside some of the small Mom & Pop eateries and they do good business. The only problem with the crack down on the BBQ's is that they only come out in the late afternoon and evenings.

Just when most are either opening or are getting ready for business.

It is just a sad time in Chinese reality when they do this kind of thing.

posted on Nov, 28 2013 @ 10:29 AM
link
With China's drive to be seen as a modern industrialized nation, many of the cities are banning motorcycles and opting for only cars. This leads to gridlocks as the Chinese fail to obey traffic rules and have a me first attitude. They race to be the first at the stop lights and many only consider a red light a suggestion. There is no order at uncontrolled intersections and even if there is a police officer there they stand around talking on cell phones and couldn't direct a pack of hungry wolves to meat let alone any traffic.

If they managed to keep traffic moving they could cut down on pollution but then again driving is just not something they do very well. Maintaining a vehicle is a foreign concept which also adds to the pollution. In the end it boils down to the three factors I stated before; education, enforcement and culture. Going after BBQ's lets you know that they have little to no intention to addressing the real issues.
edit on 11/28/2013 by pstrron because: (no reason given)
edit on 11/28/2013 by pstrron because: (no reason given)