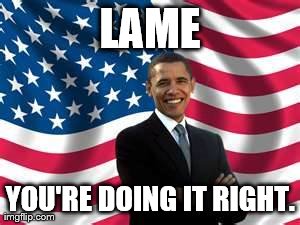 Shooting from the hip. I'm tired. I thought it funny and relevant.

Shooting from the hip. I'm tired. I thought it funny and relevant.

Probably nap time then...Although, I'm not certain if it is my nap time, your nap time or Obama's nap time.

damwel
Regardless I would vote for him again before I would ever vote for a self serving republican. What Obama has tried to do if they would let him is way better than the republicans giving my money away to the rich and killing our people in wars to feed the military industrial complex. Bush opened up my eyes, I can see them for what they are. You really believe the republicans refusal to tax the rich is to your benefit? If you do, you'll believe anything they feed you. I'm 55 years old and have been watching this game all my life and it goes a lot deeper than whether a web site works on December 1st.

I would vote for that turd my dog just let in the back yard before I would vote for Obama or a Republican. But why should I continue to assume that I have only two piles of vomit to choose from which to eat? Think outside the parties.


Obama and the Dems have put us into more wars than Bush. They openly support our declared enemy in the middle east, assisted the muslim brotherhood to gain power in Libya and Egypt, and the Republicans serve the MIC? I don't think your eyes are nearly as open as you like to think.

What do you honestly think Obama would do to this country if there were no checks and balances? You know, the ones he and the Dems are constantly trying to get rid of (but only while they are in control).

Obamacare was never supposed to help this country. It was another tool used to destroy what is left of the middle class. Everything that people hated about Bush was EXPANDED under Obama, but let's blame the republicans.

Cloward-Piven. Look it up and tell me Obama isn't following this strategy.

Give the masses bread and circuses. They will never ask what is in the bread or who is dying in the circus.

Oh come on, how many wars did Bush start and end? I am still pissed at Obama for not ending Bush's wars sooner but obviously there is more to it than I know. Listen I don't think Democrats are the answer, until we stop the corporate and monetary influence on politics we are screwed. However the republicans obviously want to capitalize on the situation to the nth degree regardless of the damage to the country and more importantly to the people that power it. Money is not speech and profit is not people.

Sadly over the years the checks and balances have been subverted. Most power lies in the executive branch now due to war powers acts and the ability to enact executive order. The Supreme Court has no teeth and we all know congress is a joke.

Imagine if we did away with congress and went to a truly democratic system where the people vote on the issues. Presidents couldn't just attack countries because real time votes could happen. We can do it in this digital age. Lobbyists would have to lobby the people instead of politicians, it would stop so much self serving corruption from both sides of the aisle.
edit on Fri November 29th, 2013 by damwel because: (no reason given)

It may be a small point, but when you say:


Money is not speech

you find yourself in disagreement with the US Supreme Court. From Citizens United v. FEC:

Holding: Political spending is a form of protected speech under the First Amendment, and the government may not keep corporations or unions from spending money to support or denounce individual candidates in elections. While corporations or unions may not give money directly to campaigns, they may seek to persuade the voting public through other means, including ads, especially where these ads were not broadcast. (Emphasis added)


Sadly like you said mostly of the young and healthy are unemployed or underemployed this days, so that is why insurance companies dropped the already covered working class in order to raise premiums to get their backs cover when the younger group do not sign in.


We'll yeah, uh duh. I am well aware of that, in fact it is my point. Regardless of the SCOTUS ruling, it's wrong and it will lead to corporate control of the government. It's the corruption of the golden rule, it isn't he who has the gold makes the rules. Well not in the world I want to make.

The idea of incorporation was to free the entrepreneur from the fear of losing everything he owned if his business went bellyup. It shouldn't mean that he who has the money makes the rules. Do you really have that much money that you are ok with that?


I really hope what you say isn't true, Marg. If that is really the case then the ACA is really off and I will still blame the heritage foundation for it. Call me a socialist if you will but I think healthcare should be within the reach of every American and that is what I believe is the goal of the ACA. It isn't going to solve every case but it has to be better than the existing system which had insurance companies screwing everyone in the name of the almighty dollar.


That ruling was a complete sham, and one of the biggest reasons our political system is in the poor shape it is in, in my opinion. The big companies propped up the two parties with so much money, that no one can compete from any other party, or as an independent.
edit on Sat, 30 Nov 2013 00:10:56 -0600 by TKDRL because: (no reason given)

posted on Nov, 30 2013 @ 08:35 PM
link
I can understand a large system having some teething problems but how can it fail so miserably ? Saying that it was made by monkeys is insulting monkeys. I know darn well that bush would have been crucified for this failure..

Obama = Afghanistan + Libya + 12 undisclosed African countries + support to the muslim brotherhood in Egypt and Syria + pushing us closer to including Pakistan + escalated hostile relations with China + attempting to rekindle the cold war with Russia (and that's just above board, the Gods only know what this administration is hiding)

The left/right argument is about the votes.

Republicans want to spend tax payer money building the greatest army and ensuring we are never invaded. They do not pretend there are benevolent millionaires, they just agree that somebody has to make all the money the government is spending.

Do some research. Bush or Obama, which one's net worth increased the most during their first five years in office. The answer to that should get your eyes opened a little more.

Obama didn't end any of the wars. He claimed credit for the drawdown in Iraq that was scheduled under Bush. Wonder why Bush wasn't blamed for that?

Obama claimed to kill Bin Laden yet provided not one shred of proof." Have faith" is the motto of the Holy Mother Church and the Obama administration. At least the church only expects 10% of our income...............