Evergreen International to shut down - fate of 747 tanker unknown

posted on Nov, 21 2013 @ 06:15 PM
link
Evergreen International Airlines recently announced it is to shut down - the main reason given is the drop in military cargo business. 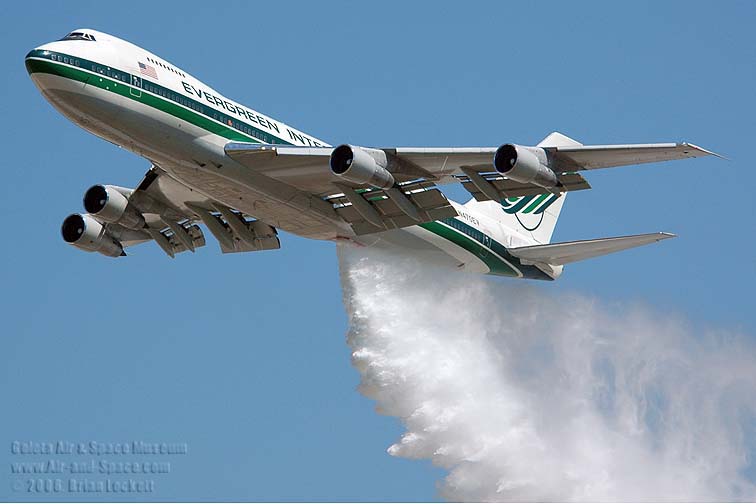 I haven't read any info on the fate of this unique aircraft - however it is on the FAA register here so any official changes to its ownership can be followed.

The company is often linked to the CIA due to having purchased a lot of the former Air America fleet and having merged with Intermountain Airlines from Pacific Corporation (a CIA front company).


Yes I started one in the chemtrail/geoengineering forum and it was removed. This one has more about het a/c and company, less about the conspiracies, and hopefully meets the requirements better..

posted on Nov, 22 2013 @ 11:06 AM
link
Evergreen International was in the press for being examined for financial fraud last March in the way that they were moving money around between their for-profit business and their non-profit museum (primary feature is the Spruce Goose). From what I understand personally, there was most likely very good reason for such an investigation as there were definitely some curious things going on. Heard all about it from a close family friend who worked there. Apparently, the company had replaced their prior CFO with an accountant from Enron and engaged in all sorts of very curious antics such as reporting income in Tunisia without actually having a business set up in Tunisia (it was set up after the fact). Odds are that Evergreen International is in hot waters. www.oregonlive.com...

Heard all about that in a strange offer of assisting me in getting a job there after I found my tape so this little company was almost part of my messy, messy world. I'm glad to say that I had the common sense to decline the offer as any scandal erupting, which I deemed likely, would've simply taken me down with it. I didn't even know about the CIA affiliation at the time. I don't regularly visit chemtrail threads so in a way, it's almost a pity that I didn't take it as I could've possibly found some answers for you all on the subject. And for the record, I don't talk to that family friend anymore. Zero trust there now.

PS. They aren't shutting down--not yet at least as per your link:

While Evergreen generally does not comment on market rumor or conjecture, rumors that a decision has been made to cease operations at this time are false.

farmer77
Yikes I almost took a job with them in McMinnville ....... glad i didnt.

lol, yeah, I'm glad that you didn't either. I'm an accountant so I would've definitely been impacted by that Oregon DoJ investigation but all I needed to hear were the words "used to work for Enron" to get me to steer clear of that and fast. It was the weirdest job offer ever as the family friend kept drinking wine throughout the couple hour long phone conversation and started spilling so much financial dirty laundry that it was hilarious to consider that this person offered to get me a job there as an accountant. Hopefully, the Oregon DoJ catches all of it.

WhiteAlice
PS. They aren't shutting down--not yet at least as per your link:

Southern Air Transport was another CIA front, like Evergreen. Evergreen will probably do the same thing they did.

In 1947, Southern Air Transport was founded to fly cargo to the Bahamas from Miami. The CIA bought them in 1960. In 1998 they filed for bankruptcy after the CIA released a report that they were running drugs. In 1999 Southern Air "bought" their assets and began operations in November of that year.
edit on 11/22/2013 by Zaphod58 because: (no reason given)


I don't know how much of a front Evergreen International actually is. The family friend that works for them definitely made it sound like a privately held operation and never once mentioned the CIA or any defense or even government contracts. However, that is pretty meaningless given the context of that call. It came several days after I contacted my dad about a positively demonic tape (with the name of an associate dean of a university on it, btw) that I found in my mother's house that had been used on ME long ago. This family "friend" practically called me a loser for being concerned about my past, offered me a job and then, offered me a part-time job while I "recovered" so I was moving forward instead of backward when I said I was in no mental shape for it. When I finally blew up at her and told her why I was having such bad issues, she got off the phone and I never heard from her again. I cannot even begin to describe what kind of mind **** it was when I actually looked into this company, given that context.

Now people can write me off as just another loon or they can consider for a moment that I am absolutely telling the truth. I don't know why I got that call or was offered that job. I don't even know whether or not she could've done what she said. All I know is what wine loosened from her lips about their financial activities. Given the context, it could be apparent why there was a decided lack of specific information in that call though so I have no comment. If anything, I'd very much prefer that they were not a CIA front as that'd be infinitely more personally comfortable. As far as the family friend goes, I would never imagine her working for the CIA. She's more of a free spirited hippy type with a tinge of odd conservatism so major disconnect there.


If they're not, then they're damn good at making it look like they are. One of the companies that they merged with then they first started was a CIA company. They may not be directly owned by the CIA, but they definitely are a contractor for them. The evidence is there if you look in the right places, and it's really not hard to find. Flights into areas right before something happened there, things like that.


If they're not, then they're damn good at making it look like they are. One of the companies that they merged with then they first started was a CIA company. They may not be directly owned by the CIA, but they definitely are a contractor for them. The evidence is there if you look in the right places, and it's really not hard to find. Flights into areas right before something happened there, things like that.


Yeah there are alot of redneck operations out there which run off CIA type money but aren't truly fronts. Just good ole boys makin money off their good ole boy friends.


With Evergreen though, one of the companies that they merged with to create Evergreen was a known CIA started company. So either they kept those ties (which makes a ton of sense), or it's a sheer coincidence that they do so much CIA work.


Yep. That's what I discovered post-phone call because I was so outraged and disturbed by the phone call. The link between Evergreen International and the CIA is pretty darn strong. It blew my already blown mind. Very hard to stay pragmatic sometimes. I do not speak to that friend or my own father anymore as a result.

If it is a CIA front, I do know that they are filing state and federal taxes as there was an issue with income being funneled through Tunisia and a taxid being used. So, if they are a CIA front, then well, even a CIA front does some pretty sketchy things with their taxes. lol The results of the DoJ investigation aren't out yet so I'll throw out a number per that phone call--between $50-75 million. That was the number given to me when asked if it was "material".

PS. They aren't shutting down--not yet at least as per your link:

"While Evergreen generally does not comment on market rumor or conjecture, rumors that a decision has been made to cease operations at this time are false. "

You are right - it is the Air Cargo operations that are reportedly being shut down - this leaves a number of other operations still going, and means it is perfectly true that they are not "ceasing operations".

I had meant to include this link in the original but forgot - mea culpa.

IMO there's a lot of "management speak" in the Evergreen release - my take on a couple:

"Evergreen remains committed to continuing to address the current business environment with its customers." = "We're trying to get new contracts, but he economy sucks so customers are demanding lower prices and better service.."

It was there in Oct 2012 in what looks like stages of dismantle (missing engines and flap sections.

A United Arab Emirates company is suing Evergreen for $5.4 million, claiming the McMinnville-based airline never paid it for air cargo missions in Afghanistan.

Together, these and other suits filed against Evergreen reveal an airline in a tailspin, scrambling for cash and often failing to show up in court to defend itself as its 83-year-old leader fights to regain control. Smith has averted disaster many times in more than five decades of management, but people close to Evergreen believe that this time his privately held corporate group is crashing.

Looks like a common sort of corporate screw up.


Looks like they couldn't pay the lease payments on their engines. There's a couple of old engines on the inner pylons so that the plane won't fall back on to it's tail.

1989 I worked for Evergreen on a contract job. We converted a 747 to a cargo aircraft and did a D-check at the same time. At least their checks cleared then.


Maybe they can give all their debtors free passes to Evergreen's Wings and Waves water park as compensation.