Have any Calculation How Big Ison Core is? 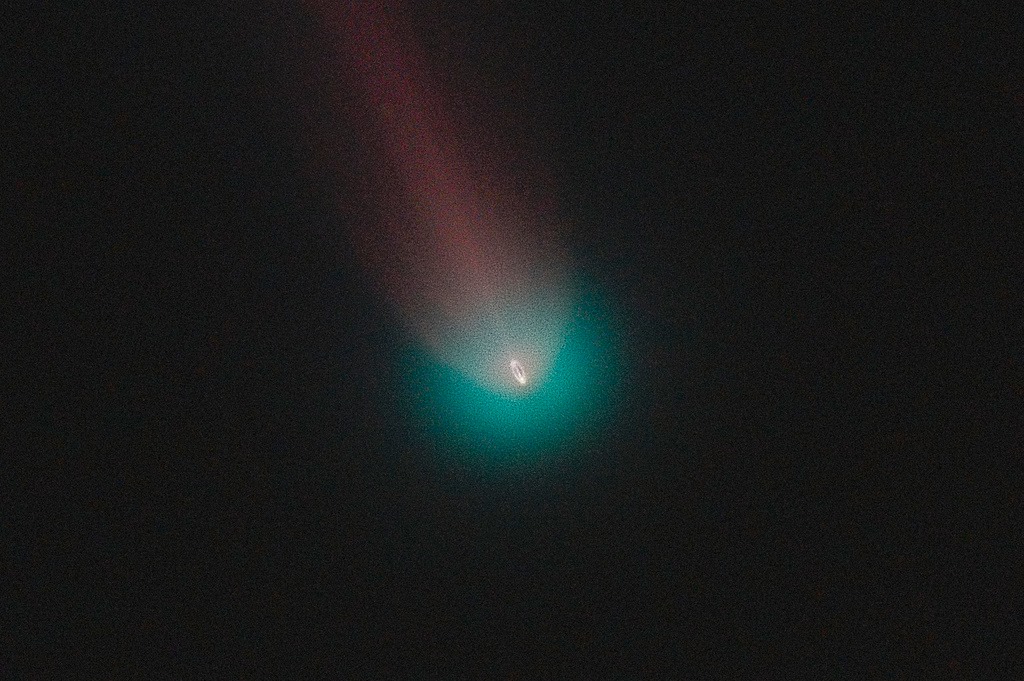 do you know Ison Outer Coma is now Aproximetly 62.000 Km!, so how Big the core is?
i find another great picture here, 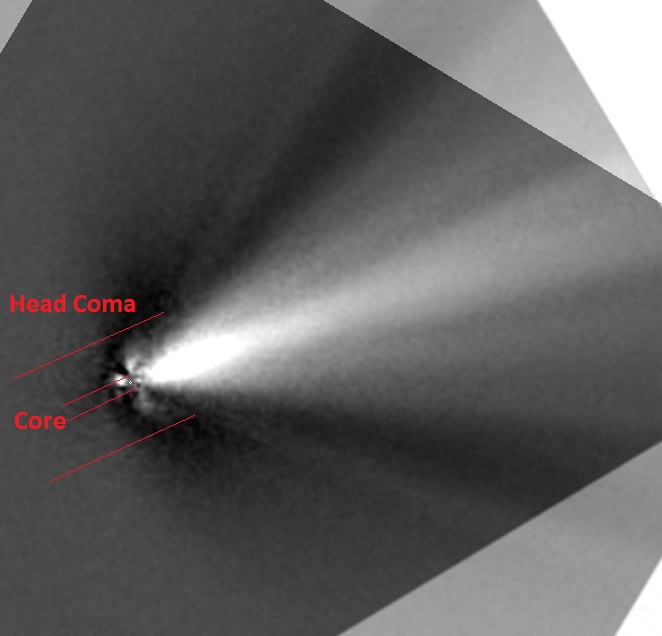 So from the data above if the Coma 62.000 Km how big is the core?
hundreds? thousands?..i think we have Gigantic comet ..meanwhile comet halley just have less than 8 Km wide core..
lets talk about this seriously please, i am not the expert,but willing to know the truth..


But scientists think ISON is big enough to deal with this issue; most estimates place the comet's core between 0.12 miles and 1.2 miles across (0.2 to 2 km).

Keep up the awesome work Cheesy.


But scientists think ISON is big enough to deal with this issue; most estimates place the comet's core between 0.12 miles and 1.2 miles across (0.2 to 2 km).

Keep up the awesome work Cheesy.

I have no idea where they got their info, but I am sure someone in the field will find out its actual size soon enough.

cheesy
Tqx All for Repllying..but i still dont get it, if the core only 2 or 5 Km then how can this Ison Create 16 Million Km tail..? and 62.000 Km coma? well i already googling but dont get it..and also in the youtube i find Ison Coma now growing to 80.000 Km

There is nothing unusual about this. These all say 3 miles, I can't find a single source for 1.2 or less than 1.

posted on Nov, 21 2013 @ 02:39 AM
link
Cheesy remember that a "few miles" is the size of a mountain! thats A LOT of ice and junk to be baked off it also remember that as stuff leaks to the surface due to the heat once it gets to the edge it gets much much hotter and expands and falls into a vacuum of space expands much much more.

Just a few kilos of ice (and we are talking about a total mass of millions) once expanded will cover a great distance and once lit up by the suns rays, well you get the idea

EDIT: also all estimates are really guesstimates. 50 million kg's a day is unlikly but a few miles does mean million upon millions of kg's mass, probably billions, trillions even.


cheesy
Tqx All for Repllying..but i still dont get it, if the core only 2 or 5 Km then how can this Ison Create 16 Million Km tail..? and 62.000 Km coma? well i already googling but dont get it..and also in the youtube i find Ison Coma now growing to 80.000 Km

There is nothing unusual about this. These all say 3 miles, I can't find a single source for 1.2 or less than 1.

sory i ask once again sir,
in the article you refrence..


if you said only 1 or 2 Km then how can Ison get So so so many Dust, its Every day sir..can you imagine?


It is thought that the nucleus is around 3 miles (5Km) in diameter.

The reason the coma/tail are so big is all that sublimation of the ice has essentially formed an atmosphere around the comet, but the gravity on the comet is so weak, it can extend out for quite some considerable distance.

It is also too weak to hold on to it, so the dust and gas escapes forming the tail.

There are actually two tails on a comet (usually), the plasma tail is the gases, ionised by UV photons from the sun, and then the solar wind carries them away. The second tail is the dust tail, which can move in a slightly different direction to the plasma tail.

With no real forces in space, apart from the solar wind, these can extend for several hundreds of thousands of miles.

The "wings" on ISON btw, are likely large parts of it breaking off as it approaches the sun, hopefully it isn't a sign of a total break up.


Ison is about 5km large and is up to 7 TRILLION pounds. So 2 million of 7 TRILLION isn't that much. That was also at that particular time, because it's close to the sun. That is not what it will lose every day.

You press the nozzle and you get a huge spray that goes on and on.

But the can is only very small by comparison.

Probably not a good comparison but should give an idea of how the size difference works.

Plus, I have no idea

winofiend
I would think of a can of spray paint.

You press the nozzle and you get a huge spray that goes on and on.

But the can is only very small by comparison.

Probably not a good comparison but should give an idea of how the size difference works.

Plus, I have no idea

Don't forget that bouncy thing inside the can of spray paint that rattles when you shake it.

Think of these analogies:

Light a piece of incense. Consider how small that incense is, yet how much smoke do you see rising from it?

A cigarette is small. Yet if we light it off and someone smokes in a closed room, note how much smoke is in the room.

Get a pot of water (small pot that holds about a liter). Boil it. Note the steam (water in gas form) and how much of that is rising in the air.

Solid objects are compact and dense. Gases are highly diffused and not very dense at all (it's why you can walk though that smoke, but not the log).

Gases are able to cover a very large area, even if the object they come from is small.

posted on Nov, 21 2013 @ 07:43 AM
link
This source is a bit dated but it's better than MSM guesswork or reporters reporting on each other.

While the water and dust production rates are relatively uncertain because of the comet's faintness, they can be used to estimate the size of ISON's icy body. Comparing the amount of gas needed for a normal comet to blow off dust at the rate observed for ISON, the scientists estimate that the nucleus is roughly 3 miles (5 km) across, a typical size for a comet. This assumes that only the fraction of the surface most directly exposed to the sun, about 10 percent of the total, is actively producing jets.

The article there also explains the outgassing and loss of mass a lot better. Hope that helps!

posted on Nov, 21 2013 @ 01:18 PM
link
Less than 34 km in diameter. Probably a lot less, but 34 km is the hard limit since Hubble would have been able to resolve it in the last image it took of ISON on November 2nd if it were larger than that.

posted on Nov, 21 2013 @ 01:35 PM
link
A while back the information was saying almost everywhere reputable that the nucleus was between .2 and 2 KM. Now most of those sites have upped the size considerably. I wonder how they can change the information so quickly. I noticed things change within hours of new research evidence coming out that shows it differently. I guess it is better than having evidence of their mistakes hanging around. Some stuff I backed up on paper so I could check how much things change. I thought I was reading things wrong at first till I compared some of my printed articles against the revised articles. I gave up, it is going on everywhere, there is no reason to even track it. what is real one day is not real a month later and there is no proof unless you print it.

Coffee is good for you now and most all evidence of it ever being bad is gone from the internet. Think about it, that much history changed in less than three years.

but i could not find that article...but cam upon this article which states ISON is between 3-5 miles big

the web article is brief but brings a lot of visual help for your brain to assimilate....


if nothing else ISON should be connected with the Final Pope....and what happens to ISON may well precede the events that will happen to Pope Francis....
? what will the meaning be if ISON breaks up like Shoemaker-Levy did

? what if ISON completely dissolves on this first trip to the inner solar system

~ there might be other eventual outcomes for ISON...But will the demise of ISON be a Forerunner to the Popes reign and potential death by arrows & bullets under a cross? ~ just can't see how that would come about, but there are stars & constellations up there that were made to 'tell' the time & seasons
edit on 21-11-2013 by St Udio because: (no reason given)