Mystery arrows in the desert

Not exactly a base, but Groom Lake investigator and occasional ATS Ask Me Anything participant, plus trusty videographer Matt, did a piece on mysterious arrows in the desert. Apparently they were used in air mail delivery.

In the article there is a link to where to find the arrows. 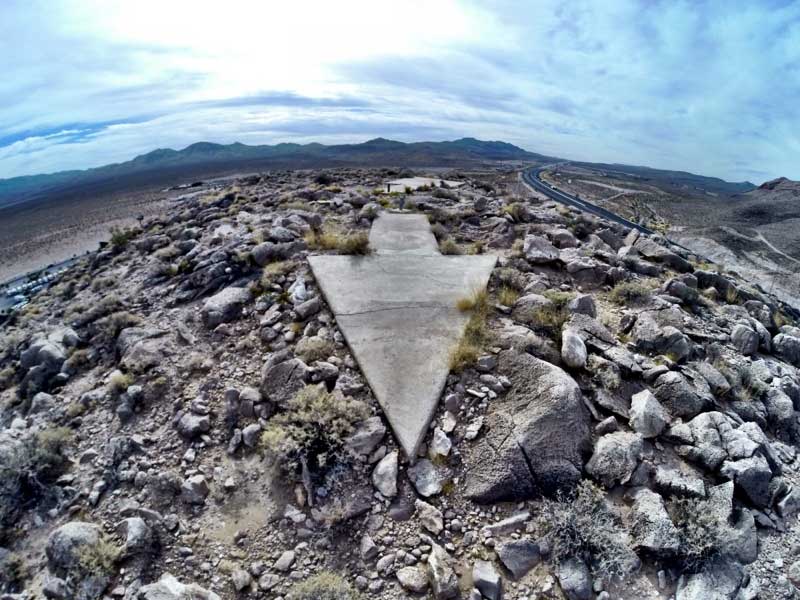 wewww..in the article this not only one arrow but many of them..its odd, do you know where this arrow pointing? maybe there an image from above?
Tq for the morning Mystery..SnF


That is a cool story. If I had stumbled upon on, I would have no clue. Clearly man made and clearly modern. But past that?


There is a link in the article which goes to a google map and satellite page, but no coordinates. But we can figure them out in short order.


That is a cool story. If I had stumbled upon on, I would have no clue. Clearly man made and clearly modern. But past that?

and the purpose clearly for the above sight only..

In the years following World War I, in response to pilots of the fledgling airmail service getting lost, and often crashing, the government built a network of giant concrete arrows and beacons that would lead the pilots safely along their route.


well now we know the "purpose" they say,but..


There are other more weathered ground patterns in the area 51 area such as this less obvious and overgrown fish like glyph.

Sorry for some reason the image has uploaded at a vastly reduced resolution that is no good for viewing so here are the google earth coordinates and other details.

Nothing unusual but very strange and maybe these ground glyphs served a similar purpose for aeriel orientation during test flights.


There is a tendency when starting at Google Earth too much to become subject to pareidolia. Or as Freud would say, "Sometimes a cigar is just a cigar." Pareidolia is often mentioned by "skeptics" when discussing Virgin Mary sightings.

Having looked at a lot of interesting stuff on Google Earth, then going there in person, you are often disappointed. Some things, like those emergency runways around the NTTR, can't even be seen on the ground. When you see a barren spot of ground, then get there in person, it doesn't appear to have been subject to any "trauma", oh, like a plane crash. I don't recall the proper geological terminology, but when there is rock just beneath the soil, i.e. a potential rock outcropping if it wasn't for a bit of dirt, the dirt can't support much in the way of plant life. The geologists also talk about some dirt actually being "weathered rock", which doesn't support much plant life either. So there are lots of natural explanations for patterns in the earth.


Well, to me they seem to be pointing exactly to one place: north-east. At least the few ten i took a closer look at.

posted on Nov, 23 2013 @ 12:43 AM
link
Yup air navigation arrows from the days before radar and GPS. There used to be towers topped with lighted beacons over the arrows. Heres an interesting link discribing the system. wchsutah.org...

ThePeaceMaker
Just a question .. When these arrows were made, couldn't pilots use a compass and a map ? What if these arrows couldn't be seen due to bad visibility .. Just a thought

Well we know they didn't have a pressurized cabin based on the photo. So they were certainly flying under 10kft. I think they could see the beacons in most cases. Their biggest problem was probably not being able to fly over bad weather.

To navigate with a compass, you need to know where you are as well as which way to go. I could see this being difficult once you left the airport since without these towers, all you would have are landmarks to indicate where you are. Get off course a little bit, and you may not see the landmark. Even today, there are still pilots that land at the wrong airport. There was one just a few days ago:
747 lands at wrong airport


Thanks gariac I guess I didn't think about flying heights during them times. I always thought that a flight had a pre planned route, like they get a map and plan way points prior to taking off. Then once you got your way points you just use compass bearings at each way point. I guess I don't think in depth about things sometimes


Thanks gariac I guess I didn't think about flying heights during them times. I always thought that a flight had a pre planned route, like they get a map and plan way points prior to taking off. Then once you got your way points you just use compass bearings at each way point. I guess I don't think in depth about things sometimes


Well don't get me wrong here. I mean you can just fly VFR (visual flight rules) with no flight following and do whatever you want. Helicopter flights are generally VFR. But it may not be a good plan for cross country flight.

Most parts of the country use the frequency 123.4 for helicopter chit chat. Since they can be anywhere and everywhere, collisions are a potential problem. But not following flight routes means if you go down, you are significantly harder to find. Helicopters these days often use a satellite tracking system. The FAA doesn't get the feed as far as I know, but you have a responsible party on the ground that keeps track of your flight. There are a lot of holes in FAA radar. If you listen to Nellis control, they lose radar contact with light aircraft flying along route 95 in certain areas.

Above a certain altitude, instrument flight is required.

roncoallstar
I created a thread about something similar awhile ago. Check it out.

Most of what you found are training ranges. I don't know about the triangle, but the star pattern is typical of air defenses. A guru could look at them and tell you what country based on the pattern.

This blogger would probably give you a definitive answer to what you found, but you might want to see if he has already written about the area.
IMINT and analysis

At one time he was a secret blogger, but is now out in the open. He is a contributor to Janes, so I would say he probably knows his stuff.