KATU Photojournalist Mike Warner did while flying in Jet Ranger 2 and he shot this video. He said he and the helicopter pilot were over Interstate 205 at the Clackamas Town Center around 6:30 a.m. and spotted the odd sight while looking east.

Most probably space junk but hey. 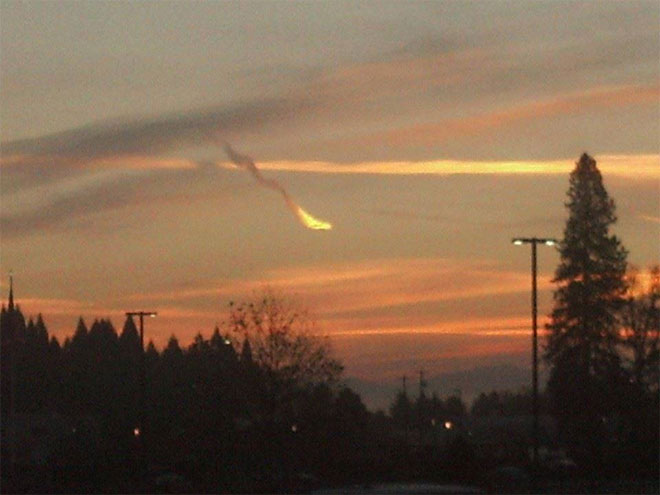 ...then it is very obviously an aircraft contrail, backlit by the sun.

The telling point would be how fast the object moved.
A "fireball" would zip across the sky in a few seconds, while an aircraft would obviously move at the more leisurely pace of an aircraft.

Edit - now that I've got the video to load (the darker one with the greenish hue), that looks absolutely NOTHING like the photos polastered elsewhere on the page, but still looks like an aircraft contrail.

edit on pmWednesdayfpm1 by alfa1 because: (no reason given)

posted on Nov, 20 2013 @ 07:52 PM
link
I agree - a decaying contrail being illuminated by the sun. I'm surprised this gained attention to be honest: they're a common sight


Obviously the OP isn't to blame for this heading. 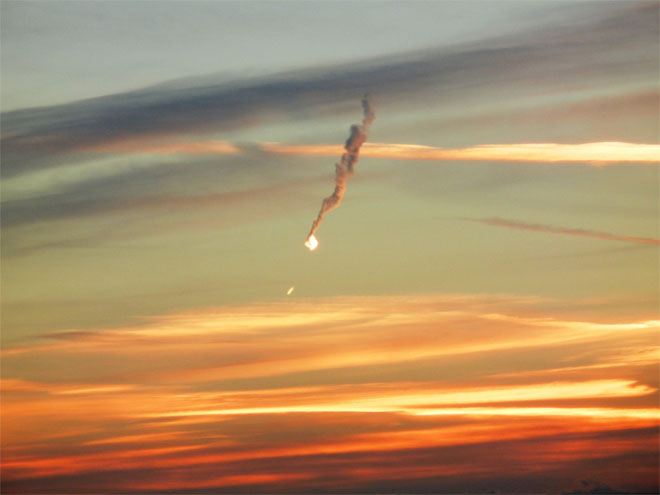 
I was thinking a chemical dump and that shiny bright streak is the culprit fleeing the scene....

If not a dump, then meteor.

A lot of "boom" reports...
edit on 20-11-2013 by AbleEndangered because: added reply format and additions


Well I thought contrail to when I first saw it but boom reports point to meteor or space junk to me.


I was thinking a chemical dump and that shiny bright streak is the culprit fleeing the scene....

If not a dump, then meteor.

A lot of "boom" reports...
edit on 20-11-2013 by AbleEndangered because: added reply format and additions


a boom? great then its not a contrail story anymore..


Oh no, I meant Boom reports around the country or USA. I didn't see a mention of boom with this one yet or hear a boom today.

But other days, I have heard some interesting booms...
edit on 20-11-2013 by AbleEndangered because: addition

Would you all Please stop Hogging the Show! Just once I want to say Hell Ya!


of course it's not a contrail,


Yet another sunlit contrail causing confusion.

Between 1400 and 1500 GMT you can see the following flight listed taking off from Portland International and heading out East using the waypoints and climbing out to get onto upper air route J15. As they pass Mount Hood and further on they will be passing through 26,000 feet and producing contrails. Perspective makes the contrail appear to go down towards the horizon. You can also see the north-south contrails sunlit. You can also see the flights going south that would produced the other sunlit contrails.

Also consider that all the aircraft in that region (noted on Flight Radar) would be reporting it if it was burning debris, meteorite or whatever.

So all you have here is a contrail from the J15 upper air route being filmed by a cameraman onboard the helicopter. Shortly before full sunrise people on the ground take images of the remains of the sunlit contrail. The easterly part of the contrail is lit with the rest in shadow. I can fully understand why people are confused by perspective and sunlit contrails.
edit on 20/11/2013 by tommyjo because: additional info added


Hi Cheesy! too
what do you mean? have any pict?


That is no contrail. That's obviously a large meteorite.

By the way, there is some recent research to suggest that the Chelyabinsk asteroid which became the Chelyabinsk meteorite may belong to a family of other rocks headed in our general direction.

I would not be surprised if we have a few other events of this nature.

Most people don't realize that the solar system is actually a bit like a pool table when it comes to objects the size of the Chelyabinsk asteroid.

Until recently the amount of people who were tasked with keeping track of near earth objects was about the size of the crew at your local McDonalds (though with much higher IQs).

So why isn't this thread in the Space or Science forums. Has nothing to do with UFOs or Aliens to be honest.
edit on 20-11-2013 by JadeStar because: (no reason given)

That is no contrail. That's obviously a large meteorite.


Then where are all the reports from aircrew in the area? Look at Portland International with arrivals and departures. Do you not think it strange that aircrew are not reporting such an event? Where are all the webcam and CCTV footage facing east from the populated areas? The image you posted is simply showing the sunlit lit portion of the contrail.

The ground photos are after the helicopter crew video. The cameraman onboard has the time as around 0630 to 0700 - obviously before sunrise.

The sunlit images are after this period. For example 0715

Photo courtesy Karl Sutton. "Saw this at about 7:15 this morning when driving away from the airport... I assumed it was just a contrail that happened to be partially lit up by the sunrise since the east end of it was much brighter than the rest."

Experts from the Cascadia Meteorite Laboratory at Portland State University say it could have been a contrail that looked like a fireball because of a trick of light.

In my opinion people are just getting excited over a sunlit contrail. The video shows the contrail pre-sunrise with the remnants of that contrail appearing strange after being sunlit.

posted on Nov, 23 2013 @ 04:44 AM
link
The time-lapse explains all. Yet another contrail causing confusion and especially when sunlit. The helicopter footage is now confirmed as being from 0624 PST. The ground photographs showing a 'fireball' are from shortly before full sunrise at 0717. Some from 0710 and 0715.

The time-lapse match up.