Viking Apocalypse End of the World Party for February 22, 2014

We could wear Viking hats ... you know, the helmets with the horns on them.
OpinionatedB suggested making them out of TIN FOIL so we keep with an ATS theme.
Some of you all who live near each other could get together ...
Or you can celebrate on your own with family and friends ...

Serve Viking food -
Viking Food
Beef, mutton, lamb, goat and pork ... any kind of game meat like deer or elk or bear, boar, pigeon, goose, and squirrel. Nuts and berries ... North Atlantic fish like Cod and shrimp .. HEAVY bread .. lots of veggies and spices which you can read about at the link.

Alcoholic drinks were heartily consumed, this being one way to preserve carbohydrate calories for winter consumption, and consisted usually of ale. Hops and bog myrtle were used to flavor ale.

Mead was also consumed: honey was cultivated in southern Scandinavia, and imported by those in regions where bees cannot thrive. A drink which was both very alcoholic and which is described as being sweet was bjórr. Fruit wines were occasionally made, being used for sacramental purposes late in the period, and grape wine imported from the Rhine region by the wealthy.

I can't drink alcoholic beverages anymore, but I can eat some of what is listed.
And I can't get out to be with people ... especially in cold and flu season.
(My autoimmune meds and white blood cell counts keep me away from crowds)
But I plan on having a FAMILY Viking Apocalypse End of the World dinner party with my family.

And don't worry about not being able to drink... I'll drink your share


Sorry to be a party pooper but I am still wore out from the Mayan Apocalypse. If we have one in 2015, I should be ready. Give my regards to all. 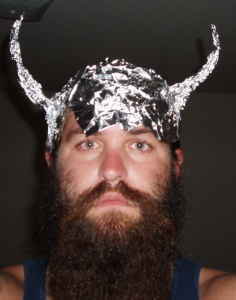 posted on Nov, 18 2013 @ 09:10 AM
link
I'm down for some mead, a friend of mine brews it. Strong stuff, tastes very similar to champagne. Six of those and you're ready to plunder and pillage!

Tylerdurden1
That sounds like fun! Can I drink my ale out of my viking helmet?


OF COURSE! Drink your ale out of your helmet. All the more Viking-er of you.
(not a word, but it's fun to say!!)

And I'd say tin foil Viking helmets are the best ... all things considered.


Sorry to be a party pooper but I am still wore out from the Mayan Apocalypse. If we have one in 2015, I should be ready. Give my regards to all.


YES BUT ... the 2012 Mayan thing didn't include eating MUTON and drinking Ale.
This is a whole lot more fun.


I love merriment and debauchery!

So pretty much I just keep doing what I have been doing?


WOOHOO for the Viking Apocalypse Party!

Ours will be the family kind of party, and a non-alcoholic one at that as well.. (although I see that others will be drinking my share as well!)

My stepson is expecting his first child (they say it will be a girl) on January 25th (my biological son's Birthday!) So we may be on our first visit to see our new grand baby at that time... don't know yet but we are planning the trip! So it is quite possible we will be sharing pics of our baby ats'er in her little viking tin foil helmet with all of you!

Anyway, regardless of where we are... its viking Apocalypse party for the neno and opinionated household! woohoo!


WOOHOO for the Viking Apocalypse Party!

Ours will be the family kind of party, and a non-alcoholic one at that as well.. (although I see that others will be drinking my share as well!)

AHEM! Negotiations are in order....

What I REALLY want to know is... if Odin is killed by Fenrir, what happens to Valhalla? Will there be nowhere for me to go when Ragnarok is over?


My husband would like you to watch the very first episode of the History Channel drama series "Vikings". Then he wants you to get back with him on whether or not you are brave enough to want to be entertained by dancing Valkyries....

Although he mentions the amount of mead you partake in may effect what you think concerning that!

But heck... you can have dancing valkyries if you want... it IS a party after all!

Just got an invite, my Dad's ancestors came from Scandinavia to Ireland to England

Get out the mead, pour me a horn and send the women this way.

Now where did I put that sodding longboat ?


Welcome to the party!

Of course we will burn your body if you don't survive! This is what friends are for!

You should invite all your friends too!

We can make this a blowout... I think there can be nothing more fun than a Viking Apocalypse!

posted on Nov, 20 2013 @ 11:45 PM
link
A gent I work with actually IS a Viking... or the modern equivalent, I reckon. From Denmark. He allows that dancing Valkyries would be inconvenient, since they dance only in the sky and out of arm's reach... and only come to Earth to retrieve the souls of slain warriors, which would be a real downer during a party. I'd expect a few broken heads (or heads that at least FEEL broken), but actual deaths would harsh my mellow.

On the positive side, if any party-goers are hapless enough to get themselves slain, and lucky enough to be retrieved by the Valkyries, then they get to watch them dance and have them serve their meade and whatnot in Valhalla! The down side of that is that the warriors in question have to fight all day long and kill each other off, only to be revived for the nights festivities (valkyries included at no extra charge) in the Great Hall every evening after the warring is over and the partying starts. It ain't bad enough to get yerself all slain and corpsified just once - in Valhalla it happens over and over again, on a daily basis.

My Viking buddy also says that it ain't a real Viking party without some kind of bread that I can not pronounce (or spell on an American keyboard - it has one of those odd "o"'s with a diagonal slash through it in it. I can't make that sound, either... it would void the warranty on my vocal chords if I tried... when he did it, it kinda sounded like he was swallowing his tongue), but which is composed of whole-grain rye and very dense... he also mentions that pickled herring is a must. Personally, I think pickled herring may be what ends the world, but he swears by it.

I'll see about picking his brains (not in a gross, zombie kinda way though) for more ideas.


My husband would like you to watch the very first episode of the History Channel drama series "Vikings". Then he wants you to get back with him on whether or not you are brave enough to want to be entertained by dancing Valkyries....

Although he mentions the amount of mead you partake in may effect what you think concerning that!

But heck... you can have dancing valkyries if you want... it IS a party after all!


with 13 ex - wives scattered around the world to deal with .. dancing valkyries would be a reprieve ...


13 Exes, eh? 13 is a very unlucky and inauspicious number. I think you should have another go at it, just to even things out. Maybe try tying the knot with one of the Valkyries at the Viking Apocalypse shindig. What's the worst that could happen? Your exes would then not be limited to "around the WORLD", since Valkyries are other-worldly?

BTW - when a wife who is a Valkyrie feeds you pickled herring, you EAT it!

And smile through the pain....