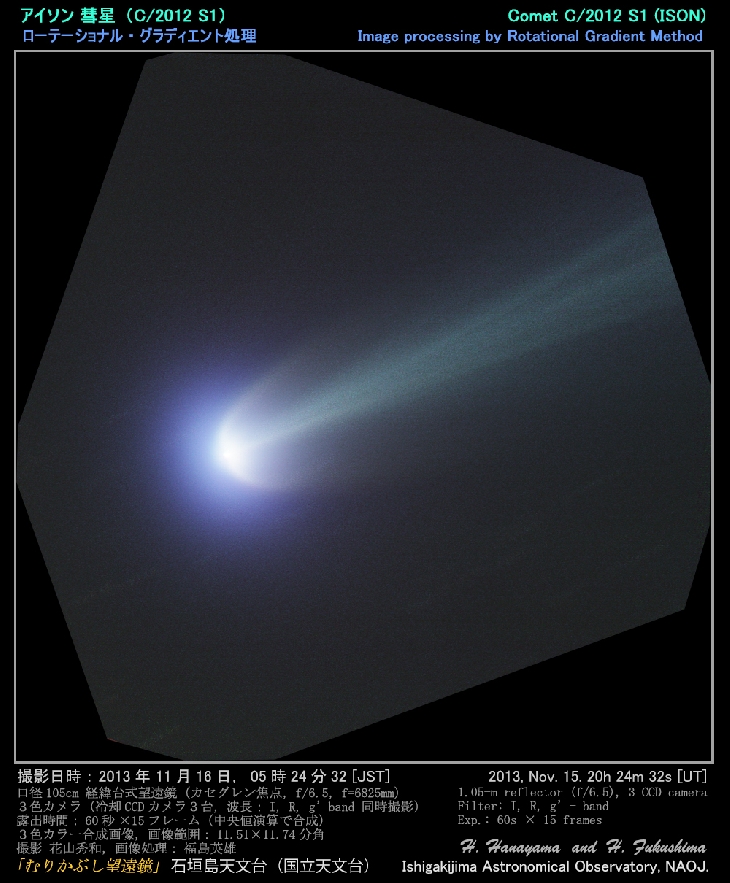 COMET C/2012 S1 (ISON) update November 16, 2013 from CBET 3715
H. Boehnhardt, C. Tubiana, N. Oklay, and J. B. Vincent, Max Planck Institute for Solar System Research, Katlenburg-Lindau; and U. Hopp, C. Ries, M. Schmidt, A. Riffeser, and C. Goessl, Astronomical Institute, Ludwig Maximilian University, Munich, report the detection of coma wings in Laplace-filter-processed CCD exposures of comet C/2012 S1 obtained with the 0.4-m telescope of the Mt. Wendelstein Observatory on Nov. 14.16-14.21 and 16.16-16.21 UT. The arclet-like wings appeared in opposite direction from the nucleus at position angles 15 and 195 deg on Nov. 14 and at p.a. 25 and 205 deg on Nov. 16. The coma wings extended straight from the nucleus for about 4700 km on Nov. 14 and 13500 km on Nov. 16 on either side of the extended radius vector and continued in streamers of the plasma tail. No coma wings were found in similar exposures obtained on Nov. 13. The coma wings suggest the presence of two or more sub-nuclei with individual expanding atmospheres in the overall cometary coma and may indicate recent nucleus splitting in the comet.

when i Read and search for the truth i find the answer according to "NASA Comet ISON Observing Campaign"..


One of our primary functions as coordinators of the Comet ISON Observing Campaign is to encourage and foster data sharing and discussion regarding comet C/2012 S1 (ISON). This brief blog post is to do just that. 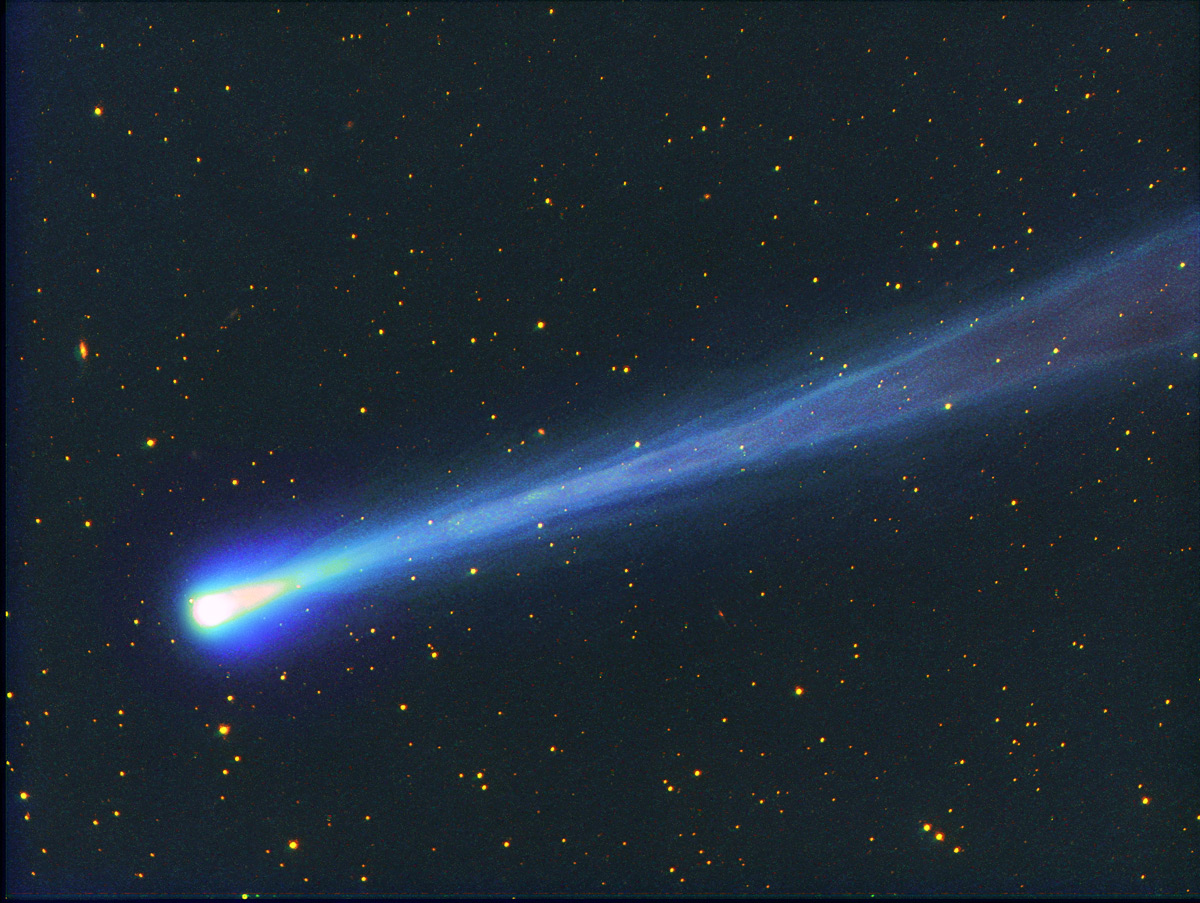 There is some discussion over a report that has been made in which the authors describe “ coma wings [that] suggest the presence of two or more sub-nuclei” in Laplacian-filtered comet ISON images. This is a report that has been made by some respected scientists, and thus the CIOC team are definitely taking the report seriously. Indeed, as we have commented, comet ISON’s recent dramatic outburst could absolutely be the result of fragmentation of its nucleus. However, it could equally likely be the result of the expect increase in activity as it continues to approach the Sun. Both of these are possibilities that we have outlined out on this site.

We encourage more observations and analysis, but do urge caution with this latest report. The “wings” that the authors describe certainly could be the result of fragmentation, as so-called arclets are indeed correlated with fragmentation events. However, other possibilities exist:
1. Their appearance is remarkably symmetrical, which leads us to be a little more skeptical that they could be the result of a fragmentation. Fragmentation of cometary nuclei is typically an asymmetrical event, often with fragments trailing in the comet's tail, as was the case with 73P/Schwassmann–Wachmann and C/1996 B2 (Hyakutake), for example.
2. Prior to this outburst, several so-called “jets” had been reported in the area of activity that seems to be the source of these wings and thus it is possible that we are seeing enhanced dust emission due to jets in ISON’s nucleus. 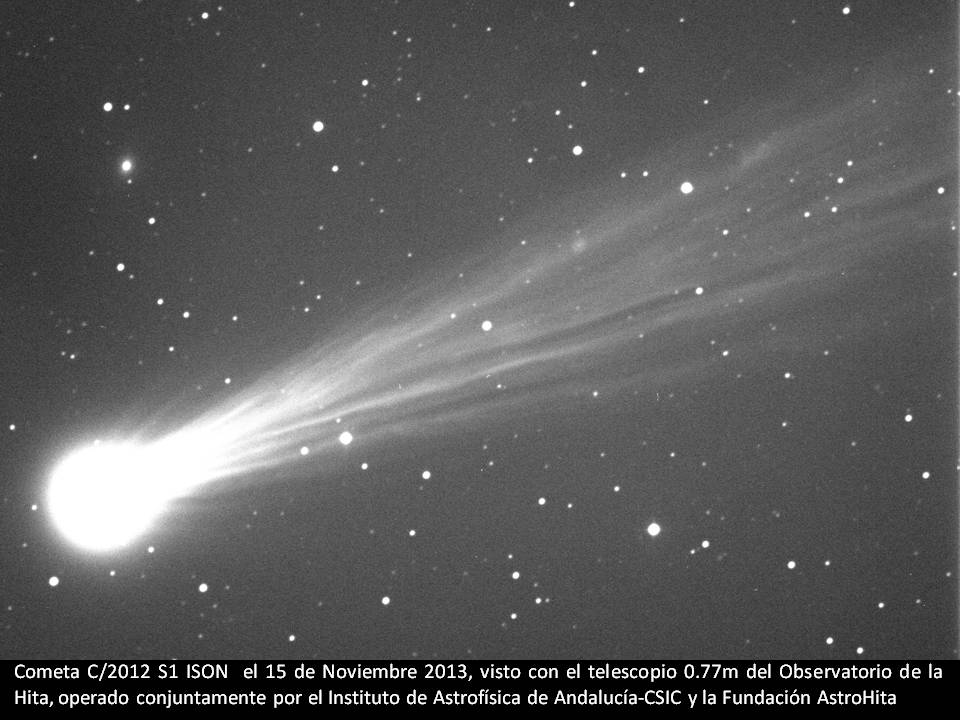 3. We could simply be seeing solar wind ion tail structures, perhaps after some solar wind interaction event, for example with a coronal mass ejection or a co-rotating interaction region, or some other solar wind density enhancement. Indeed, spacecraft observations certainly indicate such interactions to have happened (this will be the source of a bog post later this week), but whether or not that interaction caused this new feature is still unknown.
The CIOC Team supports and encourages reports such as this, and we certainly monitor them closely. Our motivation for this blog post is to urge this discussion to continue, and we strongly encourage further data analysis efforts and a community-wide sharing of information on this and related subjects.

For now we continue to monitor the situation, to see which one of these scenarios is occurring. If the comet has fragmented, we should see some dramatic changes in the next few days. Typically we expect a large increase in brightness followed then by a dramatic decrease in the comet's brightness in these situations. If instead jets are the cause, we expect the "wings" to persist and grow. If the behavior is driven by the solar wind then we should see continual changes as the solar wind changes. This is monitored by a number of spacecraft 24/7 and reliable solar wind models, so should be possible to verify.

for this time lot off disinformation agent..Be careful all
edit on 17-11-2013 by cheesy because: (no reason given)


That first picture is awesome cheesy..

posted on Nov, 17 2013 @ 07:58 PM
link
The 3rd picture looks an awful lot like the flying star transporting a man from the religious painting "The Crucifixion.


Great post!!! The mysteries of this comet are blowing me away! Just when I get use to one fact, here comes another just as odd! I will be so glad when the clouds are gone from my area so I can actually get some pictures!

Wow.
SO covers the whole gambit quite neatly and makes some interesting correlations along the way.
Everything's connected.
edit on 17-11-2013 by sageturkey because: (no reason given)


wow thats very Informatif sir.TQ So much..
this is From The Site..

Measurements on several dates (after reappearing from behind the sun) show that the comet's inner coma is brightening at a lower rate than expected, as if the activity level on the nucleus surface is not changing (or possibly decreasing) as it approaches the sun

aboutface
Thought some members would enjoy this too

Yes It All Connected! What a great Video!

AbleEndangered
Won't the comet increase speed as it whips around the sun as well?

Yes Of Course..Sun Gravity Pull Ison so Much..
this live Current Distance Etc
www.cometisonnews.com...
edit on 17-11-2013 by cheesy because: (no reason given)

AbleEndangered
Won't the comet increase speed as it whips around the sun as well?


Cheesy.. I think you are too heavily invested in this and your "respect at ATS" to remain in any way objective about this any further. Thanks for the links and information however but please remain open minded and allow for the possibility it may have actually done what the images suggest it has.


Cheesy.. I think you are too heavily invested in this and your "respect at ATS" to remain in any way objective about this any further. Thanks for the links and information however but please remain open minded and allow for the possibility it may have actually done what the images suggest it has.

Yes Sir Of Course Much2 Sory for that.. 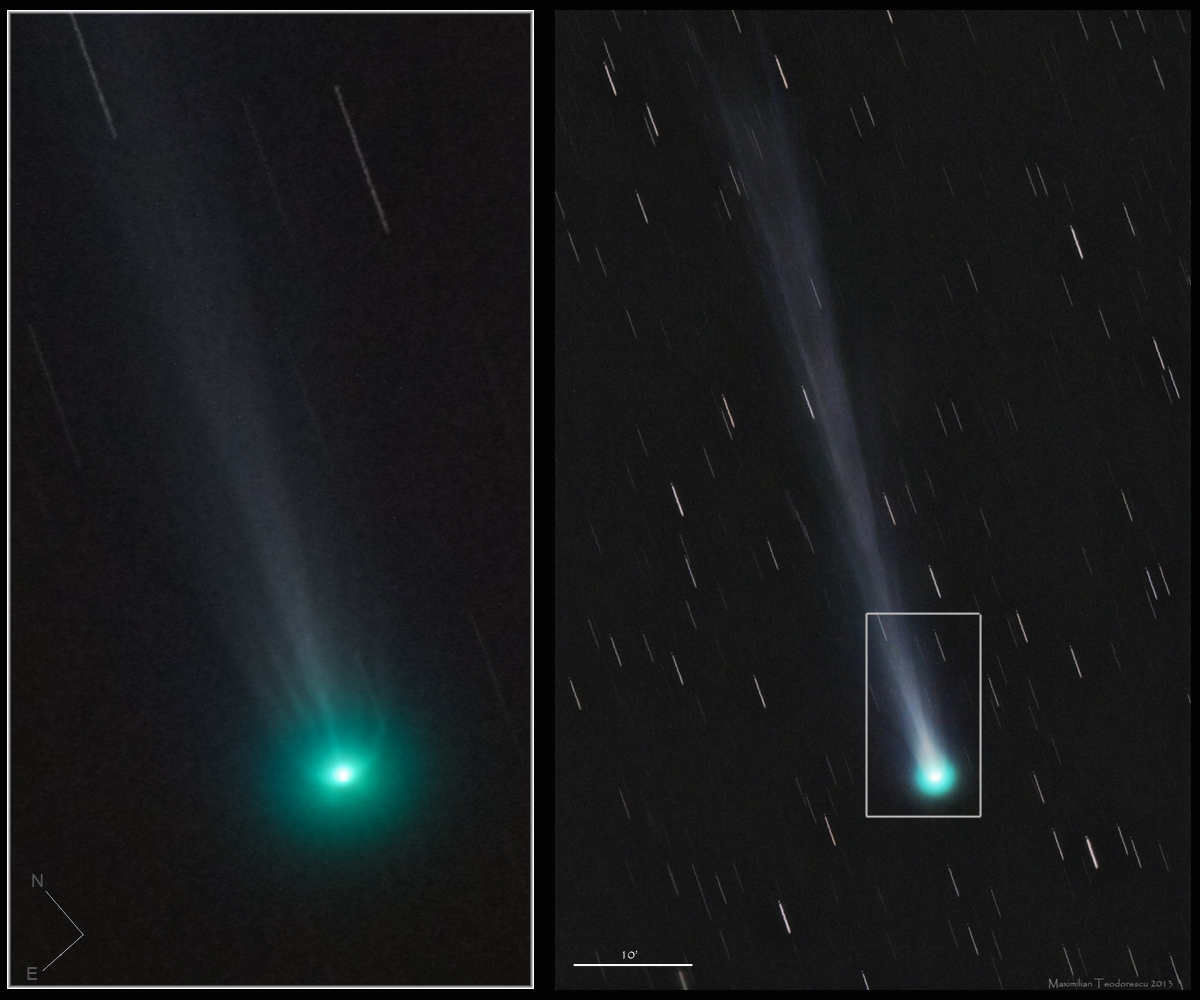 Do you know if those two pics were taken at or near the same time?

The one on the left looks really amazing. Seems it's "heating up" indeed...