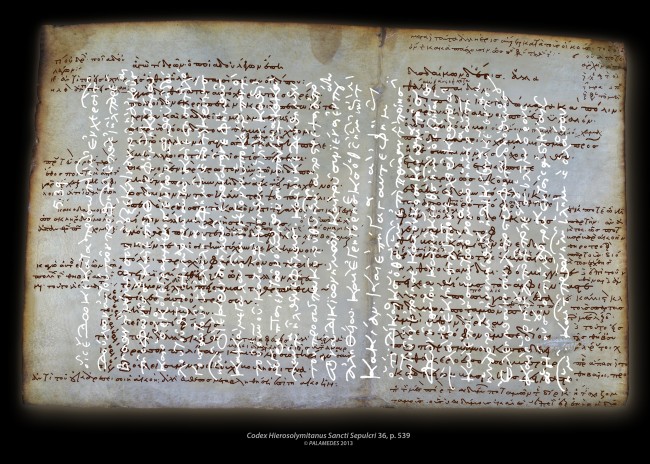 
The discovery of this work is of inestimable value for the history of philosophical education in the late antiquity”, says the discoverer of the manuscript, Dr. Chiara Faraggiana di Sarzana from Bologna University.

So, maybe this cutting-edge technology can and will be used for other manuscripts bringging us more revelations in the near future.


Thank you the thread looks interesting.. Does anyone know what the script says. The link on your OP is sadly not working..
edit on 17-11-2013 by purplemer because: (no reason given)


Thanks for the link to the medievalists.net site it looks interesting
edit on 17-11-2013 by gortex because: (no reason given)

However, if you go the the medievalists.net main page and introduce the title of this thread in the search box you`ll find the article I mention in my post.


Weird. I checked it and it seems to cut off half the link when you put it in here. Odd.

Wow very cool. I wonder what it says. Makes you wonder how many others have something like on them as well.

Going to read the link and thanks for that site link, it's pretty cool!
edit on 11/17/2013 by mblahnikluver because: (no reason given)

Your link in the OP is possibly glitching because it's not enclosed with url coding tags. It's usually better to encode them. Here's the direct link with the coding tags done (and with the last forward slash removed from the URL code, as that was also giving a bad read at the site's server.) :

Back to the subject: this is a pretty significant development as there may be thousands of old MSS that have been "washed and reused", so there could be more exciting finds in the offing in future.

Also, many thanks for the site info. I didn't know of medievalists.net and it looks like a great place for more reading and study.

posted on Nov, 17 2013 @ 01:28 PM
link
Definitely interesting. Maybe the hidden text is relevant to what the situation was. They hid a lot in ancient writings. It was for a select few that knew the codes. Funny it took so long for someone to discover this. This kind of background also appears on a few other texts I have seen pictures of.


Yeah, the link is finally working. thanks for the help

rickymouse
Definitely interesting. Maybe the hidden text is relevant to what the situation was. They hid a lot in ancient writings. It was for a select few that knew the codes. Funny it took so long for someone to discover this. This kind of background also appears on a few other texts I have seen pictures of.

I haven't read the link, but this is not some hidden writing, I'm willing to bet.

It's a palimpsest. Link.

Itr's not uncommon. Paper and parchment were expensive.

Many very old examples of palimpsests were found at the Nag Hammadi "library." Nearby, many more were found partially burned in what appears to be a trash dump.


Great find! Thanks for sharing it...

...and for reminding me why I chose my tagline.


Well, that explains what I have seen when viewing these documents. So it isn't really hidden information...well, actually it is but not for a special reason. The text that was erased could be a clue to what was happening though. If one culture overthrew another, they may have overwritten their writings and allow us to see something about the culture before since we now have the technology to do so. This is probably an important part of archeology, tracing the people before from writing that was supposedly erased. This should be able to boost knowledge of the older cultures around the world.

I suppose reading the old texts that were erased is already done by archeologists though. They probably thought of doing this long ago.

rickymouse
I suppose reading the old texts that were erased is already done by archeologists though. They probably thought of doing this long ago.

I don't think that is necessarily the case. It has been known that manuscripts were erased and the written over, but it has been a matter of waiting for the technology to catch up to really see what lay beneath with any clarity.