posted on Nov, 4 2013 @ 06:01 AM
link
Okay... Is there any limit to Facebook's invasion of privacy and tracking their users every move, thought and communication??? They've become the NSA of Social Media, I tell ya!

Facebook is working on new technology to track people's behavior on the site, including where and when your mouse cursor hovers, the Wall Street Journal reported Wednesday.

The WSJ spoke to Facebook's analytics chief Ken Rudin, who said that Facebook is working on a "massive increase" in the amount of data Facebook collects about users' behavior -- everything from mouse movement to when the Facebook app is open on your smartphone. All of this is in the name of targeted advertising and an improved user experience.

I have a question for everyone on Facebook? Is there no limit, no extreme they can ever go to, which will FINALLY get people to quit??

My wife and some friends are hooked on this like a narcotic. I see it at school, and at the risk of being ejected from their classroom, students still piddle around on FB while lectures are going on. It shouldn't be necessary to lock computers across the entire classroom like we're in grade school, but the FB fix seems SO addictive, it actually IS necessary to treat adults as children just to get their attention focused on classes they are PAYING to take. (rolls eyes)

So what say you, ATS? Is this too far? With Facebook, is anything going to be too far? This isn't the IRS or the Government. All one needs to do is just not log into FB again. It's like I've suggested stealing someone's kidney to even talk about it for some though.

I've never signed up for Facebook, and have only looked at it twice. It's like walking into a hall of mirrors, with a camera and a guy watching from behind each mirror. Gotta keep track of those teens flirting with each other, boots on the ground.

posted on Nov, 4 2013 @ 06:07 AM
link
Facebook usually goes too far IMO, but one can't really complain since it is optional to use I suppose. I am highly addicted to the sick, twisted, game of Candy Crush Saga and mostly use FB for that when I am bored. Other than that anything else I post has surely put me on someone's watch list in big government.

They are right up there with Google with their privacy invasion for sure, but it isn't mandatory to use it....yet. If people weren't so addicted to it, they wouldn't be able to get by with stuff like this so easily, but most are not willing to give it up in protest. FB will go as far as the users let it.

Literally LOL at Aleister.... I'm with you on that sentiment as well.
edit on 11/4/2013 by Kangaruex4Ewe because: (no reason given)

AliceBleachWhite
+3 more
posted on Nov, 4 2013 @ 06:10 AM
link
I think they'll discover a disproportionately large faction of their membership will spend a substantial bit of time looking at bewbs and cats.

Just the other day was some info that they can predict if a couple will break up within the following 2 months.
They have too much info to probe into your future life which can be very dangerous tools in the wrong (greedy thieving suits) hands.


The researchers were able to identify who was dating whom with 60 percent accuracy, much better than the 2 percent accuracy they'd get from random guessing. High dispersion also seems to be correlated with longer relationships. The study found that couples were 50 percent more likely to break up in the next two months if the dispersion algorithm failed to guess that they were dating.


Here's a diagram showing how they analyze the groups of friends you have to make the predictions.


They found that the shape, or “dispersion,” of your friends network is the key. You might expect that a cluster of mutual friends indicates two people are in a relationship but the opposite is the case: You’re more likely to have cluster of mutual coworkers listing each other as friends than a couple.
Instead, when two people have widely dispersed clusters that are linked mostly via the couple, that is the main predictor of whether you’re in a relationship. Here’s what it looks like: 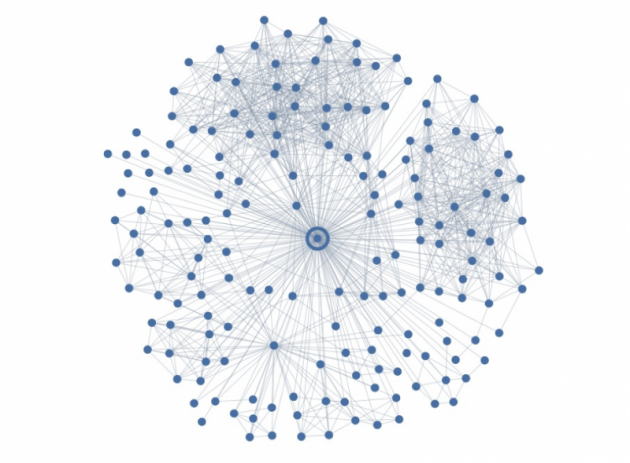 This is the creepiest form of data collecting. As its is behavioral, not strictly information about you, it all gets collected and sold to marketing companys that are going to paw over "the humans instinctual reactions" to develop ways to subconscious sell you more crap.

Our bodys betray us, say no to psychological and behavioral market research!!!

If a company has a product it thinks i might buy, my all means stick it on a billboard. Or even better, make a REALLY GOOD PRODUCT and it will sell itself! DO NOT trick people into buying things - its disgusting

posted on Nov, 4 2013 @ 06:40 AM
link
I've decided that I'm dumping FB after the holidays. Between the narcissism, the shallow 2-liner conversations sandwiched between FB game posts, and the privacy issues, I'm over it. It's mind-boggling how addicted some people are, and they're pissing away their time on Instagram food pictures & personal TMI.

I'll stick it out for the rest of the year and keep pitching Diaspora* on the sly, maybe a few others will be inspired to migrate over there. A part of me does fear it's just going to be a transfer of trash from one site to another though, and Diaspora* doesn't deserve to be dragged down like that.

My friends list is going to be in an uproar when the old "What's your New Year's resolution" question gets asked. "Jumping ship, I'll be on this other, saner one if you want to chat outside of email."


It's nothing new really, anyone who owns a website can purchase cursor tracking software for around $69 p.m to see where visitors are more likely to click on ads, offers etc.

At least with facebook it's out there in the open........imagine how many sites you visit are using the software and not telling you they are using it?

It's no biggy in my opinion.


It's no biggy if an average site wants basic information of what visitors are doing. It becomes something to me when it's a site that has membership to track people by name.

It's a big deal, in my opinion, when the site claims over 600 million active users per day and boasts 1.1 billion users per month.

That sounds like a fair % of those currently online and in any form of Social Media. Size matters everything, on some things.

It's a big deal, in my opinion, when the site claims over 600 million active users per day and boasts 1.1 billion users per month.

What do you think they are going to do with the information regarding your cursor movements?

It's marketing, they are telling you what they are doing, if anyone feels uncomfortable with it....don't use facebook.

As an internet marketer I'll tell you something.....you've seen nothing yet!


Violation of my privacy, as I see it, doesn't require a specific use I further object to...to be offended by it.

The fact THEY feel entitled to every thing and every aspect of movement on their site by hundreds of millions of people is plenty.

What does the NSA do with the OCEANS of data they record? 99% of it sits in databases. It'll never be seen or heard by a human being or likely accessed ever again, once recorded the first time. That doesn't change the level of violation it represents. One being a Government entity and one being private is about all the difference there is for the concept of the violation of people involved. That is a distinction without a difference, in my view.

Facebook is fast becoming a global, digital registry. No longer simply a social outlet for meeting people and sharing things, it is a central databank for millions, if not billions of people around the world.

To think for even one second that this resource is not violated... to be used as a tool by corporate and government offices... is, well, so incomprehensible that one has to wonder how stays afloat. I mean, the world is constantly griping about personal invasions of privacy and snooping by Big Brotha's NSA but Facebook (and Twitter), somehow and for some reason, remain.

I used to use facebook all of the time, and now maybe sign on a couple of times a week. A few months ago I was on all of the time, and that is because I was addicted to Candy Crush. I am not kidding, I was playing as much as I could. Now I am at level 95 and it is pretty frustrating, so I do not play much anymore. I have NEVER put anything on FB that is too personal. I have always kept it straight forward. I would hope that most people would do the same, but I know they don't. I do not need to know what you had for lunch, dinner, or what time you are going to bed. My gosh, some of my friends post almost their entire day on FB. I of coarse do not say anything, but thing to myself, WHY?

posted on Nov, 4 2013 @ 07:49 AM
link
I barely use Facebook anymore. The content is lame on there, the jokes are increasingly not funny (and overused to hell, memes are going to be the death of society...). I've never been much of a picture taker so I barely ever upload photos and my profile picture can go months or years without changing. Really the only reason I still have an account is so people can get a hold of me.

Why do people complain about the privacy intrusions? They volunteered their information as soon as they started posting it online. Anyone ever read their privacy agreement with Fakebook? I highly doubt it. That is why the document itself is pages upon pages of legal jargon. Almost as to confuse and bewilder the reader. Yet, people still put all their information out in the open.

For EVERYONE to read.

So why would users care if they track their mouse cursor? They don't seem to mind the adware being used by which sites they visit, or how about this little nook...the adware takes a specific IP and can ping a locale to specify about which location the user is from. To generate specific local information for the specific persons interests. Pretty amazing.

I see it this way, if a person thinks it is important to display their information to the public, it is their choice. Just don't complain about what companies can do with said information. Be it photos, personal details, posts, or mouse cursor movements. Hey, they signed up for it.

Read the T and C's instead of blindly accepting them.

Violation of my privacy, as I see it, doesn't require a specific use I further object to...to be offended by it.

Your on the internet mate.....your privacy is being violated every second of every day your on it!

You see those ads at the top and side of your screen right now?.....well your not seeing the same ones I'm seeing because your privacy has been "violated" and they are tailor made using data form your browsing history.

Seems to me your just upset that it's a big corporation that's doing the privacy invasion.

I think they'll discover a disproportionately large faction of their membership will spend a substantial bit of time looking at bewbs and cats.

I've never understood why people complain about the intrusive nature of the internet.......on the internet!