The report is written so badly that you wish Shadowhawk was on the investigation team just to keep the facts straight.

On the third page of the pdf, the crash is said to be located 53 nm (nautical miles) east of Alamo.

On pdf page four, the mission parameters keep it VFR (visual flight rules) and over the range. Of course, that conflicts with the statement on page three, since that location is well off the range, practically in Utah.

I took this line out of the F117 website: " It is possible that Stewart was going supersonic when he crashed..." The F-117A is subsonic. Maybe in a dive it might go supersonic, but not likely.

"about 100 miles north of Nellis AFB, just east of Tonopah. Stewart was just 40 minutes into a routine single-ship sortie when his plane crashed into the gently sloping terrain 60 miles east of Alamo"

Needless to say my faith in the F-117 website has gone a notch lower.

I like that spot, gariac. In fact, my eyes see a rectangle close by, where at some point there may have been some kind of, I dunno, recovery tent? 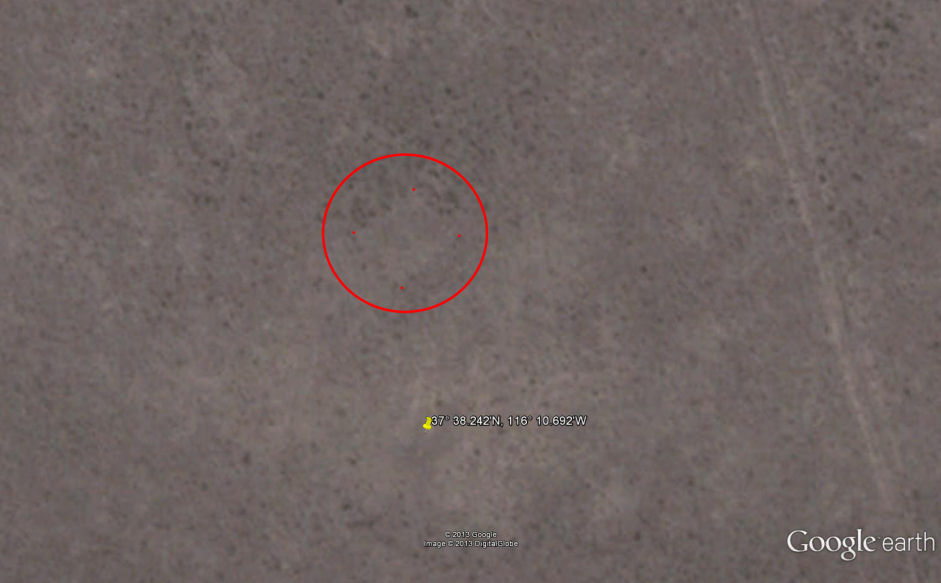 
I didn't spot the rectangle, but you are most likely correct that they parked something there. I've seen tents and trailers used. If you use the history option, you can see the vegetation taking root over the years.

The funny thing about Google Earth is that it is really hard to find a plane crash on it, even with the coordinates know. Usually the road they cut is a clue, if you have a USGS map handy for comparison. That is, the USGS map, being pretty old, won't document the aircraft recovery road. It also may not document roads that miners cut. But sometimes these planes crash by an existing road. So the Shadowhawk matra of "There is always a road" is correct, but maybe not a road cut just for the crash.

The only crash around the range that is very visible on Google Earth is the F-4 crash near Rachel. [Please don't post where though!] If you know where it is located, you can see shiny debris. The A-12 crash in Meadow Valley has some recent imagery, but the crash site is not obvious.

gariac
The only crash around the range that is very visible on Google Earth is the F-4 crash near Rachel. [Please don't post where though!] If you know where it is located, you can see shiny debris.

Next trip I plan on visiting that spot again, this time I will make it the wreckage, instead of peering at it in dismay from across a ravine.

The A-12 crash in Meadow Valley has some recent imagery, but the crash site is not obvious.

Can you PM some details about that one?

Now I don't post coordinates, but two years ago the Roadrunners did.
Walt's crash site

They took photos where Walt's body hit. I thought the spot was on a hill 3/10 of a mile to the north, but essentially the same area. They had three cameras with them, and the iphone shot has the geo coordinates, which are close to what they published. [I love iphone users. These people have zero concept of INFOSEC.] This location is very remote and I believe part of the road is washed out. Unlike Tikaboo, nobody visits here. If you head out there, I'd make sure somebody knows about it in the event you are not heard from in a reasonable time frame. When you drive in the area, be sure to look for bridges that are condemned. Now these bridges are part of the roadway, but you are supposed to drive down into the wash instead of using the bridge. They don't block them off. Remember, this is Nevada. This is a state where stupidity is not encouraged, but neither is it hindered. Nobody told me about the bridges. I was just driving along and thought that bridge looks terrible. I got out, noticed the trail down into the wash, then saw "condemned" painted on the side of the bridge, where of course a driver would never see it.

Walt punched out of the plane, so his body hit in a different location than the plane crashed. You can't drive to where the A-12 crashed, at least not in a car. Some hunters in a quad found it and posted photos on the internet, and then I found their tracks. [ATV...fast but not stealthy.]