World's first bitcoin ATM in a Vancouver, BC cafe: A bank circumvention or scam?

I remember hearing the word a few years ago and I knew it had something to do with virtual currency. I've even often thought what it would be like to have virtual money in the future, electronic money similar to the electronic mail we send every day. The ability to tap your finger and complete a monetary transaction faster than plugging nickles into a slot machine. However, little did I understand about how the currency system really works. Little did I know about 'gold standards' and the backing of currency based on the country that prints it. Little did I understand too, how paper money is printed endlessly without anything to really back it anyways. That was years ago.

I suppose all the skepticism surrounding the bitcoin can be summarized as the same skepticism that surrounded paper money when it was first introduced. But we got over it. So, I got to reading this article:

Behold the power of the bitcoin

Bitcoin is a digital currency. It is essentially an open source piece of software that maintains a distributed, peer-to-peer accounting ledger of all Bitcoin transactions. The Bitcoin network keeps track of who owns each Bitcoin, which prevents people from spending the same coin twice.

Bitcoins can be purchased using Canadian dollars, or any other traditional currency. Unlike loonies or dollar bills, Bitcoins are stored electronically. When purchased from an ATM, the machine will print out a ticket that allows the purchaser to take possession of the Bitcoin by inputting a digital key into an online wallet, computer or smart phone.

And so it would seem, Vancouver is the first city in the world to have a bitcoin ATM. 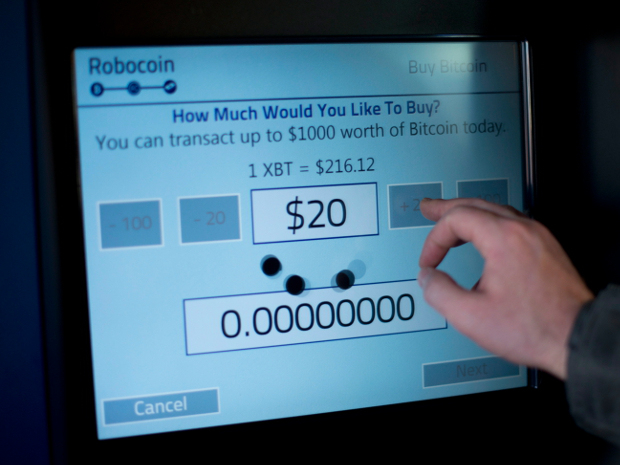 After reading both articles, I got to thinking. Not only can consumers circumvent the banks but also entire governments. Money laundering comes to mind. Also, circumventing port authorities money declaration while travelling. Keep in mind, I'm not advocating any criminal activity, just pointing out the wild wild west analogy regarding a virtual currency not held or controlled by an institution.

So what is a bitcoin worth? I don't know but this 4-year virtexCAD chart certainly looks impressive. Since May of this year the bitcoin has really taken off. I don't quite understand how to read the market but could this be the beginning of a wonderful new way to do business? I did read $60 was worth .27 bitcoin, not sure which though but you get the point. 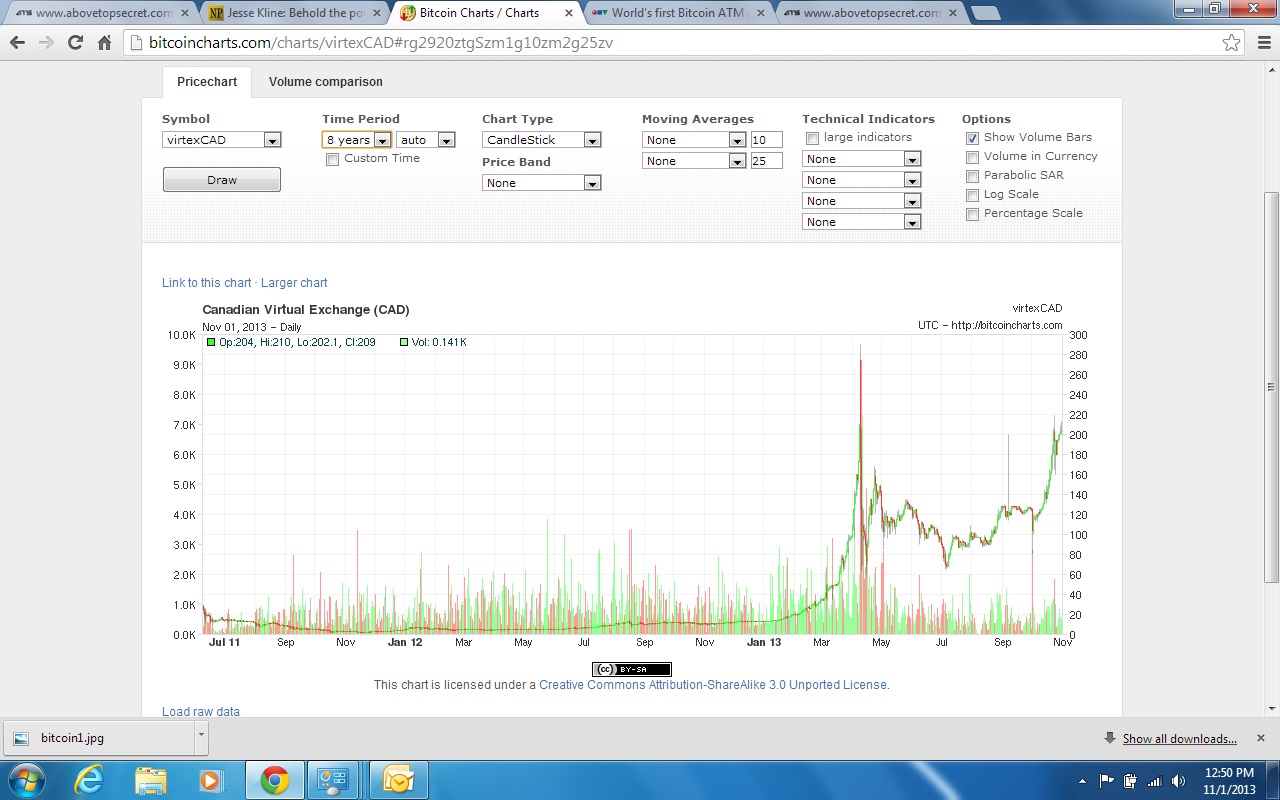 bitcoin charts
Virtual money will never lose value because it isn't overly printed beyond its means like paper is, according to the article. It seems, once this really takes off and virtual money ATMs are installed everywhere - like Leviton refueling stations for electric cars - the only direction for the value of bitcoins is up. What do you think?

As with any investment caution is best used, and when investing only use what you can afford to lose.

Bit coin is no different than any other kind of currency speculation, though its fluctuations seem to be more rapid due to the digital nature of this currency.

posted on Nov, 1 2013 @ 03:50 PM
link
One Norwegian guy bought 15 pounds worth in 2009 now they are worth 400,000. Apparently he had forgot about them until April this year when he was reminded in some way. Then he had to find his password because if he hadnt he would have lost them!


Something similar happened to me, Bought a few hundred to play with, forgot about them year later few grand.

posted on Nov, 1 2013 @ 04:20 PM
link
The creator of bit coins is a mestrious man suppsedly named Satoshi Nakamoto, a 30 odd year old from Japan. Hes never been seen in public but what more mysterious is that when he did communicate he always wrote in english, but spelt in both British & American. His name is a pseudonym in Japanese, Satoshi means "wise" Naka means "inside" or "relationship" And Moto means " the origin" or "the foundation".

Satoshi mysteriously went missing a few years ago and the ownership given to some guy who's names I'v forgotten. Have a reas about it anyway, very interesting & makes you wonderif there is a grander, more sinister idea for bitcoin.

n00bUK
makes you wonderif there is a grander, more sinister idea for bitcoin.

Like a one global currency being injected slowly into society?

posted on Nov, 1 2013 @ 04:53 PM
link
I really find all this bitcoin stuff actually rather complicated. Here's a clip explaining bitcoin mining which still doesn't shed much light on this. Why are "math problems" solved to create a coin? Weird stuff...

posted on Nov, 1 2013 @ 09:19 PM
link
Happy to hear for the Bitcoin ATMs. Hope it catches on, as I see the option as positive for those who use BTC is in conscience.

On the topic of it being snuck in as a global currency. Not Bitcoin, perhaps similar that can be better controlled by them-bankers, global elites, what have you-, to use it as a test but very limited so it doesn't gain control on it's don overtaking their crony capitalism dollars.

posted on Mar, 23 2014 @ 08:13 PM
link
The perfect ATM machine to buy and sell bitcoin from. A great product. Secure,easy to operate and convenient. All from an ATM machine. Visit www.bitcoinmoneyatm.com....