posted on Oct, 31 2013 @ 10:46 PM
link
Well, this was a surprise to find. The highly controversial program of Stop/Frisk in New York City is set to resume, due to a decision late today out of the 2nd Circuit Court of Appeals. This isn't what I'd call good news.

The three-page ruling unseats from the case the outspoken U.S. District Judge Shira Scheindlin, whose press statements defending her handling of the case smacked of bias in the eyes of the appellate court.

In August, Scheindlin found that the NYPD trampled upon the rights of mostly black and Latino men by stopping, questioning and frisking them in droves without reasonable cause. The court heard statistics from Columbia University professor Jeffrey Fagan showing that the roughly 80 percent of the 4.4 million stops made between 2004 and 2012 targeted black and Latino New Yorkers and visitors.

Now personally, I am supportive of cops having the ability to stop someone and question them if there is a clear indication of probable cause and wrongdoing. You know, like carrying a TV down the street at 2am, when up the street, the broken window of the local electronics store is all over the front sidewalk.

That sort of thing.

This is NOT that sort of clear cut policy that most citizens could see a logical basis to support. No, this isn't like that at all. 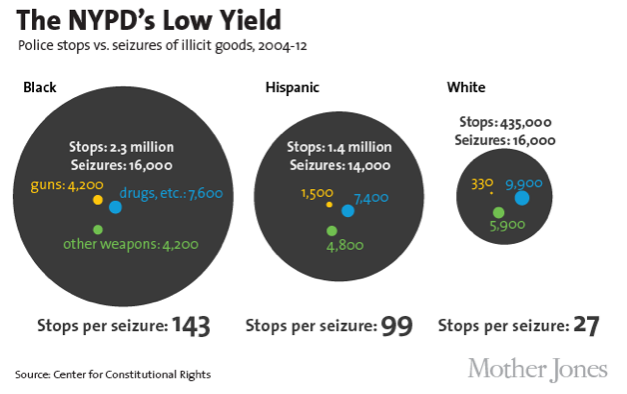 Now this Judge, whatever her motivations or however her ruling came about, had blocked this. The graphic above should speak for itself as to what was fundamentally wrong with this whole concept.

This next part should get anyone's attention.....especially for the source of it.

Her ruling ordered police officers to wear video cameras while stopping and frisking suspects, document why they made every stop, and face the scrutiny of a court-appointed monitor on guard for racial profiling.

New York City lawyers called the measures intrusive and hoped to get rid of this oversight on appeal, and city officials attacked the judge's impartiality. The New York Daily News reported, as the trial was going on, that an internal document of Mayor Michael Bloomberg's administration allegedly found Scheindlin more likely to rule against the NYPD on constitutional issues than her colleagues on the bench.

It's that last part that grabbed my attention, although the first part gave me a chuckle. I don't live in NYC, so I'd missed the particulars of some of this when it had gone into effect.

As it is, if you're in New York? It sounds like the NYPD will be back at it for stopping on what they deem to be a suspicion and maybe...but likely not, panning out to actually produce anything to show for trouble they caused a citizen.

The Big Apple seems a little rotten. At least, when it comes to the attitude and policies of the NYPD, in this situation.


Yeah.. This sort of thing is what I dealt with in Southern California and why I left it. Always..ALWAYS..checking a rear view when passing a cop because they could flip back just for the heck of it. It took getting used to when I arrived in Missouri. They don't do that here. In fact, I've been stopped twice in all my years here. Both times? I was speeding to the point of exhibition..as they call it. They even knocked that down for me so I didn't get clobbered. That's what it took though. Really being stupid ...

If only it were like that everywhere. It's how it should be.


LOL ... the cops are far better at picking out white perps. Wonder what white folks are doing wrong.


ashkeNAZI White Euro bloodlines get it easier it seems.


I have no inkling of understanding how Bloomberg hasn't been only kicked out of office, but hung in the middle of Times Square by now. How could anyone put up with this Nazi-like madman?


Ever been in a bad NYC neighborhood late at night?
You'll be grateful for stop and frisk.


Being too white in the wrong neighborhood gets you stopped lol. I speak from experience. And look what most of the white stops are busted with hint hint.


It isn't just NYC, it is America. Every day it is right before our eyes, and because we see it all the time we're mostly blind to it.

If you're not white, you're guilty.

Greg Giraldo (RIP) I believe it was had an astute observation about blacks in America and I'm paraphrasing "we don't notice poverty in America because the poor are black people".

Of course you'll have the good ole boys from the one party say that slavery was the best thing ever for them.


And just where was Bloomberg when Pee Wees bike was stolen ?

See that's how it really is. The cops don't want to have to work to find
a perp. Why should they have to do their Job when they can just trash our rights ?
edit on 1-11-2013 by randyvs because: (no reason given)