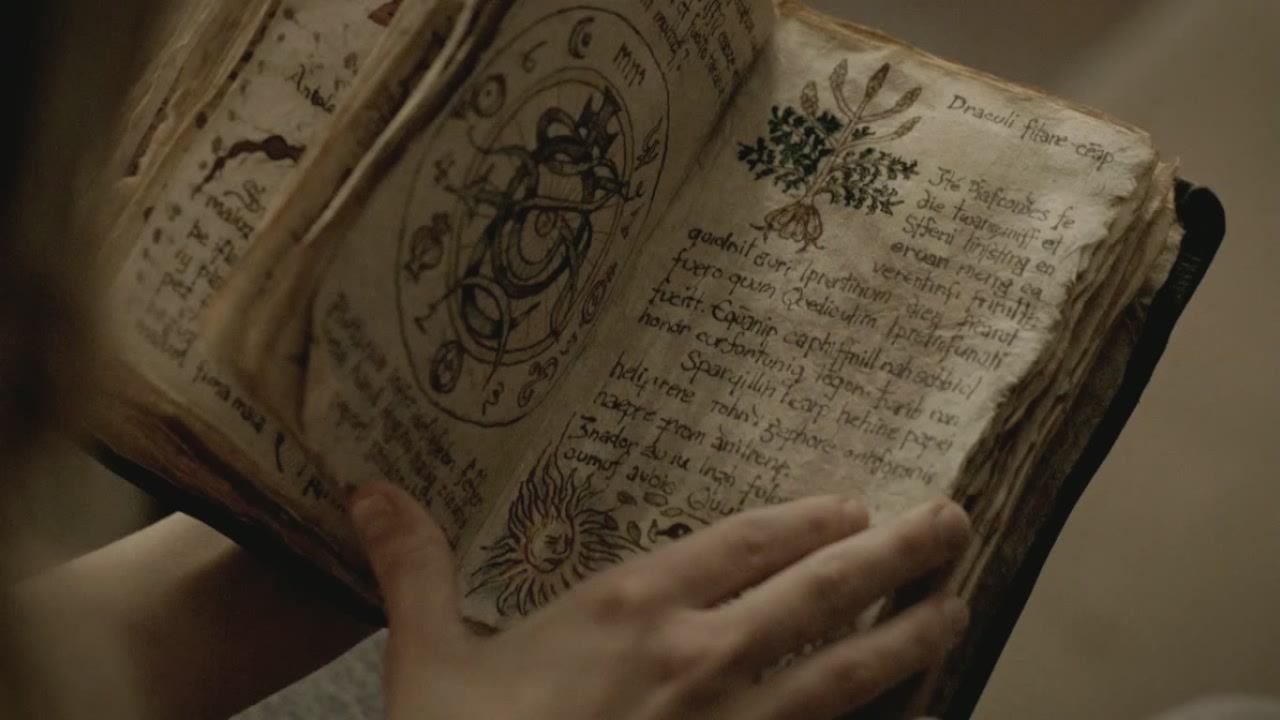 I conjure ye by the Indivisible Name IOD, which marketh and expresseth the Simplicity and the Unity of the Nature Divine, which Abel having invoked, he deserved 2 to escape from the hands of Cain his brother.


www.sacred-texts.com...
What you just read was a conjuring spell from the Key of Solomon, the grandaddy of all Grimoires.


Grimoire are books that contain a mix of spells, conjurations, natural secrets and ancient wisdom. They go back a very very long time through human history.

The name "Grimoire" is derived from the word "Grammar", specifically from the Old French word “grammaire” and was meant to describe books written in Latin.
Grimoire by the 18th Century became instead collections of spells, instructions on how to create magical objects, and guides to summoning demons, angels, and spirits.
While in modern days, “Grimoire” has come to encompass all magic. However, traditionally Grimoire were based off the magical traditions of Jewish, Muslim, and medieval Christian rituals and texts.

Written magical incantations come from ancient times, with the earliest found in Mesopotamia inscribed on various cuneiform clay tablets.
Zoroastra “the first Jesus” is said to be the inventing father of Magic.
The ancient Egyptians also employed magical incantations, (called Heka) which have been found inscribed on various amulets, Glyphs and other items.
The Library in Alexandria is believed to have housed a myriad of spells, which of course are lost ☹
The ancient Jewish people were beyond dabbling in magics. The Moses manuscripts dating to the 4th century, are said to be eighth Book of Moses (the first five being the initial books in the Biblical Old Testament), and teaches one how to conjure gods and control demons.

Other ancient historical sources that include a mention of magic are :
-Dead Sea Scrolls - astrology and the angels.
-Book of Enoch, His grandson was given books of magic by angels.
-King Solomon-see further down his is the grand daddy of Grimoires
The New Testament records that St. Paul had books magic and paganism burned in Ephesus; and so Magic became a hidden practice.
Judaism, Hidden Christian occultism and Islam kept magic alive.
The church saw two types of Magical books, demonic and natural magic.
Some Grimoires are said to be the product of a conference of magicians who wanted to consolidate all of their knowledge into one text in order to save them from persecution be Church officials .
The most famous Grimoire are listed below.

Books of Moses
The secret wisdom of Moses was a founding text of Rastafarianism. It also is said to be the missing extra books of moses, but paints him as a polythesist who was happy to raise and control demons. It contaons spell “tips” on how to generate money love etc.

Sepher Ha-Razim/The Book of Secrets/The Book of Amulets (3rd Century)
The Kabbalistic tradition says that the Sepher Ha-Razim was given to Noah by the archangel Raziel and then passed down to King Solomon, one of the major figures of the Old Testament for his wealth, wisdom, and magical power. Each section contains a list of angels and spells that can be performed. These spells are of a wide variety. They can be used to heal, attack foes, predict the future, and bring good fortune.

The Clavicule of King Solomon
This is the granddaddy of grimoires. Mystical books supposedly to be written by King Solomon he is said to have written it to help a magic user understand and fear the practice.
In medieval times it was classified as heretical but the Clergy had them hidden and poured over the writtings. One of the spells I found interesting is the angel Michael gave the king a magical ring. The ring, engraved with the Seal of Solomon, had the power to bind demons from doing harm.

The Book of Honorius
Honorius of Thebes came in a close second to Solomon in notoriety in the medieval period. The book tells one how to conjure and control demons, how to discover treasure, and how to save one’s soul from purgatory as well as instructions on how to receive heavenly and hellish visions, and knowledge of all science.

The Magus
Published in 1801 and written by the British occultist Francis Barrett, The Magus was a flop at the time but In the early 20th century a plagiarized version The Great Book of Magical Art, Hindu Magic and East Indian Occultism became a best seller.

The Necronomicon
I’m not a huge fan of early 20th-century writer of horror and fantasy HP Lovecraft,, but I know a few ATSers are! This is a work of fiction, but it still has a hold in Grimoire lore.

Book of Shadows
The founding text of modern Wicca – a pagan religion founded in the 1940s freemason and occultist Gerald Gardner. He used the old untraceable claim “I was given a copy of this "ancient" magical text from a secret coven of witches” It is used today in WICCA society.

The Picatrix/Ghâyat al-Hakîm fi’l-sihr/The Aim of the Sage/The Goal of the Wise (10-11th century)
The Picatrix is Arabic magic, more so astrological magic. It contained spells like “how to destroy a city with the Ray of Silence” which I know ATSers will claim is Alien tech!

Sefer Raziel Ha-Malakh Liber Razielis Archangeli/Book of Raziel the Angel (13th century)
The Sefer Raziel Ha-Malakh Liber Razielis Archangeli is considered to be one of the definite and most important books on Jewish magic. It is supposed to hold all of the knowledge of the Universe, bestowed upon prominent upon Adam by archangel Raziel after being forced to leave the Garden of Eden, God sent Raziel to teach him about natural magic.

The Munich Handbook/The Munich Necromantic Handbook/Munich Manual of Demonic Magic/The Necromancer’s Manual (15th century)
The Munich Handbook is a little spooky as it only discusses demonic magic and necromancy. Funnily enough it is believed to have been written by a clergy man.

Grand Grimoire or The Red Dragon
The Grand Grimoire is a book of black magic and is pretty much the spookiest evil and dangerous grimoire ever penned. The main reason for this, is because is specifically tells you how to summon Lucifer. You can get a list of all hells demons and how to cast black magic, but even occult practitioners don’t like to use it.

There are more! Hope you enjoyed the historical look at Grimoires, If anyone has Ancient Asian "grimoire" information please enlighten us!


I think she does!!
This thread just opened up without me even clicking on it.
Interesting......


hehe Not sure there is any ancient Open Sesame spells that auto open ATS threads.
edit on 31-10-2013 by zazzafrazz because: (no reason given)


I'm guessing it's in the Book of Shadows

It's the proper night for oddities, if it's not a spell, there's someone's invisible fingers touching my phone screen.
Twasn't me

Possibly this occurred when you were experimenting with a powerful herb.

I blame Zazz, and her Book of Shadows, reaching across the ocean, and very north.
I'm just glad she's not full of the wickedness she's claiming tonight

Interesting read up there.

We've all got our demons, tis the night to embrace them


If you believe the accounts of Aleister Crowley and MacGregor Mathers, then yes. It is.


awesome thanks for the link
I didn't include 1578: Eymerich - Directorium Inquisitorum - Witch Hunter's Bible, it kinda is like linking Hitlers Mein Kampf when discussing Judaism.

But what a fantastic looking velum book it is. Only a few were ever even bound, and one survives. Impressive.

Edit to add, I had Agrippa in my draft and l ooks like I accidentally left it off, and it is important for its link to lost ancient historical works.
Excellent pick weirdguy!


The books dealt with Elemental, Celestial, and Intellectual magic. These three kinds of magic are subdivided into many other different disciplines that include the four elements, astrology, Kabbalhaism, numerology, angelology, scrying, and alchemy. The three books were landmarks in discussing magic in scholarly and intellectual terms. They also contain a large amount of pagan and Neoplatonic magic. It is also a source of great curiosity as it makes references and provides extracts on magic from obscure and/or lost works from famous historical figures such as Pythagoras, Ptolemy, Plato, and Aristotle. Even by modern standards, they are considered to be the authoritative texts on magic by occultist


Mathers played chess with Pagan "gods" yet had to move the black chess pieces himself....couldn't even muster a pawn or bishop being moved let alone a magical dual.


Zazz does not practice magic!

She got it right, and doesn't need the practice any more...

posted on Nov, 1 2013 @ 11:07 AM
link
Very interesting thread. I'm glad you seized the opportunity to educate us in the matter of metaphysical manipulation.


You have to practice or you can't get good at it.


So are you a good witch...or wicked?

Couple of questions.
If there were texts as far back as Mesopotamia, How "fleshed-out" were these early incantations, or spells?
Are there indications that even as the Sumerians, and others of the area were enjoying the fact that they could now record everything through Cuneiform, that they were putting down information that was significantly older than the ability to write?

Also, is it referenced anywhere as to what might have been lost in Alexandria? Any writings by anyone that had access before the destruction?

posted on Nov, 1 2013 @ 06:24 PM
link
Apparantly a witch can exposed by declaring and accusing her of witch craft in public.

im proclaim Zazz is a witch and practicing the black magic.