A Game of Shark and Minnow -or- Waterworld Redux

I tried to post this in Breaking Alternative news but could never find a post button. I can only guess I don't have enough button points... or something.

This is a very unique and moving article regarding a potential powder keg in the Asian Pacific... where China is actively attempting to expand its domain and the story of a few Philippine marines watching it happen on a derelict, WW2 era LST.

This is one of those stories that doesn't get much press but now also one that could be one stepping stone to a deep regret in America and elsewhere for allowing our industrial plant to be sent to the PRC...

What lies ahead in the months and years to come... is anyone's guess.

A Game of Shark and Minnow

Ayungin Shoal lies 105 nautical miles from the Philippines. There’s little to commend the spot, apart from its plentiful fish and safe harbor — except that Ayungin sits at the southwestern edge of an area called Reed Bank, which is rumored to contain vast reserves of oil and natural gas. And also that it is home to a World War II-era ship called the Sierra Madre, which the Philippine government ran aground on the reef in 1999 and has since maintained as a kind of post-apocalyptic military garrison, the small detachment of Filipino troops stationed there struggling to survive extreme mental and physical desolation.


To ATS Mods - If I have made some error in posting to this new website format, I apologize.

Imagine living on a stranded, derelict WW2 era LST... your job is to guard your nation's waters against the People's Republic of China in the Pacific. 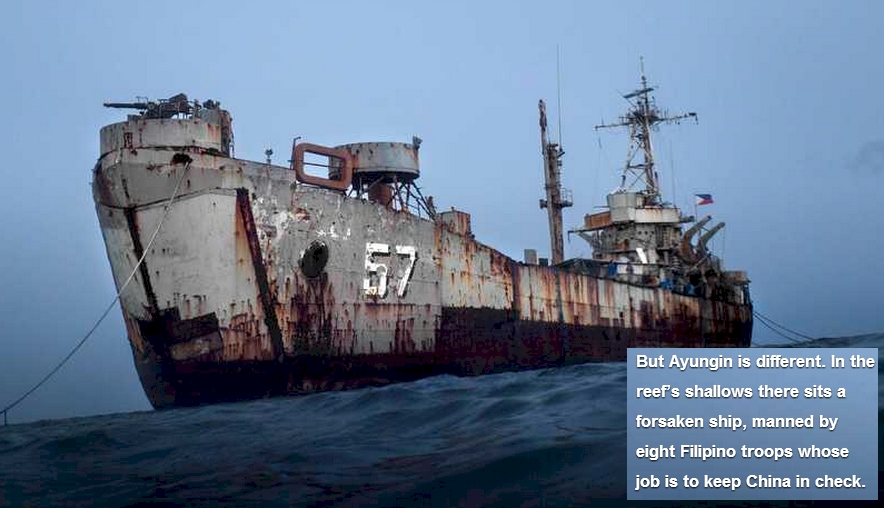 It's a worthy story and quite well presented. The link is listed here in the OP story quote.

In a way, it reminds one of that old movie... Waterworld.


Damn, that would suck. Being stuck on there all the time, it's no wonder they are depressed etc

I didn't read through the whole article as yet but if they aren't going to get another ship in there, they should just cut their losses and leave in my opinion. Or rotate the people out often etc.


“You’ve got the wrong science-fiction movie,” one former highly placed U.S. official later told me, when I described what we saw at Subi, and what it might mean for the guys on Ayungin. “It’s not the Death Star. It’s actually the Borg from ‘Star Trek’: ‘You will be assimilated. Resistance is futile.’ ” The scholar Huang Jing put it another, more organic way. “The Chinese expand like a forest, very slowly,” he said. “But once they get there, they never leave.”

Thank you for posting. The whole article was beautifully written and presented.

I hope the legalese works for I honestly doubt the U.S. has to stomach to do much more than throw money at the problem or occasionally show the flag on a battle fleet etc etc... China lives, trades, and when necessary can be a very rude noisy neighbor; key word being neighbor..... People remember Vietnam on both sides of the world.