"Unless they are the ones running the surveillance and spy grids" what ya think? 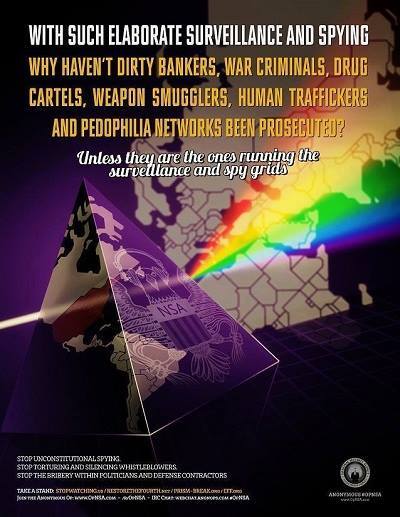 Simple question?
Mega data must have all the facts?
Every call?
All shipments?
All money transfers?
All orders for stuff and stuff to be done, must be recorded some where?

"unless they are the ones running the surveillance and spy grids"

Sounds about right to me...

"unless they are the ones running the surveillance and spy grids"

Sounds about right to me...

"unless the story is not real and it's a psy-op"

It amazes me that we see plenty of people posting stuff along the lines of 'You shouldnt believe the media, the media is controlled'.

Yet as soon as the media posts a 'negative' story it's suddenly 'Believe the media, they speaketh the truth!'

There was a thread a while back about some NSA employees being harranged when they went to visit a campus that was recorded and posted onto soundcloud. Not one of the 'harrangers' even bothered to ask if the stories were real. And in the actual recording you can hear the female NSA employee say 'You shouldnt believe everything you see in the media', or words to that effect.


"unless the story is not real and it's a psy-op"

What story are you referring to?
NSA surveillance?
Or the list of alleged crimes?


I have to agree with the OP on this. With all the surveillance that's going on I would think that the fed has mountains of evidence on alot of very powerful people. Dare I say enough to seriously damage the creditability of not only individuals but entire governments?
For example, there has been growing evidence that the CIA is behind one of the biggest drug smuggling rings in the world (as far back as Vietnam). What would happen if irrefutable evidence came forward that they were getting their marching orders from higher up the chain? What would happen to the creditability of the CIA or the US government for that matter (what little they have)?

What would happen if there was irrefutable evidence, who could enforce the law?
That seems to be the question. Supreme Court, president, congress, military or local law enforcement?
Who maybe only God knows...


"unless the story is not real and it's a psy-op"

What story are you referring to?
NSA surveillance?
Or the list of alleged crimes?


Everything related to the 'Snowden revelations'.

As was pointed out in the op, where are the major arrests? Considering the surveillance is supposed to be so vast, there appears to be very little in the way of achievements. In addition to the lack of achievements there is also a lack of other NSA contactors/employees, who also have morals (like Snowden allegedly has), who are willing to stand with Snowden and confirm what is supposed to be going on.

Of the thousands who work in the NSA/GCHQ you would think there would be others who would stand up as well.

A partial truth wrapped up in a big lie.

For years there have been stories of what the NSA has been up to.
Stories of homes raided, over internet searches ect...
Snowden has only added to a wealth of information already out there.
The NSA and associated alphabet agencies are nothing new.