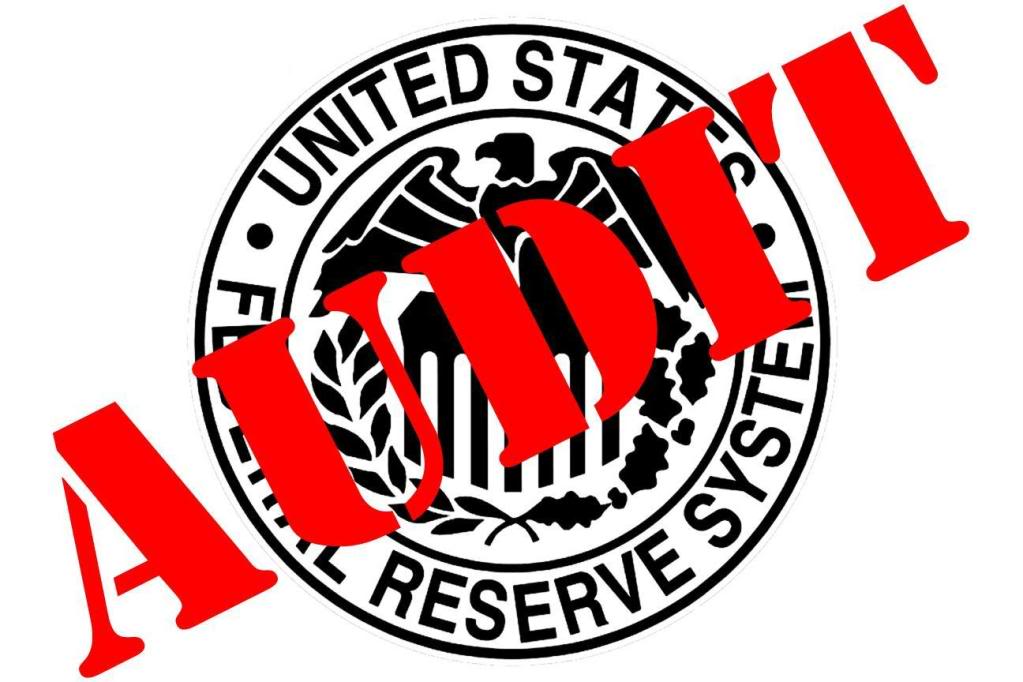 I know a lot of people are growing weary of blockage in D.C. after the shutdown but i think most of us can agree that the FED needs to be audited, FULLY. Last time, due to the efforts of Ron Paul's House "Audit the FED" bill, we were able to discover through the Government Accountability office that there was over 16 TRILLION bailed out to various central banks across the globe.


Last year, Ron Paul's "Audit the FED" was overwhelmingly passed (in it's entirety) the house with GOP support and over 100 Democrats voting in favor of it. It passed 327-98. Senate majority leader Harry Reid (contradicts his own rhetoric) blocked any vote on this bill and KILLED this bill on arrival even though he has been known to TALK about transparency at the Federal Reserve in the past when he was running for Senator (not surprised). I suppose one could assume he did this to spare Obama from going on record and veto'ing the bill, among other theories as to why he would be a hypocrite.

Now fast forward to today, we know over 70% of the American people support "Audit the FED" and it has momentum to easily pass the house. Rand Paul is already preparing for Harry Reid's senate block and is setting up the conversation early so this bill gets a vote.

Ben Swan summarizes the FED & why Harry Reid blocked "Audit the FED" and how he contradicted himself:


Kudlow on this topic:

I am writing to convey my objection to floor consideration of the nomination of Dr. Janet Yellen to Chair the Board of Governors of the Federal Reserve without also considering legislation to bring much-needed transparency to the Fed.

As the Senate debates the nomination of the next head of the Federal Reserve, there is no more appropriate time to provide Congress with additional oversight and scrutiny of the actions and decisions of the central bank. Therefore, I request that my bipartisan legislation, S. 209, the Federal Reserve Transparency Act, be scheduled for an up or down vote concurrently with the Yellen nomination. Similar legislation passed 327-98, with bipartisan support, in the House of Representatives on July 25, 2012. This same bill has been stalled in the Senate for nearly three years.

Accordingly, I will object to any unanimous consent agreement or the waiver of any rule with respect to the nomination of Dr. Yellen without a vote on S. 209. I know you have been a supporter of similar legislation in the past, and I hope that we can work together to pass this important legislation.


Good for Rand and good for all the supporters.

For once, I see my faith in humanity has been restored. Well, even if through one congressman. The people see what is wrong, the majority of congress see it too. They all know that the piper will eventually have to be paid. I truly think that the people who are against such an audit personally know the repercussions that would echo through this nation and are scared silly.

Which is why they all run for cover when the subject comes up.

Here is a man I can stand behind proudly.
2016 will be a disaster if anyone else gets into office besides Rand.


Can he do that? if so, WTF did he not do it a million years ago..before the Dinosaurs rather then now. It's a good idea, or rather common sense, should been done properly with close scrutiny every fart's end, but the timing is bad.


Can he do that? if so, WTF did he not do it a million years ago..before the Dinosaurs rather then now. It's a good idea, or rather common sense, should been done properly with close scrutiny every fart's end, but the timing is bad.

It is a senatorial procedure that he is invoking, last year when Harry Reid killed the bill, there was not much anybody could do but to watch it die.

This year, Ben Bernanke is stepping down as FED Chair (in shame I might add) and Obama needs to pick another chair to meddle with the world economy.

If everyone remembers, Rand Paul blocked Obama's CIA director earlier this year and filibustered for 13 hours demanding the answer to whether or not the Obama Administration thinks it is ok to drone strike American citizens without trial. That won Rand a lot of new supporters.

Some people have been critical of Rand and I can understand why but unlike his father, I think he feels it necessary to side with the establishment every so often.

Once he's President, the establishment is going to get a rude awakening. 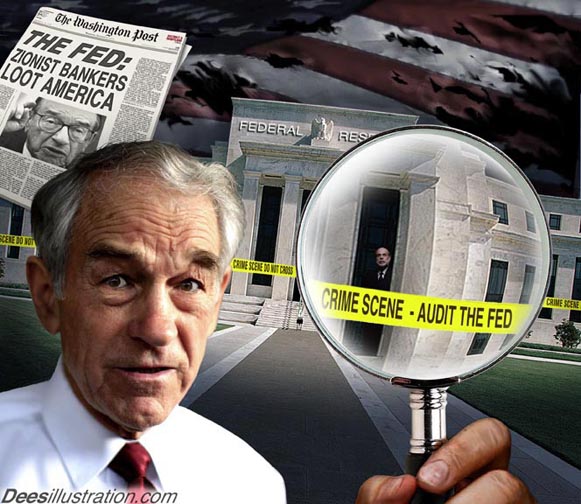 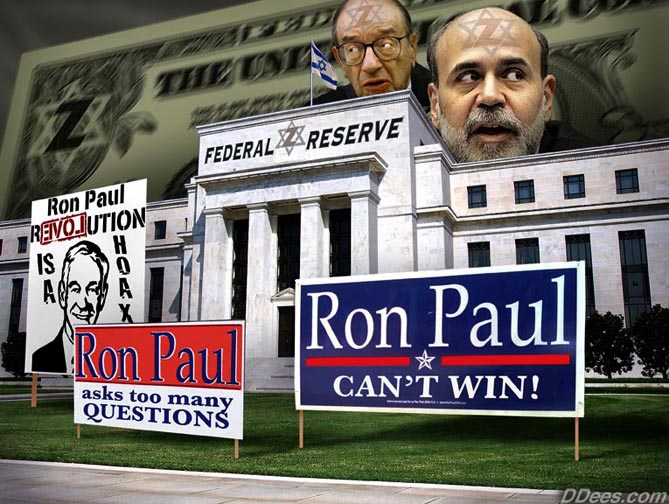 
Yeah, I think he saw where his father failed, so he is going to play the system to get elected. Pretend to be the normal, run-of-the-mill GOP candidate that the drooling majority is used to. Get elected, and then go full Ron Paul in the Whitehouse.

It would be a brilliant plan.

There is nothing left to audit.

There is nothing left to audit.


Based on what information? The GAO $16 TRILLION bailout revelations?

What makes you think these people will remember anything.

I fully support the audit and Rand.

I just don't think it will ever happen. It would be more lies.

What makes you think these people will remember anything.

I fully support the audit and Rand.

I just don't think it will ever happen. It would be more lies.


I don't think you quite see the full picture.

We all know an actual audit of the FED is going to be near impossible. If Harry Reid even allows this, the bill will be watered down by the Senate Democratic Majority and RINO Republicans before it gets passed.

The main point is to get these people on the record so we know exactly where they stand, just like how we know where Rand stands.

posted on Nov, 1 2013 @ 08:30 AM
link
No! just audit the military. POOP those guys with all their money wouldn't fight two wars for over 10 years with being apart of their budget. It was done off budget.

They don't care if children in the US die or our bridges fall down. For them it's me first and lets go and lose another war and make more billions for the 1%ers.

A full audit of our deference industry has and they say cannot happen.
But heck lets cut food stamps and argue about that.


When a guy tries to do right articles like this will pop up simply because people like him NEED political enemies.

Titled: Audit the Fed Bill is Just More Rand Paul Grandstanding — and It Will Hurt Women

No it isn't satire.


Are the Tea Partiers ever going to grow up?

The country didn't like it the last time you tried to hold something hostage to get your way....they aren't going to like it this time.

It's not governing...it is being a child and throwing a tantrum.


read your link.......how can this even be printed its soo insane they think by auditing the fed it will screw over "post menopausal" women? lol or screw over one random female economist( i dont see how shes getting screwed can some one explain it to me?)

For us laywomen who can't distinguish supply from demand curves (but only understand and aspire to Project Runway model Heidi Klum's curves and assets), how does the Federal Reserve create better economic performance? The Federal Reserve Act says that Fed has a mandate to maintain price stability (low inflation) and maximum sustainable employment (keeping unemployment rate near its long-run equilibrium rate around 5.5%). Price stability means it's easier to save for the retirement years past menopause or finance new companies to better balance work and families if inflation rates are low and stable. Those are favorable macroeconomic conditions to create jobs for women who want to be working. The Federal Reserve Transparency Act that Rand Paul introduced is a misleading misnomer. When people say make the Fed transparent, what they mean in the business world is check the books: make sure the balance sheet and income statements are right. The Fed really is audited normally, because its data is publicly available on its website. In reality, the bill is designed to limit the independence of the Federal Reserve. It's also designed to derail the nomination of a female rock star in her own right, Yale-educated economist Janet Yellen.

can any one clarify if this makes any kind of sense because if it does im not seeing it..... comments in the article are gold btw number #3(down from top) especially it seems this author thinks women only understand pop culture references and seems to have a great lack of confidence of her genders overall intelligence level.
edit on 8-11-2013 by RalagaNarHallas because: (no reason given)

posted on Nov, 8 2013 @ 06:02 PM
link
He can do it now because Obama is a appointing a new chairman to the fed. It's the only time he can filibuster and expose the feds nationwide, unless they vote on his bill.

Harry Reid refuses to allow a vote on the bill. Here is his chance to counter him.
edit on 8-11-2013 by amfirst1 because: (no reason given)