Earth-Sized Lava World is an Enigma

The planet is about 1.2 times the size of Earth and orbits its star around a hundredth of the distance between the Earth and our Sun leading scientists to believe the planets day side is molten , although they are unsure whether that applies to the night side . 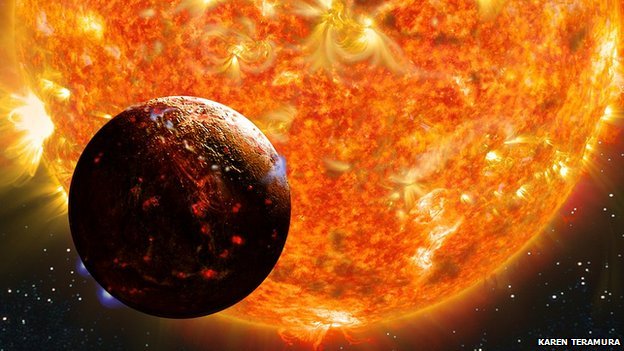 The enigma in this story is how did it get there ....

Could it have been an orphaned planet that was captured by the star or is that just too much of a long shot ?

Interesting times we live in. We're learning so much yet still know so very little about the universe around us.

Wouldn't the chances of that happening be....um....astronomically low?
edit on 30-10-2013 by LightAssassin because: (no reason given)

Wouldn't the chances of that happening be....um....astronomically low?


Yes plus add the chance of us finding it and they're some big numbers , I'm no expert so am not sure if such a thing is even possible but maybe it could happen .
Perhaps Phage will happen along to deny my ignorance or confirm my Genius


I think that's the joy of living now , so much cool stuff being discovered and a stream of new equipment being deployed , it's been a long wait but (hopefully) in 2018 The James Webb Space Telescope launches and that could open up a whole new realm of discoveries , as you say Interesting times we live in .

From the link in the OP…


If true that is a toasty place. Unrelenting radiation blasts the surface raising the temperature to thousands of degrees. There would be no atmosphere, having been wiped away by the close proximity to the sun.

But the back side, if tidally locked, could be as cold as mercury in our system.

Mercury rotates real slow, it is not "locked" to the sun. On the back side the temperatures are still way below freezing. And on the side facing towards the sun they are boiling. As high as hundreds of degrees during the "daytime".

ETA: What is that movie with Vin Diesel where he's on that planet running from the sunrise???
edit on 30-10-2013 by intrptr because: question


Thanks for the link mate I'm not really up on Mercury but yeah that is an extreme place , I remember some news a couple of years ago that they believed water ice was there too , if that's not two steps south of weird I don't know what is


Diesel does it at least twice, in Pitch Black, and the Chronicles of Riddick. I don't know if he does it in the 3rd movie though... lol

If the planet couldn't have migrated from an outward formation, how did it not fall into the sun then as it must have come from outside the system, as another poster said above me? Or planets DO come from inside the sun and are spitted out at some point?...


Diesel does it at least twice, in Pitch Black, and the Chronicles of Riddick. I don't know if he does it in the 3rd movie though… lol


Thank you for your time. Now we get to see what living (or dying) on such a planet might be like…

If the planet couldn't have migrated from an outward formation, how did it not fall into the sun then as it must have come from outside the system, as another poster said above me? Or planets DO come from inside the sun and are spitted out at some point?…


Why not? Look at Saturn. Moons are forming in the rings. They call them Shepard Moons. Personally I think Jupiter's Great Red Spot might hold a moonetesimal forming in there. There is a satellite heading that way with a radar on it that can probe beneath Jupiter's cloud layers. I hope they point it at the spot.

posted on Oct, 31 2013 @ 12:39 AM
link
Astronomers have found a lot of "hot Jupiters", gas giants that are in very close orbits around their host stars. Perhaps this planet is the core of one of those 'hot Jupiters', having had it's atmosphere blasted off long ago.

posted on Oct, 31 2013 @ 06:13 PM
link
Here's a site which gives some technical information on the planet and its star KIC 8435766 and has an animated Visualization of the planets orbit .
www.openexoplanetcatalogue.com...


Well, you would think if a Gas planet was orbiting that closely to its star that the gas would burn up instantly. Isn't Jupiter comprised of Helium, and Hydrogen? If so, imagine if Jupiter orbited our Sol that closely; It would most likely be just the core left..... Unless I'm completely off.

Two systems passing by each other?

We have already had reports of starless planets roaming about as well, so maybe this was one of those? One in a million shot of getting grabbed and tidally locked.

you would think if a Gas planet was orbiting that closely to its star that the gas would burn up instantly.


I understand that it isn't, but how would we know if it wasn't in the past. Either way thank you for bringing this article to ATS. I saw it posted on msn.com and was hoping to see it discussed here. S & F.

i don't know much about space and the planets, but could it be possible that the sun was once a planet
and that the smaller one was its moon .

at least it would explain their close relationship .

posted on Nov, 2 2013 @ 01:11 PM
link
Anything is possible, but since none of the wiser member have replied to your post I will try to explain it.. Under the current theory, suns form through a process called accretion. during accretion clouds of dust, and hydrogen (and other gases) begin to compress into spheres due to collapsing gravitational force. Once it gathers enough gas, it begins a process called nuclear fusion. During this process the sun converts hydrogen into helium, releasing overstocked energy in the form of photons. If this theory is proven true, then your theory wouldn't work.

This may help you understand.