posted on Oct, 30 2013 @ 11:34 AM
link
Hey... I've been trying to make a really nice and well put together thread on this, but, you know, I've just not had a lot of free time and usually what free time I do have I spend BROWSING instead of actually working on a really good topic. I just want to get a feel for how you all think and what you all think about this specific subject.
Things like, the "Heavenly City Plan" (Jerusalem), units of measurement (imperial or metric?), circle and spheroid measures.... do you think, for example, that it's completely necessary in all cases to use pi as accurately as modern science allows? For example, the Ancients generally tended to use measures of pi that most of us would consider highly inaccurate (really? highly?) 22/7 = 3 and 1/7 or, 3.1428... (where it breaks off from pi) that is good to the nearest hundredth. Fibonacci "rediscovered" the Fibonacci pi, which is 864/275 which is equal to 3.1418181818... which is accurate to the nearest thousandth of pi... and then the "learned astronomers" of China used an even more accurate pi 355/113, which is equal to 3.141592929292... which, is pretty flippin' impressive, being correct to several millionths part of one percent.... and of course, lets not forget about the Ancient Romans who used the value....3 and 1/8...or 3.125, correct to a whopping tenth... There isn't a thing as a perfect circle on this planet that I know of, so to me, it doesn't seem like a big deal that we don't use the exact pi in construction or otherwise...
I'm getting off track here... what are YOUR thoughts on these things? Do you prefer imperial over metric? Why? Metric over imperial? Why?
I personally prefer metric when doing calculations, only because base 10 is a lot easier to work with... but lately, I've been sort of having this inner struggle within me, a sort of spiritual-mental warfare with myself... because the entire basis of the metric system is built upon a false premise! The more research I did... the more and more imperial seemed like the 'correct' way to build.... and, you know, my entire life I've used metric, and imperial was sort of like that ugly cousin that you were forced to hang out with but you never enjoyed it... and then that ugly cousin became a really good friend later on!


These are the sorts of things I lose sleep over....
Cheers, don't forget to let me know what you all think
/_\.G.R.E.

thanks for sharing your thoughts, looks like you are full on in to numbers! I prefer metric but that's because i am used to it. With numbers I think it depends what you are doing and the type of person you are. So no general rule. I do a lot of tiling and that requires measurements, but my best results come by just looking. Only on the final cuts does the measure tape become essential.Perhaps when I look, my brain uses a superior maths to numbers!

posted on Oct, 30 2013 @ 07:33 PM
link
I was a Carpenters' Apprentice for a couple of years, and had to do some floor-tile work. It was a great time, but I didn't particularly enjoy being on my knees for 8 hours a day. You know, there are some beautiful geometries that can be done that are not only meaningful and beautiful but can add to the, I guess what we will call symbolic nature of the entire structure.
For example, the other day, I was waiting in a line-up waiting to get some coffee, and I looked down, and I saw a square, within a square, within a larger square. Earlier that day I was reading a book which had thoroughly explained how to construct a square of dimensions 1, and then construct a square with exactly double the area. The way to do this is to construct the square 1, then make a 'large' square with dimensions 2, so now we have a square with quadruple the area, then we cross-cut the large square with dimensions 2 diagonally (so we make in essence, triangles in each square of dimension 1) and each now we have a square with dimensions 1.5 which makes it have an area that is double that of the square with dimension 1.
It's a lot harder to explain than it is to simply observe, and it really struck me as amazing when I got lost into the pattern of floor tile.


But the actual exact formula for pi is 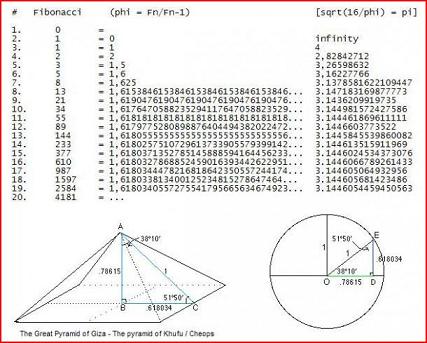 But I see the old Pi in the pyramid
is still around turning early French Archaeologists
into obsessed recreationists who are "certain" that
the Ancient Egyptians must have had differential equations.

"How could the ratio of the base to the height contain pi !" they reason to themselves. 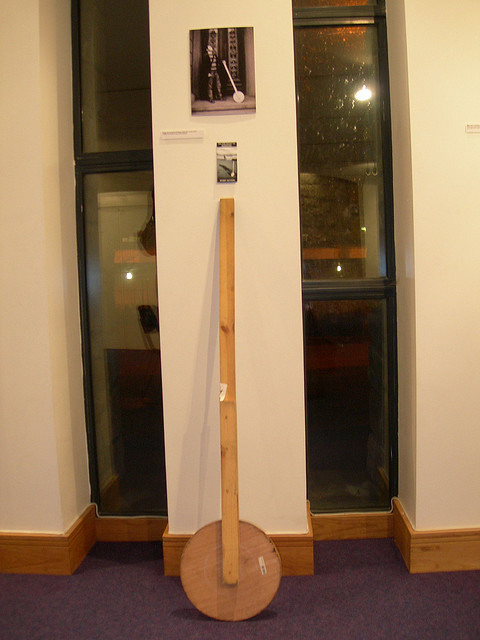 The Ancient Egyptians may have had a trundle.
If the pyramid is 100 cubits tall, then yes pi will
appear in the ratio of height to base because the trundle
was used to measure out the lengths of the sides.

This presupposes that the Egyptian trundle was one cubit in diameter.