MSNBC Host: "The Clintons represent a style of honesty that the public craves right now"


Yea exactly. The economy was so great during those 8 years that the biggest thing we had to complain about was a man's tendency of sexual deviancy (like he's the only man to cheat on his wife )


After the first year of Clinton, the Senate and House were controlled by Republican Majorities. That is the only reason Clinton didn't run us into the ground like Obama has. They're both peas off the pods of communism, and favorites of TPTB.

The reason he was disbarred from being a lawyer was not that he cheated, it was that he lied under oath.
edit on 10/06/2013 by Tusks because: (no reason given)

The republican party does not have a candidate for 2016. Hillary is at least a known entity -- we know she lies, and we know that she knows where the bodies are buried. Obama is simply pure evil and is destroying this country, that is his mission in life. Hillary just wants money...so give it to her and be done with it.

So basically, for those keeping score, it won't be until 2024 before we see some movement in the USA to the center/right in the white house.

God save the usa!

UnBreakable
Besides Monica Lewinsky and Benghazi, they're honest people.

Ironic in that in both cases, people got screwed.

chiefsmom
It never ceases to amaze me how dumb the media thinks we are. But to be fair, john Q public does seem to have a very short attention span. And apparently memory as well.

Wasn't Clinton's (Bill) sexual scandal one of the biggest in it's day? How can anyone forget his blatant lie? Yet the media calls this family honest?
There will be no way in hell I could ever vote for Hillary. I feel sorry for anyone that does. She is scary as hell.


The scandal was never that big outside of Washington and the conservative media. The only reason why it stayed in the news so long was the willingness of the Republicans to spend millions of dollars on the hearings and investigations.

The sex thing probably increased his popularity among men except for the sexually repressed social conservative types.

phantomjack
Obama is simply pure evil and is destroying this country, that is his mission in life.

"What difference, at this point does it make?"

You are SO BAD that the media is saying that the Clinton's are a paragon of truth.

OMG I never thought about it that way

Question is ... does anyone think the Clintons are actually honest?

I think they are TRAITORS!
Chasing the Dragon: Clinton's China Policy

June 1989. After the Chinese government turns on pro-democracy demonstrators in Tiananmen Square, the Bush Administration imposes sanctions on China, including a moratorium on high-level visits and military cooperation...

March 9, 1992. While campaigning for President, Bill Clinton says, “I do not believe we should extend ‘Most Favored Nation’ status to China unless they make significant progress in human rights, arms proliferation and fair trade....

November 18, 1993. President Clinton decides to permit the sale to China of an $8 million supercomputer capable of performing 958 million calculations per second. He also lifts the ban on selling components for China’s nuclear power plants.

November 19, 1993. Chinese President Jiang Zemin meets informally with President Clinton at a conference for Asian-Pacific Economic Cooperation (APEC) leaders. Afterward, Clinton says, “I think anybody should be reluctant to isolate a country as big as China with the potential China has for good.”...

There is a heck of a lot more. Clinton sold out the USA for campaign contributions from China.

In the end, I think we actually had a surplus,

Yes and that is where the Social Security funds went that Obama is now threatening us with. Clinton “balanced” the budget by looting SS He replaced the fund dollars with worthless IOUs.

The following excerpt is from the 1998 Senate Budget Committee session. (Clinton served as the 42nd President of the United States from 1993 to 2001)


U.S. SENATOR ERNEST F. HOLLINGS (D-SC):
Well, the truth is...ah, shoot, well, we all know there's Washington's math problem. Alan Sloan in this past week's Newsweek says he spends 150%. What we've been doing, Mr. Chairman, in all reality, is taken a hundred billion out of the Social Security Trust Fund, transferring it over to the spending column, and spending it. ...and hollering surplus, surplus, and balanced budget, and balanced budget plans when we continue to spend a hundred billion more than we take in.

That's the reality, and I think that you and I, working the same side of the street now, can have a little bit of success by bringing to everybody's attention this is all intended surplus. In other words, when we passed the Greenspan Commission Report, the Greenspan Commission Report only had Social Security in 1983 a two hundred million surplus. It's projected to have this year a 117 million surplus. I've got the schedule, I'll ask to put in the record the CBO report: 117, 126, 130, 100, going right through to 2008 over the ten year period of 186 billion surplus. That was intended; this is dramatic about all these retirees, the baby boomers. But we foresaw that baby boomer problem, we planned against that baby boomer problem. Our problem is we've been spending that particular reserve, that set-aside that you testify to that is so necessary. ...

We owe Social Security 736 billion right this minute. If we saved 117 billion, we could pay that debt down, and have the wonderful effect on the capital markets and savings rate. Isn't that correct? Thank you very much, Sir. Thank you, Mr. Chairman.

GRAPH of the looting of Social Security

just goes to show you, how the msm, and tpb think that we the public have short term memory.

As much as I hate to admit, with as bad as Obama is, I will take the lesser of the two evils, and that, right now, is Hillary Clinton.

Wrong choice. Obama is a disinterested puppet without much in the way of brains. Hilary is not only more intelligent she is much more ruthless and that makes her a lot more dangerous.

chiefsmom
It never ceases to amaze me how dumb the media thinks we are. But to be fair, john Q public does seem to have a very short attention span. And apparently memory as well.

Wasn't Clinton's (Bill) sexual scandal one of the biggest in it's day? How can anyone forget his blatant lie? Yet the media calls this family honest?
There will be no way in hell I could ever vote for Hillary. I feel sorry for anyone that does. She is scary as hell.


Well I agree in a way that Americans are waking up, but the majority are still dumber than ****, especially when it comes to ATS terms. If the majority were truly awake this would have all been over years ago.
Firepiston

After the first year of Clinton, the Senate and House were controlled by Republican Majorities. That is the only reason Clinton didn't run us into the ground like Obama has. They're both peas off the pods of communism, and favorites of TPTB.


While this opinionated speculation and bandying about words like 'communism' to fit some go-team GOP revisionist history take on things is cute and all, I recommend you review the following link:

The Budget and Deficit under Clinton - FactCheck.org


While also entitled to your opinion, I, again post the link:

The Budget and Deficit under Clinton - FactCheck.org

A: Yes to both questions, whether you count Social Security or not. 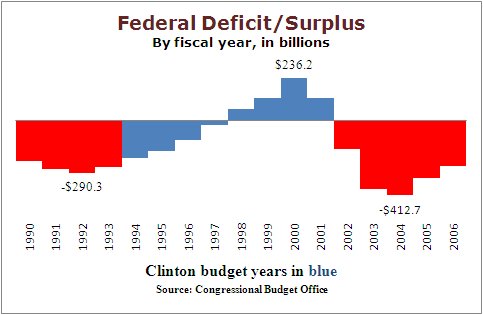 The Clinton years showed the effects of a large tax increase that Clinton pushed through in his first year, and that Republicans incorrectly claim is the "largest tax increase in history." It fell almost exclusively on upper-income taxpayers. Clinton’s fiscal 1994 budget also contained some spending restraints.

It's nice to have an opinion and even some party affiliation to whomever one thinks is their "team", but, when it comes down to it, look at the numbers.
Bush I and Bush II are clearly below the line on the graph above and the effects of their administrations are catastrophically immediate.
This is especially so with little Bush.
Not only did baby Bush spend the 236 Billion surplus, he drove over the median, and crashed the whole country into $412.7 Billion Deficit, which had it not been for the surplus would have totalled out at well over $640 BILLION.

Go GOP. wahoo. Spend that money and further pad the pockets of those that already have money. Mission Accomplished!
If anyone's a traitor to this country, it's baby Bush.

MichiganSwampBuck
I think that "style of honesty" must at the very least imply deception or "spin".

Look at the major lies of our more recent presidents,

Bush Jr. - weapons of mass destruction and terrorist connection in Iraq after 911

Bill Clinton - I did not have sexual relations with that woman.

Obama - Just about every other word he uttered.

I do have to hand it to Bill for trying to spin oral sex as not being sex, apparently that changed public opinion about that particular sex act.


So let me get this straight.....You are comparing taxes, ruining the economy, war, jobs, OBAMA, etc.....With someone who lied about having sex?

What has this world come to?? My lord, Bill Clinton was an absolute GOD in the white house compared to what we have had over the past 2+ decades!!

There is no honesty there. Just look at Hill's testimony on Benghazi. That woman is the queen of coverups. Billy was getting BJ's in the Oval O while his SS guys looked the other way.

Honesty is not what the Clintons are known for.


Well, wasn't that a good distraction? They could have exposed other things that were going on, but no just a part of the dog and pony show.


Please tell me that you are been sarcastic, Billary is one of the biggest pieces of crap politicians in this nations next to Nancy Pertusi.

Tell that to the family of Vincent (Vince) Foster.


THE EVENTS SURROUNDING THE DEATH OF VINCENT FOSTER

On July 20, 1993, six months to the day after Bill Clinton took office as President of the United States, the White House Deputy Council, Vincent Foster, told his secretary Deborah Gorham, "I'll be right back". He then walked out of his office, after offering his co-worker Linda Tripp, the leftover M&Ms from his lunch tray.

That was the last time Vincent Foster was seen alive.

This is a key point. The White House is the most secure private residence in the world, equipped with a sophisticated entry control system and video surveillance system installed by the Mitre Corporation. Yet no record exists that Vincent Foster left the White House under his own power on July 20th, 1993. No video of him exiting the building exists. No logbook entry shows he checked out of the White House.

The Supicious death of Vince Foster