posted on Oct, 30 2013 @ 01:08 AM
link
I found this article linked from Jeff Rense: Call me ignorant for I always thought Reptilians were lore from some UFO book or a discussion by David Icke... It would appear the pesky buggars made the news back in 1934... The article actually has a copy from two news papers from the time period along with a supposed underground map.
I am not into Reptilians unless they land and as me if I would like to take a joy ride in their saucer but I do realize there are those @ ATS who might want to see this article.. Enjoy!


Below are two extracts from the LA Times of 29 January 1934 (from the days before we had so much censorship of news) in the first of which reporter Jean Bosquet details the incredible story of G. Warren Shufelt, a mining engineer, who had been told of the underground city and its treasures by a wise old Indian, had consequently located it via ‘radio X-ray’ and was currently sinking shafts into the ground to reach it.

According to the legend as imparted to Shufelt by Macklin, the radio X-ray has revealed the location of one of three lost cities on the Pacific Coast, the local one having been dug by the Lizzard People after the “great catastrophe” which occurred about 5000 years ago. This legendary catastrophe was in the form of a huge tongue of fire which “came out of the Southwest, destroying all life in its path,” the path being “several hundred miles wide.” The city underground was dug as a means of escaping future fires.

The lost city, dug with powerful chemicals by the Lizard People instead of pick and shovel, was drained into the ocean, where its tunnels began, according to the legend. The tide passing daily in and out of the lower tunnel portals and forcing air into the upper tunnels, provided ventilation and “cleansed and sanitized the lower tunnels,” the legend states.

My personal opinion was someone was trying to sell news papers of the Los Angeles Times.... or Mr. G. Warren Shufelt, the mining engineer wanted to sell his radio frequency X-ray box... Just my take on the whole thing.

posted on Oct, 30 2013 @ 01:28 AM
link
This is a blowup of supposed radiation from Fukushima flowing around in the ocean.

How does that radiation reach all the way into Nevada and Idaho from Los Angeles?

There are sub bases in Nevada and Idaho, and at these sub bases they have submarines... which they use. Underwater. Take it or leave it. 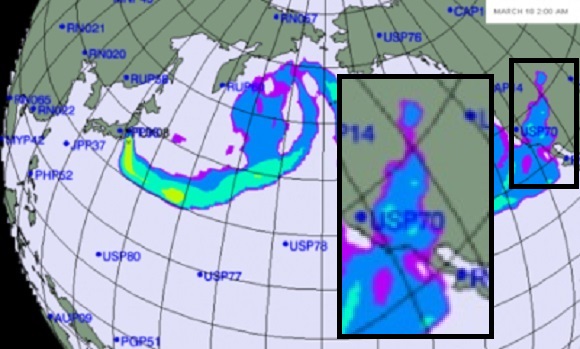 
Umm, the notion of a reptilian race is as old as written history and pre-dates to mythological folklore. From the Chinese culture, all the way to the Mayans and Aztec. Why is it that nearly every ancient civilization has artwork of serpent Gods?

Care to provide where you got those 'radiation' images from- supposedly from within Nevada?

Care to provide where you got those 'radiation' images from- supposedly from within Nevada?

Yeah. I got it on an ATS forum thread. That thread had a link. Find it if you want, personally, I'm skeptical.

The only thing that intrigued me about the image was that it seemed that this alleged radiation, which seems like it should just stay in the water seems to be creeping up on what most people would consider 'land'. I happen to believe that there are caverns underneath most of the western US, some natural, some man made, and maybe even some other-than-man-made.

Before dreams of it paved with gold, it was a burial site.

ery little grass grows on Ft. Moore Hill, site of the city's first non-Catholic graveyard. Atop it, instead, is the office complex of the Los Angeles Unified School District.

The 10-acre site across the freeway from the rising Our Lady of the Angels Cathedral has been devoted to educating Angelenos for nearly 120 years, but in the decades before, the hill served many purposes, including funereal ones.

The site was a bare wilderness in 1847 when the Mexican War turned it into a lookout post for the fledgling pueblo. It soon had a name: Ft. Moore, for Army Capt. Benjamin Moore, who the year before had taken a lance through the heart in battle.

The hill soon turned to civilian purpose, and over 30 years served as an execution spot, a posh neighborhood and the site of a school.

But first it was a burying ground.

The first bodies committed to the ground there were those of four soldiers killed in late 1847 when a powder magazine exploded. Later rumors, however, held that the pueblo had buried dead Native Americans by tossing their bodies into the steep ravine that ran along Temple Street at the foot of the hill. Perhaps that inspired the Spanish name for the place--Canada de Los Muertos (Ravine of the Dead).

Then it seemed that "myth" then followed, as I assume it was to keep people from going there, as there were some peculiar associations that then stayed there for a while.

The city took control and hired a sexton. Soon portions were sold to the pueblo's benevolent associations, such as the Masons and Odd Fellows. One corner was designated for Chinese burials.

In the 1870s, a local physician who observed a "peculiar haze" rising from the cemetery imaginatively blamed the graveyard for a scarlet fever epidemic.... until exactly 50 years later.


Here are some more clippings, and this one I added due to the important part blurred, and not readable.

posted on Oct, 30 2013 @ 02:03 AM
link
Never understood everyone linking David Icke with reptilians.

Its a historical subject long before David Icke was born.

posted on Oct, 30 2013 @ 07:06 PM
link
Found this broadcast of Coast to Coast am. Reptilian Humanoids The Secret Underground Empire with John Roche?

posted on Nov, 4 2013 @ 11:21 PM
link
Just wanted to say thanks for this thread as these articles are always fun to read


Thanks for posting this. I had seen this some time ago and it was good to read again.

Makes you wonder what may be down there from a previous age.