Ancient Aliens any opinions other then mine?

I wish to start off with a program called ancient aliens they have a good program, but there are a lot of mistakes. I've done a lot of research over the last 20 or so years and not everything is goes to ancient aliens as the cause of something happening. Win talking about Puma Pumku they say it is possible that aliens it in the past two of their air ships and blew up Puma Pumku. I can think of no other reason other than thousands and thousands of men and women tearing up a building that had to have been built within hundreds of years.

All am only an amateur at all of this. But I do have opinions that come from years and years of research. I do not have documents stating that I am worth the having an opinion. And most people will probably say that a handful of crap. And I do respect their feelings.

The show must go on so they come up with these Absolutely weird opinions stating ancient aliens had to have a hand in what ever happen.

Know what speak about the Baghdad battery. I believe that people were just as smart as we are today. Trying to come up with new ideas on how to make life easier they were bound to run into things that will weigh above their comprehension.

Now we have the fact of all of the radiation found In ancient India. How could that have happened, well there are several ways, asteroids coming in and I am sure that the all of the people here on ATS can help me figure out other ways of it happening.

I guess for now this is enough of my ranting. I will continue to watch the show and I will continue to shake my head back and forth every time I hear something as ridiculous as it could happen from ancient aliens coming down to earth and blowing things up.

One more comment there are a lot of things that ancient aliens do talk about that makes sense. This is why I will continue to watch this show

Go to the link above and either watch the whole video, or the segments on each topic.
I'm fairly certain you'll find the information quite informative.

Of course, fair warning, you'll probably see and hear stuff you don't want to hear if you've already made your mind up and "Want To Believe" so badly you're closed off to any alternative but 'Aliens'.


Thank you so much I will definitely go there and check out the video. I have an open mind to all things. So nothing would disappoint me.


People might find this strange, but I've looked into it
a fair bit, and I don't find any of it credible.. it's
kinda too bad.. would be very cool..

Anytime I think they've finally got something.. it's
always de-bunkable.

And my super shaman powers sense many things..
but no sneaky ancient aliens.. nothing closer than
800 light years or so... and certainly nothing around
young hot blue stars... nothing in particular with
orion or the peleides or any of those
'places'. Maybe they have Klingon cloaking devices
*eye roll*.

Anyway.. long and the short of it.. mark me down
for 99% skeptical on this subject. I'm an easter
bunny who doesn't believe in Santa Claus.

Puma Punku was obliterated before Tiawanaku was built.

It Probably had something to do with this: 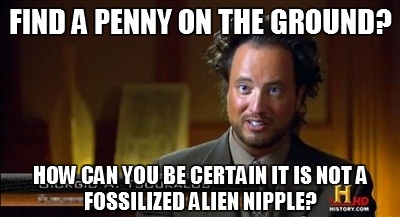 I watch the show but for entertainment purposes only and mainly just as background noise while I surf the web.

GoldenBrain71
My wife and I call this guy captain hair.

I watch the show but for entertainment purposes only and mainly just as background noise while I surf the web.


We call him Mister Hair, and he's the entire reason
I watch the show now. Just look what a degree in
sports journalism can do for your career!

GoldenBrain71
My wife and I call this guy captain hair.

I hear ya, hasn't anyone introduced this dude to a brush or comb lol sorry, I hate making fun of people but really!!!

Bwaaaahahahaha!!! That was fun, thanks! The guy who pops in at 1:50 or so in the video is another favorite character to mock. Every time he talks my wife and I break into a captain kirk like voice to mimic this guy. Awesome stuff fo sho!

posted on Oct, 29 2013 @ 01:25 AM
link
Well Ancient Aliens is an entertainment program in the same league as wrestling, roller derby, possum hiding and the ever popular wacking oak trees with oars....actually the one with the oars and oak trees is a bit more scientific
edit on 29/10/13 by Hanslune because: (no reason given)


That must be Childress lol - he is some koind of special

I do find the series interesting the first 2 seasons, but then they just lost it sadly, because it was interesting, and almost believable.

Hanslune
Well Ancient Aliens is an entertainment program in the same league as wrestling, roller derby, possum hiding and the ever popular wacking oak trees with oars....actually the one with the oars and oak trees is a bit more scientific
edit on 29/10/13 by Hanslune because: (no reason given)

I prefer American Hoggers actually. The fact that they have to subtitle 'daddy'
due to his ridiculous fake accent sends me into hysterics.


That must be Childress lol - he is some koind of special

I do find the series interesting the first 2 seasons, but then they just lost it sadly, because it was interesting, and almost believable.

Ok... must admit... I like him better than Honey Boo Boo.
And I never quite realized .. he does sound like Skippy
Kirk.

posted on Oct, 29 2013 @ 01:37 AM
link
My personal opinion is that you are totally right about what you said about Puma Punku and the Baghdad battery, but Aliens have really been coming to Earth for a long time. Far longer than we have been around for. It's an inhabitable planet; a big ball of rock full of all sorts of resources that would be of interest to many different races. I mean we're interested in and have uses for many of these different types of resources, why wouldn't other species of intelligent being also be?
Yeah there are other places to get some of these resources, like large asteroids and such, but wouldn't you much rather mine rocks in an area that you can actually breath and live naturally without any artificial support keeping you alive? At least I sure would.


The father cares for his children, helps them survive and learn.

Show them what it is to become more then what they dreamed.

setting off to let there children learn create and grow on there own.

never straying to far from them incase of emergencies.

and to one day visit, to be proud of the ones they called there children.

and watch them as they spread love and beauty of creation further into the minds and hearts of the universe.


Hi. I am an AA-Theorist as well , and I am off course watching the Ancient Aliens series too. The AA-theory itself should be rather basic, but over time quite a lot of sub-topics related to the AA-theory has been adopted, thus sadly making room for new critics.

If I was the one who could decide I would perhaps choose to return to the basics, and leave sub-topics like time travelling and corn circles and such stuff alone. However, a TV series has to be different from debating these things or writing a book about it, because series on TV have to be popular in order to keep the audience watching. Thus the TV series are stretching the theory to it’s limits and all kind of strange views are (in my opinion) presented. One should perhaps concentrate on the basics. However. If this series would encourage people to check this theory out and seek information for themselves, the series does have a purpose.

I agree with you that the Puma Punku site was definitely an ancient alien site. It was of course not bombed to pieces by the aliens like you say. However since there exist no written history of this site and no evidence other then what’s on the site itself, one has to come up with theories.

My personal theory about this site is that the stone elements that are scattered around this site are pieces of a large mold or molds. Thus this site could have been an alien factory producing alien tech parts or something like that. That could perhaps explain why the elements are scattered around, as they served no purpose immediately afterwards. The site then seems to me to have been left in a hurry (for some reasons).

Have you by the way taken a look a the 3D pictures of the different stone elements lying there. These 3D pictures are amazing. I have downloaded them to my PC myself, and have thus studied them. It is beyond amazing how someone could shape stones like this.

If you want to study some of those stone elements in 3D for yourself, please follow this link.

The person that has made those 3D images of these elements also give us a chance to download them. Just scroll down the page and click on the external link called 3D Models and start downloading to your PC. The file contains images of 32 stone elements and 2 platforms. The images have DWG file extension, and requires a DWG-Viewer, a software which can be googled and downloaded for free.


Actually I have a very nuanced view about "Ancient Beings"
but they weren't physical beings, nor anything resembling
anything that people on this forum post about. but that
is a topic for another day. That's my reason for saying
I don't buy it 99%. There is that 1% I'm interested in
and researching.

posted on Oct, 29 2013 @ 01:53 AM
link
Ok, this thread is turning into a hate this guy thread, not what I was hoping for. I just wanted to know how many people believed in his sayings and how many did not. I have my answer now and I thank you all.

Also I am very sorry for contributing to the hate of Giorgio Tsoukalos hair.

But as far as aliens visiting us. How can we explain away a video such as:


This is my first time embeding a youtube vid into a thread so in case it didn't work there is the link:
www.youtube.com...

Nothing that we (USA) or other governments have that can move like that. This is definite proof to me at least that they are here and interested in us, or at least our planet.

Any comments on this video.

I am heading to bed soon. So I may not reply till tomorrow. Usually evenings.


I think it's funny how all the "ancient alien theorists" on this show are so well coordinated and validate each other. They almost seem to finish each others sentences, as if speaking from the same script, even though it looks like they are being interviewed at different times and from different locations. They are probably all in one large sound stage with several areas decorated to look like rooms from different houses.

Even though it's completely absurd I can't stop watching the train wreck.