Obama admin. knew millions could not keep their health insurance

President Obama repeatedly assured Americans that after the Affordable Care Act became law, people who liked their health insurance would be able to keep it. But millions of Americans are getting or are about to get cancellation letters for their health insurance under Obamacare, say experts, and the Obama administration has known that for at least three years.

Ok, the shocking part to me is that NBC actually published that story. So, now that the obvious is being spoken by the MSM, what happens next? I'd like to think that this mess of a law will eventually be removed and some actual, workable, healthcare reform can be enacted. Before anyone asks me what that is, I don't know. But I know that the only people the ACA seems to work for are the insurance companies

I did a search, didn't see this posted, apologies if it has been already.

None of this should come as a shock to the Obama administration. The law states that policies in effect as of March 23, 2010 will be “grandfathered,” meaning consumers can keep those policies even though they don’t meet requirements of the new health care law. But the Department of Health and Human Services then wrote regulations that narrowed that provision, by saying that if any part of a policy was significantly changed since that date -- the deductible, co-pay, or benefits, for example -- the policy would not be grandfathered.

Buried in Obamacare regulations from July 2010 is an estimate that because of normal turnover in the individual insurance market, “40 to 67 percent” of customers will not be able to keep their policy. And because many policies will have been changed since the key date, “the percentage of individual market policies losing grandfather status in a given year exceeds the 40 to 67 percent range.”


It looks like the law itself says one thing.

And the law apparently also allows for *interpretations* and *adjustments* by HHS, and are called *regulations*.

Obviously they knew all about it.

The possibility that a President has information withheld by his own people and they allow him to lie,

or, a President that has the correct information and continues to lie.

How will Obama supporters explain this ?

I feel sorry (but only a little).


Those unusual few that think the ACA is the end-all be-all will be along shortly to tell us why we're morons and how NBC is a far right rag.

Whatever he says-always expect the opposite.


You cant take anything he says at face value.


This bill was designed as a Trojan Horse to both pry insurance out of the range of benefits offered by employers (ironic since it was Democrat policies that started the practice in the first place) and destroy the private health insurance market. You can find this goal stated over and over by the bill's progressive backers with a little searching.

They got the big insurance companies to sign on by offering them the promise of a forced customer pool, but in reality they won't be able to make it work because the bill itself is more or less fascist in nature with the government standing behind the companies and basically dictating pretty much every facet of how they must do business from how the policies must be written, to what must in the coverage, to even how the profits realized must be allocated by the companies. It all adds up to unsustainable over the long haul. The only ones who will get rich out of this are the very ones at the very top if that.

The thing is that this was supposed to be a long, slow, managed collapse of a decade or so, and this thing is coming apart in matter of months. In the end that might be what saves us. We were supposed to have enough time under the new system to forget that government broke the bad system we had making it infinitely worse, and we were supposed to forget who was standing behind the curtain running it all already and hate the name on our letterhead instead (Blue Cross, Aetna, etc.), so that when it finally got really, really bad, we'd all be ready for the government come in and "fix" a problem we'd all forgotten they pretty much made in the first place.

He didn't know anything.

If you like your President ... You can keep him. 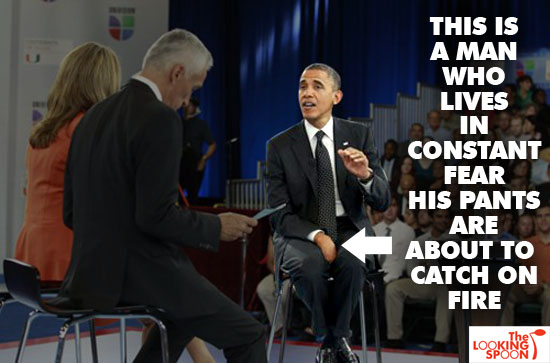 
I agree. It's coming apart at an amazingly fast clip, and there's no way they wanted that. It's so fast that we can't help but remember who's fingerprints are all over it.

posted on Oct, 28 2013 @ 08:19 PM
link
Once the private insurance industry is destroyed, the government will give a "bailout" which will actually be a buyout.

Then the government will be the only entity able to cover the cost of health care.
All health care will be nationalized shortly after.

Only party members will be covered by the prime services.

The rest of the serfs will receive health care according to their needs as specified by the ruling party.

Everything else I can see happening is much worse.


You're a right ray of sunshine, aren't ya? Unfortunately you're probably right, we'll end up with some sub-par healthcare while the ruling class of politicos has that same "platinum" healthcare plan they derided through 2009.


Even so, the people will remember just exactly who screwed them over and how. The other way, they'd imagine the ones who sold them out were really saving them. I prefer the first; that can be worked with.

posted on Oct, 28 2013 @ 08:39 PM
link
Once they finish shoving this grand "law" down the throats of the taxpayers, the great barry the liar will force immigration reform on us which WILL add 11 to 20+ million to the list, anchor babies galore with the gates wide open: free everything for everyone, no limit, it is all paid for.......


Well, I know that's the plan. I'm hoping the blowback from the ACA debacle will kill the immigration reform bill before it even starts.

First, how many tens of thousands of paper pushers will be jobless? How over stressed will the Medicaid/Medicare programs become? Will they also implode? What of the 11million new (currently illegal) citizens BOTH parties WANT to add into the mix? AMERICA is being dismantled before our eyes.

Personally, my families (thru husband's work) insurance plan is changing. Higher cost per month, higher copays; bigger deductible. I don't know how we can afford it. My hours have been dramatically cut as keeping me as part time (adding another employee to share my hours--more beneficial to have two 18 hr per week employees than one 38 hr per week employee). My situation is NOT unique.

This IS a conspiracy site (I hope I'm amongst like minded cyber friends) but I do believe this Clusterfug was PLANNED...but NOT to occur so quickly (and I also believe that some Cyber Guardian Angles PURPOSEFULLY wrote gazillions of miles of bad code). If NOT for the cyber issues, would we be at this point with the Obama intentions SO CLEAR now to all? IMO we are watching EITHER the last stand of the US or the rebirth of what used to be an independent people who TAKE CARE of themselves.

posted on Oct, 28 2013 @ 08:50 PM
link
I'm really not trying to be a gloom and doom type.
I'm just calling it as I see it.
The agenda is overwhelming and far reaching.
Most Americans will continue to support it as well...even the ones who know it's ultimately economic suicide.


Mainly because right now hard working people still have a slim chance of improving their situation.
Most Americans are getting a handout from Uncle Sam now and are well past the willingness to work for anything more.

They would rather screw everyone and prevent anyone from being able to work hard and do a little better.

posted on Oct, 28 2013 @ 08:54 PM
link
This is why we have a Constitution. It delineates the responsibilities of the federal government and forbids them to step beyond it. May not seem fair to some, after all not being guaranteed health care and all, but in fact health care to the degree that technology (and expense) takes it these days is not sustainable. There is no end to what the industry can expend on health care and at some point something breaks. It's just not a federal government thing. They need to stay within their arena.


As nor giving a rats rear what most think, I will tell you what is next after the crash of healthcare and the rest. The great Barry the god himself will declare himself king of the USSA, and moochele shall be queen. His army will fight for the throne and the whole demoncrap senate will be his crew, all constitutional patriots will be deemed terrorist and shot on site. The new god will dictate all policies from cradle to grave and do not dare step out of line nor question anything. Tell me this liar would never do such........fundamentally transform america.....


Under THIS Administration the US Constitution has become meaningless. In ObamaCare alone, the delay of the Employer Mandate; ALL of the "carve outs" the "exceptions" FROM having to participate; even the recent extension til March 31, 2014...under what Rule of Law were there actions taken? There IS nothing actually in ObamaCare that allows any adjustments, but non the less qualifications have been made.

How many OTHER laws (think of our porous southern border, the use of the IRS as the personal bully of the DNC, Fast and Furious (now with illicit grenades!) HAVE BEEN OVERLOOKED, NOT ENFORCED to support Obama's agenda?

No...our Constitution is meaningless to this Administration.

posted on Oct, 28 2013 @ 09:41 PM
link
What I find disgusting is that anyone who makes under 9,750.00 dollars a year and people who are disabled will not get coverage at all. Just because you are disabled you are not automatically covered under medicaid.

That is correct as I had a drug company, Johnson and Johnson to be exact sent me a letter informing me that since they provide my thousand dollar a month script for me in an assistance program, if I qualified for Obamacare then they would no longer help me but since I am exempt do to my disability then they will (MAYBE)!

Obama lies daily. This health care fiasco of his should be an automatic impeachment hearing in front of Congress ASAP without his attorneys and then the first time he says I did not know that, they need to hang him for high treason.

He is worse than ten of the worst Presidents put together. I warned all of you on ATS back in 2008 but no you all removed my threads and post for the messiah just because he wanted to campaign here. How is that change working out for you now?

A lot of people are a whole lot worse off under this thing than were bad off without it.
edit on 28-10-2013 by ketsuko because: (no reason given)