Obama Lied When He Denied Knowing About German Phone Tapping

page: 1
23
<<   2  3 >>
log in
join
share:
FlyersFan
+7 more
posted on Oct, 28 2013 @ 05:58 AM
link
The Obama administration has been spying heavily on Germany and their elected leadership. Obama, as always when caught with his hand in the cookie jar, denies that he knew it was going on. The article says that the international community will be demanding to answers from Obama as to what he knew about all the spying. All those folks were really hot for him to be elected in 2008. I wonder what they think of him now. And I hope they don't expect a straight answer from him. His pat lie-answer for everything ... "I didn't know".

US Denies Obama Aware of Spying on Merkel


President Barack Obama was dragged into the trans-Atlantic spying row after it was claimed he personally authorised the monitoring of Angela Merkel’s phone three years ago.

The president allegedly allowed US intelligence to listen to calls from the German Chancellor’s mobile phone after he was briefed on the operation by Keith Alexander, director of the National Security Agency (NSA), in 2010.

Citing leaked US intelligence documents, it also reported that America conducted eavesdropping operations on the German government from a listening post at its embassy beside the Brandenburg Gate in Berlin, one of more than 80 such centres worldwide.

Obama claims to know nothing about IRS-gate, Benghazi-gate, and Fast and Furious


I don’t know about you, but the mantra being spouted by President Obama and his administration officials is wearing a little thin. The latest is what they are saying about the IRS targeting conservative groups for intense scrutiny before they were granted or denied their tax exempt status from the IRS. If we are to believe President Obama, he knew nothing of the actions taken by the IRS and is totally outraged. Just as he knew nothing of what took place in the Fast and Furious operation and what actually went down in Benghazi that resulted in the deaths of four Americans.

Obama claimed not to know about Patraeus situation

The Pres is just a mouth piece for the government's public facing information portal. He says whatever they want to make you think what they want you to think.

Im not remotely surprised by any of it!


The latest claim, reported in the German newspaper Bild am Sonntag, followed reports in Der Spiegel that the surveillance of Mrs Merkel’s phone began as long ago as 2002, when she was still the opposition leader, three years before being elected Chancellor. That monitoring only ended in the weeks before Mr Obama visited Berlin in June this year, the magazine added.

I forgot Obama can time travel.

All you crazy nutcase conspiracy theorists... Nobody lies. Especially nobody in politics.

I call to put, all threads claiming the the Governments lie, in the HOAX bin promptly.

Remember all those Berliners cheering for him like he was David Hasselhoff or Michael Jackson.

Between the spying America is doing and the Drone Warfare, is he trying to break George Bush popularity records? He's doing a good job at it!

most if not all senior politician in any country are a bunch of liars, crooks and political snake oil salesmen.

Biigs
Are you under some misconception that Presidents dont or cant lie?


WHERE on earth did you get that idea? OF COURSE presidents lie. And this one is no different.
Are you under some misconception that we can't talk about how the presidents lie?
This is a discussion forum ... and we'll talk about it.

Obama lied. Again.
And Obama claimed 'I didn't know about it'. Again.
How's that for 'hope and change'??

buster2010
Obama was President in 2002?
I forgot Obama can time travel.


Don't be obtuse. It's silly. The spying started in 2002. It continued in the Obama years with your buddy Obama approving it again during his presidency. Now he claims he knew nothing about it. But that's a out and out lie .... so much for transparency ... so much for 'hope and change' ....
edit on 10/28/2013 by FlyersFan because: (no reason given)

TSOM87
I wonder if Obama will ever get the sort of reception he got in Berlin way back in 2009 ever again?


That's the thing that keeps coming to mind. Obama going to Berlin and getting the rock star treatment. Those people were drooling over him and going insane with glee and applause in massive crowds. It was frightening to see that ... especially given Germany's history with really bad politicians rising in power. They LUV'd him. I'm willing to bet that they have finally taken the rose colored glasses off and discovered that Obama is just like the rest of the world politicians ... corruption and lies and all the rest of the nasty things that go with politicians high in power.

posted on Oct, 28 2013 @ 07:13 AM
link
To lie is to intentionally deceive: A lesson in morality - something which our nation as a whole has abandoned - This is for morally upright persons to know and to understand - all others are incapable of knowing the value of truth and therefore of truthfulness. For example, would you lie to, or in the face of your own children? If so then you're no better than the president and those who follow him this way - totally and completely without moral standing. They will eventually disrespect you for deceiving them!!!

There are six things that the Lord hates, seven that are an abomination to him: haughty eyes, a lying tongue, and hands that shed innocent blood, a heart that devises wicked plans, feet that make haste to run to evil, a false witness who breathes out lies, and one who sows discord among brothers. Proverbs 6:16-19

God is truth. He abhors lying. The devil is the father of lies.


The truthful lip shall be established forever, but a lying tongue is but for a moment. (Proverbs 12:19)

Blessed are you when they revile and persecute you, and say all kinds of evil against you falsely for My sake. (Matthew 5:11)

Therefore, putting away lying, "Let each one of you speak truth with his neighbor." for we are members of one another. (Ephesians 4:25)

But the cowardly, unbelieving, abominable, murderers, sexually immoral, sorcerers, idolaters, and all liars shall have their part in the lake which burns with fire and brimstone, which is the second death. (Revelation 21:8)

posted on Oct, 28 2013 @ 07:14 AM
link
This just goes to show what our own government thinks of publicly stated positions ect. Something we should keep in mind when politicians publically run their mouths.

At that its hard to believe that heads of state don't have secure communications. Even private phones. They should watch more "Sopranos" episodes if they use public communications systems.
edit on 28-10-2013 by Logarock because: n


I am not bashing christianity in general but must say there have been more than a few well known ministers and ministries that have employed the services of phone tappers and the like for one reason or another. Its not just the government. Our society is ate up with this. That's one reason there is not a large outcry over the government doing it with the sort of finger tip ease they do it. In every large city and elsewhere, if you have the money, for whatever reason required, you can hire a "plumber".


I was listening to CSPAN radio this morning and there were a bunch of callers calling up about this spying on foreign allies scandal. Just about every person who called up was defending the practice, citing reasons such as spying has existed since the dawn of civilization. Somehow, these people got it into their heads that just because everyone is doing, makes it right. Sad times we are living in now...


The thread is addressing the lies and deceitfulness of the president - I addressed the facts of his lack of moral standing. His immoral actions lie within the greater context of American life, and are obviously reflective of - indicative of the great moral failing and general malaise of this entire nation - of American culture generally, not to mention the rest of the world.

posted on Oct, 28 2013 @ 07:39 AM
link
I don't really know why Obama lying to the German Chancellor should be a great issue; He's lied to the American people consistently for over five years...and nobody holds him to account.

'Oh yeah, we've been illegally spying on everybody for years.'

It's international politics, everybody is spying on everybody all the time.

IAMTAT
I don't really know why Obama lying to the German Chancellor should be a great issue; He's lied to the American people consistently for over five years...and nobody holds him to account.

Are you intentionally ignoring the points I have been making as regards BHO's total lack of moral character? Nowhere have I isolated his lies to and about Merkel from the general context of his lack of moral standing.

What a hypocrite he is as we see him often hand in hand with Angela, broad smiles and all - while all the while he's sticking a weenie up her nice rotund behind. What a weasel. Don't think for a minute that this goes un-noticed by all the other leaders of the world - BHO has ZERO CRED with all of them!! 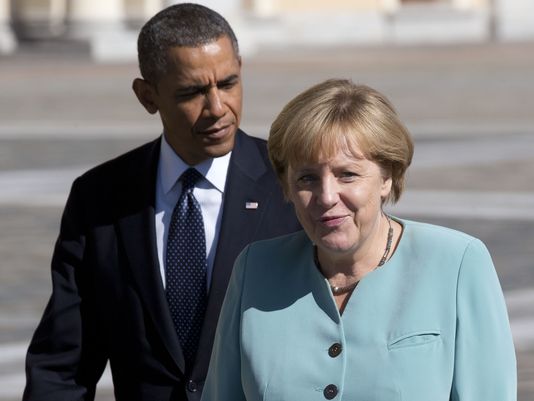 Look at the look on his deceitful face and what's he doing with his left hand?

Ohhhhh I nearly forgot - according to many of the pundits here in the thread - they do it to each other all time right? I doubt it very much. You're gonna tell me that AM has BHO's cell phone tapped? NO WAY JOSE!!!

BTW - has anyone here begun to imagine the kinds of personal calls that AM might have made on the BHO tapped cell-phone? Pretty damned intrusive if you ask me.
edit on 28-10-2013 by XionZap because: (no reason given)

You have been Rick Rolled