posted on Oct, 27 2013 @ 03:11 PM
link
This was in the newspaper yesterday, October 26. It appears the police will have to turn over the cell phone records of the officer involved, who claims the window was fogged up. Isn't it refreshing to hear news of a citizen taking a stand against people in positions of power acting irresponsibly? They are not above reproach. 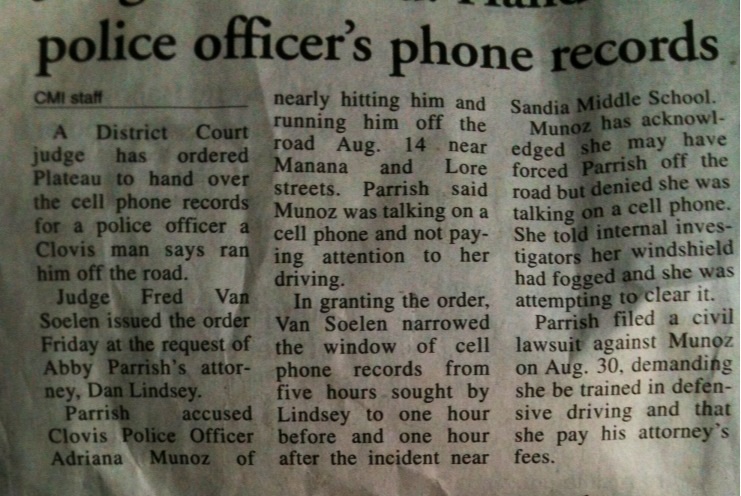 posted on Oct, 27 2013 @ 03:39 PM
link
There was a case in the uk a while back where a woman killed a cyclist when she ran into him. She tried to say the sun blinded her and therefore couldn't see the cyclist. The judge wouldn't have any of her bull crap and found her guilty because if she was blinded by the sun then she should have stopped. Its the same in the case OP mentions, if her screen was misted she should have stopped.


What I like about this guy, is he keeps the legal case simple and to the point - he wants the police officer to be trained in defensive driving techniques and pay his court fees for the case. It is a very polite, concise and just case. If I was the police officer, I would not feel bad about this or hold a grudge.

I am currently dealing with a similar situation involving police, and in my opinion, you need to strike back just the perfect amount to deal with the situation, defend your rights, possibly improve the department's standards and make it look reasonable and professional.


Guilty of being a road hazard I agree.
Now with her phone records we can see if she perjured herself and needs to do some time too.
We need to hold everybody to the same standards if we are to advance as a civilized society.

posted on Oct, 27 2013 @ 05:33 PM
link
I'd be very happy if they took those phones away from them entirely! I've been listening to police scanners locally and for events for quite some time now and it's absolutely maddening. They use air channels for the most boring and routine parts of any call and then 'call me' or the 10- code for direct phone communication to move off the air .....and away from public ears.

I fully understand that when it comes to tactical channels for undercover work or other sensitive things. They don't need every bad guy with a trunk tracker, sitting there listening for the Calvary to come their way.

That's a small small % of what they go 'cell' for now...and when they start running people right off the road? Well.. HEY! Wait a minute!! The fines and penalties for mortal humans to drive with a cell phone to the ear are ridiculous. More so for truckers who ARE trained drivers, just like cops. Why do they get the exception on anything but the clearest emergency reasons??
edit on 27-10-2013 by Wrabbit2000 because: (no reason given)


Yes, he wants court costs and defensive driving for the officer. I feel it is good on the plaintiff and good on the representation. As well as the Clovis News Journal for reporting. Thanks all, for reading.

kkrattiger
This was in the newspaper yesterday, October 26. It appears the police will have to turn over the cell phone records of the officer involved, who claims the window was fogged up. Isn't it refreshing to hear news of a citizen taking a stand against people in positions of power acting irresponsibly? They are not above reproach.

I must update this thread as the Sunday paper came out with a front-page article wherein the officer addresses the situation. It does cast a different light upon the motives involved, at least concerning the attorney. It appears the citizen may be being "taken for a ride" in that a frivolous suit normally wouldn't be taken up by an attorney with respectable professional standards but in this case, either those standards are nil, the attorney has an agenda; the attorney wants to make statement WITH the citizen in amending practices involving complaints about police driving/how complaints are handled; or some other scenario playing out.

Also goes to show, one must not judge so quickly, as I did in the initial thread post.

I can see the officer's perspective.

I'm interested in what the end of article mentions: the many complaints about the officer's driving. I wonder if that's just hot air coming from attorney. It looks as if the phone records did not deliver the proof the attorney & client were looking for, as they've called it a "cover-up".