Strange lights over Quebec, Canada filmed from a highway

posted on Oct, 27 2013 @ 09:52 AM
link
Could these be planes stacked up for approach and landing at the airport, with their landing lights on?
The road sign seen at the 2:45 mark says that the car is heading in the direction of the airport.

From the video, they could be almost anything.

I guess technically they qualify as unidentified FO"s.


There was a huge pro-side demonstration in Quebec yesterday about the proposed charter of values. Could these not be helicopters just monitoring the scene during and afterward?

That was my first impression anyway, especially as they seem to be reflecting light from the city below.
edit on 27-10-2013 by aboutface because: (no reason given)


Looks like that to me as well. And with the airport in that direction, it makes perfect sense.

posted on Oct, 27 2013 @ 07:36 PM
link
Landing lights and amazing how many people get fooled by aircraft stacked up on approach. They fail to understand the distance that the lights can be seen and hence this type of footage. The following from Chicago when aircraft were stacked up over the lakes on approach to O'Hare. Obviously some people will never be convinced or able to comprehend what they are viewing.


Landing lights maybe, but the sign is an indicator for the highway to take to mirabel which is some ways off (61 kms), and they would not be stacked up for an approach in St.Roch d'achigan. The driver keeps saying that they are stationary, and his wife is the one who is filming. There have been several reports in the area in the last few weeks, enough for a story to be printed in the provincial rag last week "Le Journal de Montreal"(you can do your own research on that one). As for drones, the ones ones we use here during mass assemblies are quite small, like a toned down bell 222, and they have rather bright nav lights but not landing approach lights.

Could be military maneuvers, they do use a lot of choppers in that part of the province, or search and rescue looking for lost hunters, but the locals are usually quite savy when it comes to that. It is easy to blow off people's observations, but to assume because an airport indicator sign is in the shot, that there is the same kind of traffic you would see around Ohare or indianapolis is a bit premature.

It would have been better if he had stopped the car and maybe zoomed in a bit, taken a few stills, which to me indicates he himself doesn't believe entirely in the idea that what they are seeing is special.

The following is the original upload. In the video description it states that where it was filmed from - Autoroute 25 heading south near Saint-Roch-de-l'Achigan on 2nd October 2013.

From Flight Radar 24 the following shows the flight pattern for Montréal–Pierre Elliott Trudeau International Airport. The flight pattern on the 2nd October has the aircraft extending up approximately 12 miles from the the camera person in the car before they make the turn for finals. If the aircraft are heading towards the camera the lights can appear to hang on the downwind section. It is simply an illusion caused by the distance.

The flight pattern snapshot from the 2nd October. 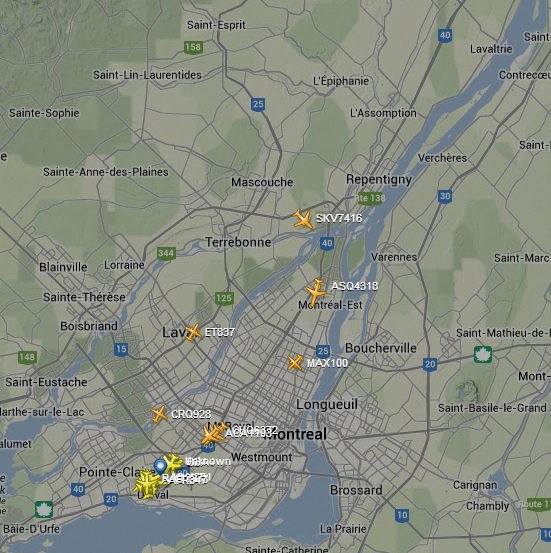 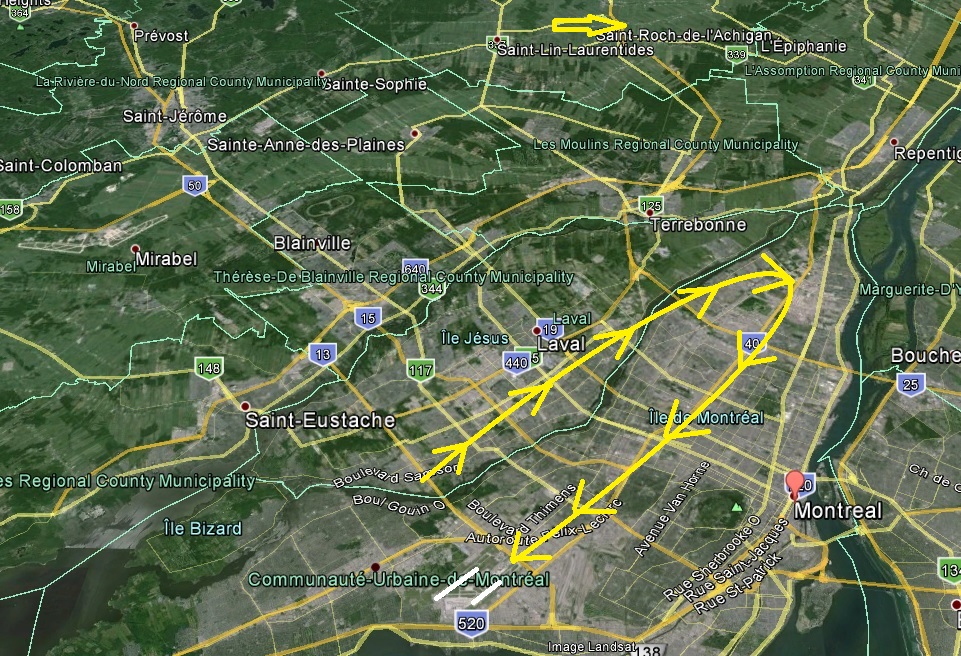 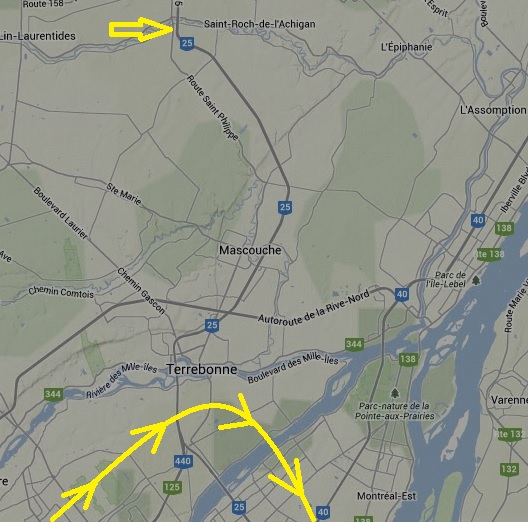 tommyjo
...If the aircraft are heading towards the camera the lights can appear to hang on the downwind section. It is simply an illusion caused by the distance...

Right. I have seen aircraft on approach that appear to hang motionless (and then appear to move very slowly) for 5 minutes or more at a time. In addition, the witness was in a moving car, so apparent motion (or lack thereof) of aircraft would be difficult to discern.

posted on Oct, 28 2013 @ 01:33 PM
link
Looks like landing lights to me too. When I go for a smoke I often have a wonder to somewhere where I can just about see the London skyline sometimes the sky is lit up with aircraft lights stacking for heathrow