Psychological Weapons - Something to Consider.

'In days of old, when men were bold and trouble came up river...
Women feared while children teared and all were known to shiver.'

That would be an apt description for a period of time across Europe when the Norse or Viking Raiders roamed and pillaged at will. The Vikings were a fierce and brutally effective group of people when on offensive raids. They hit fast, hard and with little or no mercy offered anyone, anywhere in the area they struck. What they didn't use many times, was surprise. Surprise would have robbed them of a crucial weapon that made a great difference.

This can come in many forms and we must remember, these Raids were against everything from Monasteries to whole towns. They were also, again, effective. Why?

The longboat is a recognized symbol of the Viking age and, as with so much of Viking warfare, its effectiveness was psychological as well as physical. Just the sight of a huge Viking longboat, full of chanting warriors, shields hung menacingly along the sides of the ship could cause fear and panic. The longboat was often decorated with a fearsome carved face at its head.

We can see some idea of that in the above passage, but it doesn't cover all of it. Thanks to some quality time in history courses, I've come to learn an important detail that allowed the numerically inferior Vikings to rampage, largely unchallenged, across Europe from the coasts to deep interior locations by river. 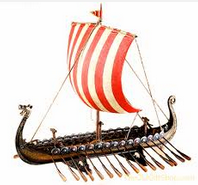 Rather than sneak up and spring a surprise, they boldly sailed the rivers in full view and glory, as visible as they could make themselves...because their reputation proceeded them. Even if the settlement being approaching MAY have been able to fight and win, that chance could well have been lost by the mental impact of fear and what it did to the will to fight.

So.. The Vikings kicked butt with head games. Has this been used before in the distant past? Well...Of course it has. Deliberately and very much by design. Alexander The Great was a character in many ways...but he was a clever one for this.

Ancient armies had used sophisticated psychological weapons. For example would have mad armour suitable for a man of several times normal size. He would then leave a few samples laying around the scene of his victories against the Persians. After he had gone Persians would find this armour and were were soon spreading stories of Alexander's superhuman giant soldiers.

As funny as it sounds to us, recall that was a period of God(s) we now read about in mythology. A time when solving the Gordian Knot was considered a feat to show entitlement to power....(even if he did cheat, in my opinion). Elsewhere, we see this in things as clear cut and easy to win as Siege warfare, where time is literally 100% on the side of the attacker and no reason to be discouraged....they still have been.

They might throw food from the walls to show besiegers that provisions were plentiful (Dame Carcas, who saw off the Franks, supposedly gave her name to Carcassonne after feeding the last few scraps of food in the besieged city to the last pig and then tossing over the walls as a present to the Franks. As intended, they deduced that their siege was useless and raised it the next day).

The use of Psychological warfare in small and large ways alike is well documented, proven and time tested. It works and it's essential to survival in odds which don't favor you.

So how does this translate as something helpful to a modern person if faced with circumstances where these thoughts are necessary? Well, you won't be tossing dead pigs over walls, leaving over-size armor for a marching army to find or likely sailing up rivers to raid terrified villages. However, you may still find yourself in a position where showing your true self is tantamount to suicide and the head games are essential to come out in one piece.

Sun Tzu's rather well known book is helpful, but I wouldn't wish reading that on my worst enemy. So, perhaps a few points to take and ponder will suffice.

#1. Appearance and Bearing can mean everything - Or, to put it another way, the appearance of power *IS* power. It's a lesson every law enforcement officer is taught, directly or indirectly in the earliest days. They have to be. In police speak, it's called "Command Presence", among other things. It describes the bearing of authority, whether one believes in themselves or not, and whether they have it in reality or not. The APPEARANCE of power, if presented as factual in more than words, will be taken by most people at face value.

#2. People see what they expect to see - Or, hiding and appearing from plain sight works and can be shockingly effective, despite not seemingly logical. The phenomenon is perhaps best known in security camera monitoring, where good operations rotate men off screens frequently. If not, the images across the screens come to be expected, and, without major disruption to draw attention, the norm will be seen..and small things, missed. If you're moving in a group and you look similar to the rest? You'll likely be taken for the rest and ignored ...if you behave, genuinely, as if you belong naturally within that group. People see what they want and expect to see.

#3. There is no shame in weakness. There is survival. - This plays opposite to point 1 and plays to the other side of that situation. As Sun Tzu shares, if your enemy is strong, appear weak. Playing like an idiot, fool or ignorant oaf is how others come to play superior and overextend themselves. Arrogance is never something to underestimate and can by played as well as manipulated, if you're taken as someone incapable of such complex thought or cunning. The key here, in my view, is the art of being subtle. Any hint of effort, obviously, defeats the purpose and in a real situation? Game Over takes on a final meaning.

So, I hope this may give a few things to ponder. I'm no expert in these matters. I'm just a guy who has been through some things in life, learned a few lessons and try to share where I can. Some may see the above points as foolish. I've found them to work and the fact I'm here attests to that in large degree.

I'll add as a closing thought. The trick to mind games or psychological warfare is to act in total, absolute confidence displayed in what you've chosen to do. You can be shaking like a leaf in a windstorm inside ...but showing that, even a little, makes all the effort wasted.

Enjoy your day, everyone and lets hope these little nuggets of info to consider are never more than pure academic musings to pass a slow day.
edit on 25-10-2013 by Wrabbit2000 because: (no reason given)


I'll add as a closing thought. The trick to mind games or psychological warfare is to act in total, absolute confidence displayed in what you've chosen to do. You can be shaking like a leaf in a windstorm inside ...but showing that, even a little, makes all the effort wasted.

That right there is the very definition of courage in the face of battle.

Its the whole reason boxers and other fighters try to psyche out their opponent.
Half the battle is mental, the other half physical.

I always thought the Terra-cotta soldiers were probably used in some such fashion. Lining these statues up on a wall or skyline might give pause to potential invaders.

Or they were used as a ploy to influence the enemy on the battlefield. Either way, definitely PsyWarOps.

posted on Oct, 25 2013 @ 12:27 PM
link
Good thread. It is old knowledge. When someone gets mad and they start turning real red, I usually look for horns sprouting. If horns are sprouting I will walk away from an argument.

posted on Oct, 25 2013 @ 01:35 PM
link
I did some work with the PSYOPs guys here and there. It was interesting but, it was also one of those things that nobody really put to much faith in outside of them. Mainly because it is hard to truly measure the effect a PSYOPs campaign has. The big rules they had were KISS keep it simple stupid and know your audience. The first being a maxim among all types of special ops because the more complex you make something the bigger chance it could go wrong. The second because different cultures respond in different ways and have different views. What would work in Iraq may not be what would work Somalia etc. Dropping flyers to a society has low literacy rates is a waste of time for example.

There is something about the Terra-Cotta Warriors that really disturbs me and I've said this before too. I don't know what, precisely....but something absolutely makes my skin crawl with those. Disneyworld/Epcot had a China area made and staffed by Chinese which features a mock-up with some actual pieces from it. (shivers)... Maybe it's that each of the countless faces are unique as an individual from every other one. No two alike..like real people.

Whatever it is, they built that well for the psych-impact. It still carries one these many many years later, eh?
edit on 25-10-2013 by Wrabbit2000 because: (no reason given)

Maybe it's that each of the countless faces are unique as an individual from every other one. No two alike..like real people.


I don't have a link for it but I read somewhere that is one of the theories. They were patterned after real soldiers in his Army that died in his service. Immortalized...

We have no way of knowing that but is one explanation for their individuality.


Irrational fear is a force multiplier. There are others. The US is a 100yr case study in mass manipulation. Everybody gets in on it; the gov, corps, private parties with excess cash, etc. It's not only legal, it's celebrated and glorified.

I believe some of the "brain dead" behavior being observed in the US is from people reaching the saturation point.


I can't recall now if it was described by the Chinese as being men in his service or not. I do know they said the faces were patterned from actual people and each one, a different man. Spooky...

Then again, China is making all kinds of discoveries around their land for odd and weird in long term history. Who knows what else lurks there to be discovered?

Who knows what else lurks there to be discovered?

They're still digging.
About the Viking long ships. They travelled in groups and set upon coastal communities. Must have been some shock to look up from your village hamlet and see those brightly painted sails coming from the ocean straight at you.

The Nazis had a slogan they used a lot while invading...

"Everyone knows what we bring".