Not sure where the study referred to above was done, but this brilliant 12yo Jasmine Roberts of FL, studied 5 different fast food restaurants ice and compared it to their respective toilet's water (2012).

She ordered cups of ice and put them in sterile beakers. She also went into bathrooms, flushed the toilet once, and collected a sample.

The findings were pretty disturbing.

How did that happen?

The reason that the bacteria was more prevalent in the ice could be that while toilets are cleaned regularly, ice machines are not.

No wonder fast food joint sodas and drinks taste better than at home! Super-size it for extra!

posted on Oct, 24 2013 @ 09:07 PM
link
Or they are adding nutritional value to their ice now..hehe,!...fast food outlets are well known to be dirty this does not surprise me in the least,every now and again these stories come out... Partially why I stay away from these kind of places...yuk

posted on Oct, 24 2013 @ 10:54 PM
link
Ha! From what some people say, the toilet is the most sterile area in one's home. Debunkers always making it a point that the kitchen sink is worse, et cetera...
Nevertheless, I will look upon the ice machines at fast food restaurants with a slightly different attitude when I take some in the future-- my immune system will receive a light workout. 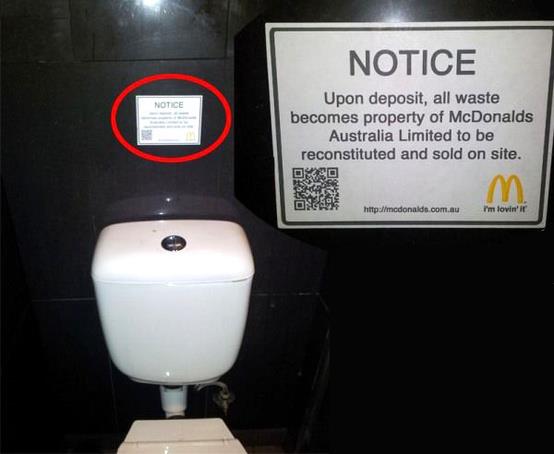 posted on Oct, 24 2013 @ 11:15 PM
link
I think any surprise at this finding shows a disregard to how a toilet actually works, and how bacteria actually works.

The cistern of a toilet is a sealed system - it is made of ceramic or stainless steel, and simply holds water that comes through the tap it's connected to. When you flush a toilet, it just drops this stored water into the bowl, and then the cistern is refilled. There is no remnant poop inside the closed system.

Further, bacteria loves stagnant (non-moving) water. Obviously, every time a toilet is flushed, the contents of the cistern are emptied, and replaced with clean, fresh, potable water. I imagine that happens a hundred times a day. However, the contents of an ice dispenser are not entirely replaced. There are fragments of ice cubes or shavings that can sit in the system for a long time. The water that fills the cistern comes out of the exact same pipe that someone fills their ice cube trays with. The difference is only which is more likely to sit stagnant for long periods of time. On top of this, the ice and soda machines are usually combined (as shown in the video), and the soda is post-mix, which is simple an incredibly sugary syrup. Bacteria looooves sugar.

I am not at all surprised that a toilet contains no (or little) bacteria. If they tested for something else, like remnant particles of poop or something, I think the results would still show that you don't want toilet water in your drink. But no, I wouldn't think it would be a hiding place of bacteria.

posted on Oct, 25 2013 @ 01:07 AM
link
No surprise. when I worked in fast food I don't recall the ice bins EVER getting cleaned.
I never get ice in my sodas anyway because it melts and turns the soda watery.


You're right on that. I'm not worried about pee or pooh bacteria getting into my food, it doesn't kill me and I don't notice it / taste it. Ever ate from a street vendor in a third world country? There's absolutely nothing sanitary about that. The food is outside with insane pollution that you can't even find in LA, the food itself is made in not-well-cleaned pots and pans, utensils and god knows just how long it has been sitting in the back of a roach / rat infested home, maybe days? But it still tastes good and you try not to think about those things because quite honestly if it doesn't harm you, it shouldn't matter.

Toilet water is the same as tap water, and a toilet seat is cleaner than your lips that you lick. You use your cellphone but yet it's covered in millions of different types of bacteria, but really how well do you taste bacteria? Does bacteria kill you? Maybe in some rare instances, but for the most part you just get sick with a weak immune system and don't get affected with a strong one.

Is it really that big of a deal that ice cubes -may- contain more traces of poop than toilet water? Yes, if it's at Taco bell then absolutely yes. But for the most part it's by microns of a percent of an ice cube. Your soda can that you don't wash before drinking from a vending machine has more of a chance to have rat or roach feces than ice cubes.

What is pretty bad though, is having a frosty or a chocolate milk at a buffet or fast food joint. Yeah, the inside of those things are fowl and nasty. Sure, it tastes ridiculously good but the diarrhea that you're almost guaranteed to get from the buffets may not be worth it.

But at the end of the day, you have a choice between bringing your own drink or not drinking there at all. Capitalism doesn't work well with strict government regulations, it works well when the people make their own choices in the matter. When you have all of these regulations, the customer in the end gets screwed. Don't wash your hands all the time, drink from that soda can without washing it, and don't worry so much about bacteria as you might right now. Bacteria helps you stay strong for the most part and salmonella isn't as bad as what some people make it seem. Almost impossible to get it but when you get it you just feel sick for 2-days and it's not even that painful. There are risks for certain individuals but those individuals should already be aware of their system's limitations.

ENJOY LIFE is what I'm saying. Don't worry about everything, just f'ing drink the soda if that's what you crave and savor the feeling. If you get diarrhea, you get diarrhea. You had it before dozens of times and you survived. =)