Huge Underwater Obelisks in Pacific Ocean at exact opposite side from the Great Pyramid?

David Flynn has videos out showing similar correlations to almost all megalithic structures.. On top of that he superimposes the constellations on the earth.. It gives a very unique and thought provoking hypothesis.. I'm not claiming his finds are factual, just intriguing..


But I don't believe no more in coincidences...


How well does your belief system serve you, Arken?

The premise of pretty much every ATS thread you've ever started has been debunked within the first two pages. Shouldn't that tell you something?

Thanks Arken
Oddity - The ocean floor/s around this "anomaly" shows to be in a range of ~ 16,800' below sea level.
The more southerly "obelisk" apparently (according to Google Earth) shoots up to ~ 10,500' below sea level (that's a little over 6,000' tall); and the very tall one (more northerly) shoots up to ~ 4,250' below sea level...which is a "rise" from the surrounding sea floor of more than 12,000'.
As others have said - if these measurements are accurate - this is worth investigation!
Thanks for the find!

posted on Oct, 24 2013 @ 11:30 PM
link
The Pacific Ocean? Uh oh, it seems that the sunken city of R'lyeh, whence Great Cthulhu lies dreaming has been revealed by Google...

The latter coordinates place the city approximately 5,100 nautical miles (9,400 km) from the actual island of Pohnpei (Ponape), the location of the fictional "Ponape Scripture". Both locations are close to the Pacific pole of inaccessibility (48°52.6′S 123°23.6′W), a point in the ocean farthest from any land mass.

The nightmare corpse-city of R'lyeh…was built in measureless eons behind history by the vast, loathsome shapes that seeped down from the dark stars. There lay great Cthulhu and his hordes, hidden in green slimy vaults.
—H. P. Lovecraft, "The Call of Cthulhu" (1928) 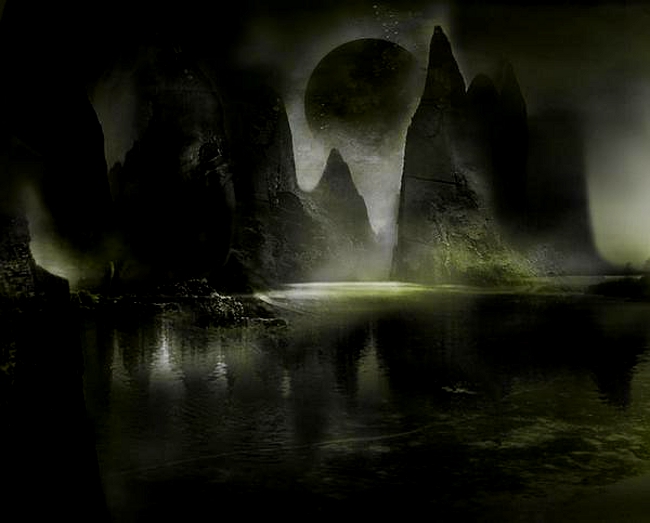 
But I don't believe no more in coincidences...


How well does your belief system serve you, Arken?

Stay very, but very calm mr astinax. Express your opinion on the thread in a civil fashion and DON'T post on me.

I'm not agitated, Arken, and my post was quite civil.

Indeed, it was intended as friendly advice. If you don't change your way of thinking, you'll become one of life's big losers sooner or later. That would be a shame.

We need more threads here which raise questions and point out anomalies. Whether these are genuinely geographic or computer generated by faulty software, they deserve our attention. Chances are they are not a glitch and may well exist despite remaining "unreported" by official oceanographic sources.

The implication for most people who still believe the fairy tales taught them at school that our planet is constituted of a core of molten lava will find the prospect of their existence to exercise undue pressure on their inner cranium, which might also be hollow? Jesting aside, the presence of such artifacts would be less surprising other findings which have been proven to very much exist in fact.

Countless archeological sites are veiled with implausible cover stories which don't match the data. That those who weave these tales are covered in lofty diplomas and represent large institutions doesn't make the factual, nor does their belonging to secret societies dedicated to covering up the truth and maintaining a mantle of secrecy over protected knowledge shielded from our eyes.

Some of us come to ATS to open our minds and not shut it down. Speculation is the mother of all new discoveries. Thanks!

Getsmart
edit on 25-10-2013 by Getsmart because: The only clues to what may be true... are those which cannot be proven to be false !

HooHaa
Cool find.. Even cooler if it turns out that their is substance to this claim..

David Flynn has videos out showing similar correlations to almost all megalithic structures.. On top of that he superimposes the constellations on the earth.. It gives a very unique and thought provoking hypothesis.. I'm not claiming his finds are factual, just intriguing..

If I said every major old civilization had a giant pit underneath it that looked like giant libraries with living people in them, would it be intriguing? Or would you need more concrete evidence than a tool which isn't used for finding lost caverns under historical cities?

posted on Oct, 25 2013 @ 06:08 AM
link
I agree with GetSmart on the point that more posts about anomalies should be made, and it's always great to observe and figure out what exactly that may be. However, Google Earth/Maps is not reliable enough to be used scientifically. Projects like Google Ocean are very small pet projects which don't get the dedication and support that their other products get simply because they are doing it "for fun" rather than "for profit".

This anomaly can be a few things. First, it could certainly be an error during extruding the data. This was mentioned before "should be a 1 but ended up a 7". Pretty simple concept since Google is known to be full of errors everywhere in street view / maps / everything else.

Second thing that it could be, is hydrothermal vent, or the result of one. I haven't fully grasp the hydrothermal vent math behind it but supposedly they should be able to elevate terrain due to heat expansion and the sulfides probably shape into the pointy terrain that you see there.

The third thing as far as I can tell is the possibility that it was once a "hill" so to speak but over time it broke and the rocky residue eventually migrated somewhere else.

What I think anyways

But there is a marked similarity.


In so many words, you are saying that it could be a rock.

I am glad that you said it, that way I didn't have to say it... and seem like a troll on Arken's thread that isn't even about Mars.


It's certainly not bad to post things on this forum that you can't explain, that's why most of us are here, for more information and to collaborate to come to some sort of sane and logical conclusion. That being said, we need some sonar of the area to really make any intelligent comments or speculation on the topic.

I think that any anomalies that are supposedly directly opposite to the great pyramids are worthy of investigation.

The first thing that came to my mind is electrical discharge.

If the pyramids were some sort of "energy machine" or whatever people claim, it's quite possible that it would build up a lot of material where ever excess charge was exiting the system. Similar to corrosion of a spark plug or the way ships use zinc bars on their hulls to prevent rust.

Where ever the system goes to ground there is potential for build up of material such as these pictures from an improperly grounded system in an engine. They show build up on a spark plug electrode of differing materials, I simply can not remember the term for the process that is the opposite of this, where material is collected at a differing location from the actual electrode due to electrical "bleed off"

VoidFire
I was thinking that these could be old remains of an ancient Volcano system. The Obelisks being the remains of a massive volcanic plug... the likes of which have been eroded over time to look the way they do today.

In my opinion this is a great find. I do not believe everything that scientist say, I do not believe those are ancient volcanoes. Well I do respect scientists but even though their mom's and dad's spent thousands on sending them to college, they do NOT no everything. They just have an opinion just like us.

VoidFire please do not think this is a personal dig to your post... I had read that as well somewhere and it was from a scientist. So quoting you was what sounded good.

If we ever want to find out where we came from then we need to go underwater because that is where its all at.

Starred and Flagged! Thanks!

posted on Oct, 25 2013 @ 01:38 PM
link
Doggone it! Why do you have to debunk every good thread that comes along on the first page!? The least you could do is wait til page 2 or 3!
I enjoyed your thought-provoking post, Arken. s&f

P.S. Why are trolls so mean spirited? Almost seems like they lie in wait for a thread they can spew their vitriolic musings on....just sayin'.
Ms Nugget

posted on Oct, 25 2013 @ 02:04 PM
link
Yeah, I have a tendency to think that a lot of submarine "objects" detected as tall spikes are a result of faulty scanning an imaging rather than something real. Wasn't there recently another huge "pyramid" discovered in the Azores?

posted on Oct, 25 2013 @ 02:08 PM
link
Interesting. But first...what is your Terrain Elevation setting? it can be anything between 0 and 3, but any number above 1 (like if it's set at 2.35) generates graphical exaggerations. Make sure its set at 1, and go look at this spot again.

Realize you weren't talking to me...but...my Terrain Elevation' was set on "1".

Arken
This is really weird! What lies on the exact opposite side

Except it's nowhere near the exact opposite? If it were exactly opposite, it would have to be located on at a latitude of 29.9792° S. The images you are showing are over 2 degrees out. That's like 150 miles away from opposite.


In my opinion this is a great find. I do not believe everything that scientist say, I do not believe those are ancient volcanoes. Well I do respect scientists but even though their mom's and dad's spent thousands on sending them to college, they do NOT no everything. They just have an opinion just like us.

No, some people have expert opinions..and then there's other people who look at rocks and cry "obelisk!"

I'm not agitated, Arken, and my post was quite civil.

Indeed, it was intended as friendly advice. If you don't change your way of thinking, you'll become one of life's big losers sooner or later. That would be a shame.

Civility is not "claiming" that if they don't change there way of thinking they will become one of life's big losers sooner or later. That itself is a irrelevant, arrogant, pompass statement to make to anyone on these boards.

Arken is bringing items to the boards he finds interesting, whether debunked or not it's neither here nor there, it's fun to indulge even if it's a rock or glitch in the system.

Here's some "Friendly advise", postulating someone's thought process creates a big loser sooner or later, is a self mirroring image of how the individual postulating view themself.

Thank you for posting this, it's always fun to read what you bring to the boards, even if it's a rock, I appreciate your dedication to bring anomolies here for discussion.