posted on Oct, 24 2013 @ 05:13 PM
link
I just finished watching the episode. Thank you OP for pointing it out that was most excellent! The atmosphere and set were perfect and wow that really was James T Kirk.


Isn't this violating any copyrights and intellectual property laws?

posted on Oct, 25 2013 @ 05:52 AM
link
I don't think there will be another Star Trek series anytime soon. But if there were, I'd like it to continue where Voyager left off, it would be the logical thing to do.
As for this video/episode, fan-made or not, the actors are much more authentic than the ridiculous ones in the 2009 and 2013 Star Trek movies. Absolutely hated them, they belong in shows like The O.C. and Beverly Hills 90210, not Star Trek.
edit on 25-10-2013 by sleepdealer because: (no reason given)


This made my day, thanks OP!


Well, Quinto proved himself as a real baddie playing Silar in Heroes. He was so mean! lol

I agree that another Star Trek show should be after the adventures of Voyager.

I'm thinking especially one about the Time Traveling agents of Starfleet, past the year 2900 I think.

posted on Oct, 25 2013 @ 05:33 PM
link
So amazing..I get goosebumps reliving the old school startrek! Thanks for sharing this

Captain Kirk needs to be more of a man he was too feminine for my liking.


Thanks for bringing this to our attention. I'd have to say that this episode was about up to snuff for the original Star Trek. Scotty, Chekov and Sulu were quite up to standard. Kirk was so so, and they really need a new McCoy; Spock was not much better. The female casting was of impeccable Star Trek standards -- giggity giggity.

The plot was very Star Trekkian, and it got bonus points for having a return character from a prior episode of the real series. It did ST one better by having that final scene showing salvation for Apollo.

But seriously, get a new McCoy. And if they do get kickstarted, they need to do an episode with a space duel with a Zorn ship.


That was really good considering it has been years, I used to watch the original series as a kid. The sets are quite nice, I was impressed and it just goes to show what a few people with ingenuity, motivation and defined objectives can do on a small budget. I wish I had more to throw at them, but at least I can send them $50. I really hope they reach their goal, produce more of these episodes and get them presented on mainstream, non-pay, TV.

posted on Oct, 26 2013 @ 04:27 PM
link
I am currently watching it. It's excellent! as a sci-fi fan, and as a Star Trek fan, it's exactly what I wanted. It doesn't have any complex plots, just space exploration and mystery. That's what Star Trek is about!

posted on Oct, 27 2013 @ 12:43 AM
link
I guess I have to be THAT Star Trek fan here on the thread. But the final 2 years are considered completed courtesy of Star Trek: The Animated Series.

Personally, I think Trek needs to take a long nap and try to retain some dignity. I was not happy with the film reboot. Sleep, Star Trek, sleeeeep.

posted on Oct, 27 2013 @ 02:42 PM
link
Wow, I was not aware that the original Star Trek series was cancelled after only two seasons! I came into the story as part of the Next Generation-generation...

And to think those two seasons sparked off TNG and successors as well as what, 9 or 10 movies by now??? And the whole trekkie culture with the big trekkie events and trekkie industry... I've yet to see a decent star trek video game though. There may be one or two but I missed them. They should just focus on an RPG/RTS starship battle game. Maybe even hex style... Planets on some hexes that you can use to send.an away team for random bonus or penalty, maybe mine some resources... Distress calls from other ships or planets you must help... Maybe a set series of missions...with at least 20 missions. Plus bonus missions. Maybe some achievements.

But anyway yeah that's crazy they only had two seasons... Makes it less impressive when some trekkie talks about "episode 14 when Spock has to fight his alter ego" or some crap. You only had to memorize two seasons! How do people even have arguments over it-oh yeah they did not have internet back then hehe... If you missed an episode, that was IT. You must wait for the DVD set to be released 20 years later! And spend that 20 years bluffing your way through debates and discussions of an episode you never even saw! O.O Dude...those guys were straight up SAVAGES back then!


There is an understanding with Paramount.
As long as there is no attempt to make money from any fan based products (movies, books, etc), or damage to the brand, people are free to indulge themselves.


I thought the exact same thing! I was watching it here in bed and said that to my wife. That and the dr. Were my to big gripes. Other than that it was ok.


imvho, with no disrespect intended to The William Shatner at all, I suspect that was intentional.

Even the very latest star trek movie was on to this quirk. The captain was played perfectly.

Not that it was in any way bad or cast doubt on his being a true blue lady's man. 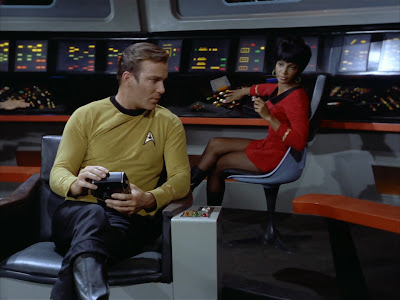 Johnny Depp's Captain Jack Sparrow might have even been an exaggerated parody on this.
edit on 29-10-2013 by reject because: (no reason given)

posted on Jul, 2 2014 @ 08:42 PM
link
Excellent work by the actors, but Spock's ears need tweeking - also can they afford a symphony yet? Otherwise, I like the tempo, costume and it wouldn't hurt to inject some of the genre of the 1960's in there, just because they can.