I bring tidings of great joy for all Star Trek fans, particularly fans of the original series. If you recall, the U.S.S. Enterprise set out on a 5-year mission, only to be cut short by 2 seasons due to cancellation.

Well, a kickstarter project has come up to complete the 5-year mission, and they have already produced 1 episode available for viewing.


Star Trek Continues is a non-profit, fan produced webseries that was launched in May 2013 with its first episode, “Pilgrim of Eternity.” The show is being produced to complete the final two years of the original 5-year mission. Our inaugural episode brings back original series guest star, Michael Forest as Apollo. The accuracy of the sets, lighting, filming and the quality acting and characterization brought great praise and support from Star Trek TOS fans all over the world.


They even have Chris Doohan, the son of James Doohan from the original series, playing Mr. Scott. 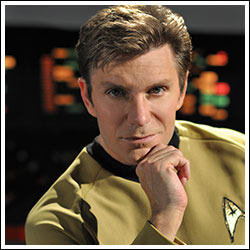 Here is the first episode, entitled "Pilgrim of Eternity". Enjoy!

did they JUST release it? i dont see a date on the youtube page. though im youtube-dumb and may not be seeing.

I *love* the fact these guys have screen-accurate costumes and are shooting in the "style" of the original show. Having said that, the original show should stand on it's own for the test of time.

Imagine if I found a Dirk Benedict, Richard Hatch and Lorne Greene (with padded robes) look alikes and tried this?

Would you want to watch a "continued" original Battlestar Galactica?

I also noticed they aren't using Majel Barrett's voice for the computer, which is a *must* for anything Star Trek.


Wow that is brilliant! a rebirth of a masterpiece.

MystikMushroom
I also noticed they aren't using Majel Barrett's voice for the computer,
which is a *must* for anything Star Trek.


It sounded to me like Marina Sirtis (Counselor Deanna Troi) is the
new voice of the ships computer.

There weren't a ton of FX shots actually needed for this episode,
but the sets are comprehensive. I don’t know if they used the same
sets as Phase 2, since that was shot in upstate New York and
(according to IMDB) this one was shot in Kingsland, Ga., but kudos
go to whoever put these sets together. Same for the costuming.

Overall I’d say that “Pilgrim of Eternity” is a strong entry in the
continuum of fan-made continuations of TOS.

I look forward to the next episode.

I am a fan of them doing more acting than I am of special effects so I am glad they are pretty much sticking to the way the original was produced.


Hell yeah man. I love the fan made stuff.

I dont know if you saw it, but tim ross (tuvok from voyager) directed a fan made movie which took place in the late TOS era called "of gods and men". It had MANY of the original cast members and was actually....AWESOME. Watch it.

He is also working on a new series pilot in the form of a fan made movie ( not a sequel to his first) with double the budget of "Of gods and men" called "star trek renegades" , which will be in the canon universe, taking place several years after the events of ds9 and voyager.

so yeah. Love this stuff. Thanks for reminding us.

Here is a link to a thread I did with links to the videos if anyone is interested....


He is also working on a new series pilot in the form of a fan made movie ( not a sequel to his first) with double the budget of "Of gods and men" called "star trek renegades" , which will be in the canon universe, taking place several years after the events of ds9 and voyager.

This is some of the best trekkie news I have heard in a while! While I do like TOS I have always been more of a fan of the later serials.

That was really well done! Vic Mignogna IS Kirk!

I even loved that they kept it in the format or the original series. I do hope they manage to do the 2 years left to do for the Enterprise's missions. I'll gladly watch it.

And seeing a sci-fi show that has a positive message at the end? How shockingly novel! lol

I'm all for it. And Scotty was also very great!

It's a go. If I hadn't thought it had all the promise necessary to make a good show, I would have switched it off in a 3rd of the 60 seconds I gave it. I want to see more. Going back to finish it.

posted on Oct, 24 2013 @ 12:37 PM
link
I just found it highly amusing that Vic Mignonga is playing Kirk... Especially since I know of him from doing voicing in English dubbed animes... Like Fullmetal Alchemist. Just one of those things I didn't expect.

And yes, Marina Sirtis is the voice of the computer.