posted on Oct, 23 2013 @ 07:11 PM
link
This is shocking. A lot of food companies we would have never thought of as being GMO supporters have been revealed as being some of the biggest donors to the lobbyists who are fighting GMO labeling legislation in Washington State. A few supposed "organic food" companies have even been revealed.

As was expected, major food corporations and GMO users such as PepsiCo, Nestle USA, The Coca-Cola Co. and General Mills, among many others, had secretly donated millions of dollars to the GMA campaign to stop Washington Initiative 522, which would require the labeling of all products containing GMOs if passed in November.

Additionally, as Mark Kastel of the Cornucopia Institute stated, “Consumers might be surprised to find out that some of their favorite organic and natural brands, hiding behind their lobbyist, the Grocery Manufacturers Association, are contributing bushel baskets of cash towards thwarting their right to make informed choices in the supermarket.” That list includes brands such as Santa Cruz Organic, Green and Black's Organic, and Burt's Bees.

Click on the link to see the whole disgusting list and how much they donated to keep their consumers in the dark.

I hope people who oppose GMO products pay attention to this list and adjust their shopping habits accordingly.


Hi Mr.FortAnthem!
i think its all about money..In vietnam Pepsi and Coke Make hundret Family starving to Dead, by take over their land with Ilegal Land takeover..
very sad that a company that use such thing to get Money..Very sad.


Once you step through the rabbit hole you will discover that if anything, that list of companies is painfully obvious in whom and what they serve.

Didn't surprise me at all in fact I would have flipped over to have discovered otherwise. 'They' (tptb) love running the entire mechanism on people that they can control and get to sell their souls for a piece of this lying reality, even if it's just for a moment in time that in the end will mean nothing except for their ruin and destruction.

If this is shocking to you then it means that you are beginning to wake up to what is really happening in this here little blue ol' world of ours.

His book Seeds of Destruction 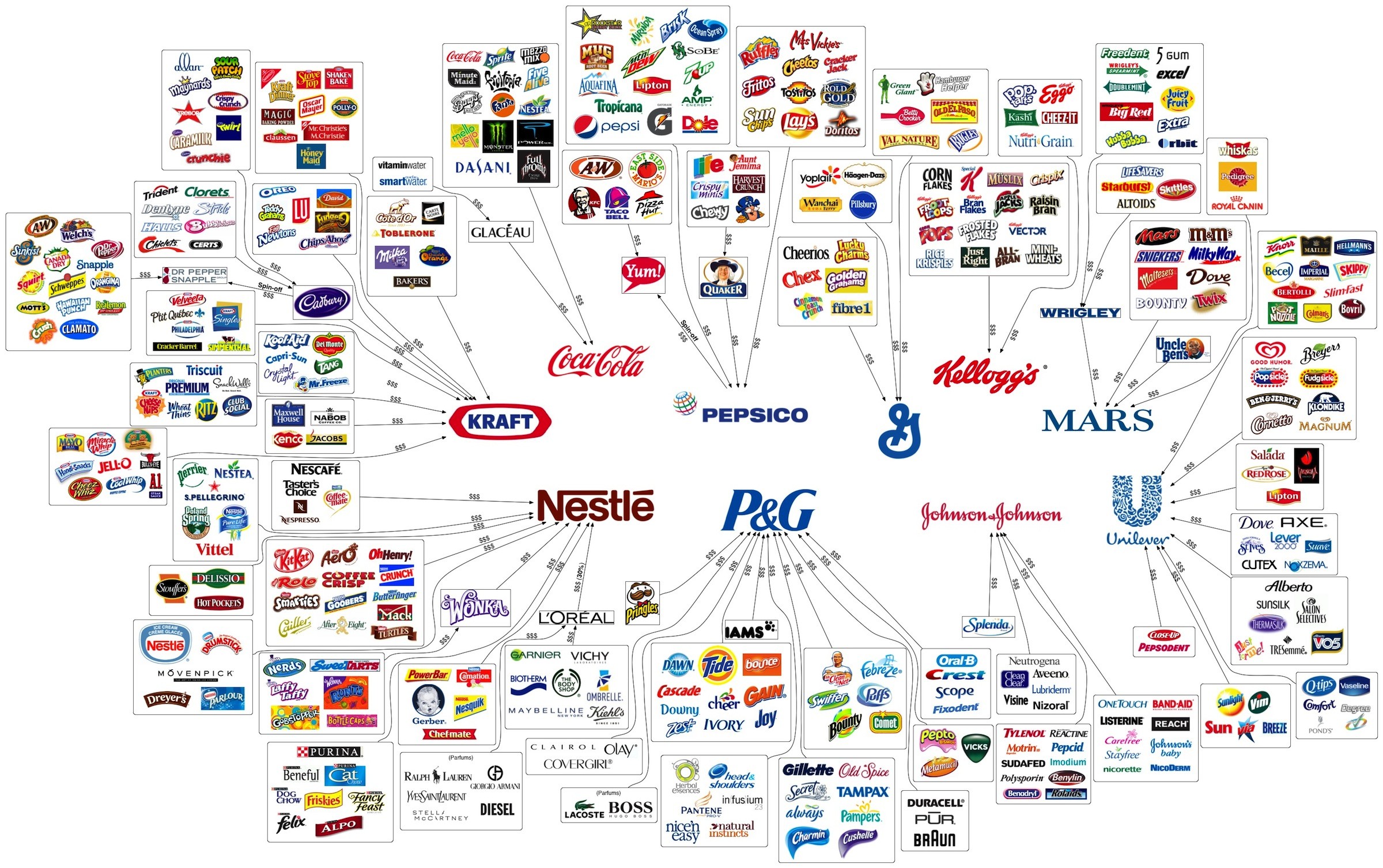 
This might help clear a few things up. Most of these companies are part of the same entities.

A few supposed "organic food" companies have even been revealed.


Maybe because the Washington initiative is a very poorly constructed law. Among other things, it's very unclear about responsibility and enforcement.

Who's responsible if a product is failed to be labeled and is found to contain GM material? The farmer in Iowa who grew the GM grain? The mill that ground it? The broker? The trucker? The tortilla factory that used the corn? Or is it the local store that sold the unlabeled product?


The department, acting through the attorney general, may bring an action in a court of competent jurisdiction to enjoin any person violating this chapter.

Sort of vague, don't you think?


This might help clear a few things up. Most of these companies are part of the same entities.

Wow Lot Of them! very sad..
Anw, Cool Avatar Sir,what is that> from a movie? very Cool

Maybe because the Washington initiative is a very poorly constructed law. Among other things, it's very unclear

Funny how they are so adamant everyone must have healthcare!?

Face it, its not tested, it does not work! It is not safe!
None of it!

Face it, its not tested, it does not work! It is not safe!


It is tested. Not sure what you mean it doesn't work. No indication it isn't safe.

But Washington's initiative is a very poorly constructed law. Looks to me like the neighborhood grocery store is going to bear the brunt since any out of state source is out of the jurisdiction of state courts.

What does surprise me is companies like Green and Black's organic. It's one of a few companies on that list which sell here in Australia (aside from the biggies of course).

Well, now that I know where their heart is, i'll stop buying their product.


This GMO hate needs to stop!

Do you even know what GMO is?... or do you just follow along with the hate like sheep? I really question the age of some of you here. How many of you are PETA nuts?

Are you aware your hated GMO has led to increased crop production, resistance to disease and pests just so you and the rest of the world can have instant boxed food on your table? If you don't like it.... cultivate your own piece of land and grow you own food... let nature take it's course on your crop and let me know how it works out for you. I hope you have the skills and knowledge to grind your own flour and the ability to make a cake from scratch... because you are going to need to know this stuff.

What are you going to do when the land your worked so hard to cultivate and plant is devastated by a disease or insect infestation and you are entering a long winter with no food to feed yourself or family? Keep in mind...in this scenario, their is not a government you can turn to for help... If you have your friends and neighbors convinced GMO's are bad... they won't be able to help you out either because their crops were devastated as well.

Are you aware that you, your family and even your family pet is a GMO in a way? Just because the previous mentioned was not created in a lab... does not mean your Genetic makeup is pure. It was cultivated in a way and changed through time and selection. GMO science is just an accelerated change in plants and animals to make them resistant pests and disease.

The Hate some show to GMO's is sad... Are the people that oppose them, against curing Genetic diseases? do you wish people diagnosed with cancer to die? GMO's do not cause cancer... Nor do they cause genetic diseases by ingesting them.

And I am not one you really want to argue with if you are a GMO Hater.... I am a carrier of an X-linked genetic disorder, have had family die of cancer, ALS and a Prion Disease. Have a child affected with an abnormal gene I passed along, and another special someone in my life who is affected with a muscular disease due to family genetics.

GMO Haters are apparently against science and research. I have my beloved pets and hug my trees as well... But I have some common sense... I like rats, bunnies, most humans and monkeys. But if the cute bunny, rat or Monkey might be the key to change the genetic disease of someone I love... I would be happy to support the research.

Many lives were saved by pigs in my decade.

To sum this up in a neat little package.... GMO haters are dangerous and a threat to the well being of society.

But I forgive their ignorance and hope they never have to deal with an actual
Genetic crises of their own... if they ever do.... it will be a Big wake up call.

They want us to eat their products without us knowing it!

Does that sound like the actions of someone who cares about us, or someone up to no good?

burntheships
Face it, its not tested, it does not work! It is not safe!

Long term, there is no evidence whether it is safe or not. The technology hasn't been around longer than the lifespan of a human.

The long term test is, unfortunately, on the population itself. That is why it is important to get us to eat it. They can't let people know whether we are eating it or not because if they did so, people might refuse to eat it and ruin their experiment.


LOL Ok, I guess YOU don't know what GMO means for pete's sake.

It is injecting insecticides and herbicides into the genetics of the plant, to make them resistant. Did someone inject you, to give you your X linked genetic disorder?


Wow, and you dont see that your diatribe could also be considered in the same way. People like you are part of the problem and not the solution, and your perfectly happy to be experimented on without your knowledge and with no indication on whether it's safe for you or not. Jesus, have you ever read the monicker for ATS ? deny ignorance.

Face it, its not tested, it does not work! It is not safe!


Not sure what you mean it doesn't work.

Were talking cotton crop failures that drive farmers to suicides,
were talking more and more glysophate every year....

posted on Oct, 24 2013 @ 10:52 AM
link
Thank you for posting this! I have been a loyal Burt's Bees customer for a decade. This really makes me sad. When I get get home from work I will be writing them a letter. Accompanied by a picture of all my BB products that are going into the trash.
edit on 24-10-2013 by nikkib0421 because: (no reason given)

posted on Oct, 24 2013 @ 11:09 AM
link
Just heard on the radio the other day that these GMOs were reported tested on mice for 90 days with no problems. But at 120 days they developed tumors. Anybody else here this?

Insects and weeds started becoming resistant to insecticides and herbicides before there were GM crops.
pubs.aic.ca...
www.ingentaconnect.com...

posted on Oct, 24 2013 @ 11:41 AM
link
The problem with this law was that in many cases the companies that made the finished product had no way to tell is there suppliers were slipping in GMO products.

With ingredients like HFCS you can not tell if its made from GMO or non GMO corn.

You also can not penalize farmers that grow non GMO corn if there crop gets contaminated by Monsanto corn from the next farm down the road. They have enough problems if Monsanto finds out and sues them.

This law would have only ended up with manufacturers posting everything as having posable GMO ingredients just to keep from being sued.

In Calif we have the same problem with Proposition 65 chemicals.

Lawyers tell business owners to post the Proposition 65 warning signs on the doors of there businesses no mater if they have prop 65 chemicals or not just to be safe.

There is no penalty for posting an unnecessary warning sign. Because of the overuse of the vague warning, the ubiquitous signs ultimately communicate very little information to the end user.