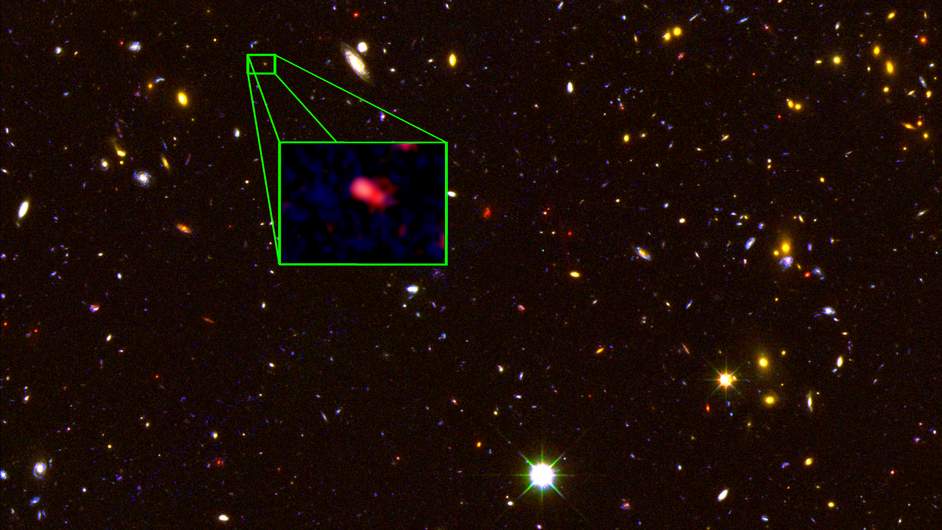 The most distant galaxy ever detected has been spotted by scientists studying the faint red light it emitted some 13 billion years ago. Light from the hot cluster of stars, known as z8-GND-5296, began travelling to Earth some 700 million years after the Big Bang. The universe was only about 5% of its current age of 13.8 billion years at the time.

We are getting there

This is wonderful, thank you. I am surprised that the Hubble and other telescopes haven't taken more Deep Field pictures, where the telescope is pointed at one tiny dark spot of the sky for many days. If I controlled the Hubble I'd make at least one of these a month, and even try to point it at the dark sky in the Deep Field pictures to go even deeper. Maybe when the James Webb telescope is operating then these early galaxies will be better seen and studied.

The most distant galaxy ever detected has been spotted by scientists studying the faint red light it emitted some 13 billion years ago. Light from the hot cluster of stars, known as z8-GND-5296, began travelling to Earth some 700 million years after the Big Bang. The universe was only about 5% of its current age of 13.8 billion years at the time.

We are getting there


Truly amazing! This is refreshing to read after all the other goings on in this world. They basically, Point the telescope to a dark point in the sky and discover these galaxies and exoplanets. Thanks for posting.

Every time I look at an image of a galaxy, I can't stop myself from asking the same thing most others ask: "I wonder if anyone in that galaxy is looking at ours, too". I've always wondered that whether it was a star in our own, or another galaxy, ever since I was a kid. Some day, we'll be able to answer that

And I must admit, seeing this galaxy, as old as it is, really makes me wonder what we're going to see the further we look out there. Something tells me it might not be what we're expecting, either.

posted on Oct, 23 2013 @ 04:42 PM
link
AMAZING!
When I look at pictures that contain so many galaxies I can't help but think that there's a valid chance that in one of those there is a little fellow named Frodo Baggins smoking some pipe weed, staring at the stars in the night sky and waiting for something to happen...

...or a world dominated by giant flying ants that speak french, and only in rhymes...

...or maybe one where monkeys with clothes think they have all the answers to everything, and take advantage of one another creating an unequal society in which few of them have most of the wealth and control all other monkeys, dumbing them down with TV, fast food and easy pleasures, so that they don't realize they're being screwed and go on surfing through their short lives without really enjoying them......oh wait......

But seriously, think of all the possibilities...IT WILL BLOW YOUR MIND.

Maybe this galaxy doesn`t exist anymore but it`s a funny feeling if we think of other civilizations from distant galaxies watching the stars and wondering if there`s life out there.

Can`t wait the day we go so deep as the age of the universe. What will we see ?

posted on Oct, 23 2013 @ 05:28 PM
link
Ok. So the ancient galaxy is awesome. Great find OP. I'm curious though. That's a picture of galaxies right? Then is the brightest object in it a star the size of most galaxies? Or just a star that's closer that we see in the foreground.

Maybe this galaxy doesn`t exist anymore but it`s a funny feeling if we think of other civilizations from distant galaxies watching the stars and wondering if there`s life out there.

Can`t wait the day we go so deep as the age of the universe. What will we see ?


It is a funny feeling, isn't it? Unsettling & soothing at the same time. What civilizations might have risen and fallen over the eons? What civilizations might exist there now? Do they look like us? Do they look nothing like any human has ever imagined? Do they ponder the known universe as we do? Or have they reached the answers to their questions about it already? What does their night sky look like with their galaxy's band across it?

The things the universe has one ponder, eh?


I like that, I just can't get my head round the idea of a 'big bang'..well at least not the celestial type.
The 'big bang' is certainly an accomodation for beings like us, where everything has a beginning and an end in a very short timescale..Meh, it doesn't even do that, since we are only somewhere after the beginning, have only Earth based ideas on what the end of the universe would be, like for instance a big coming together as if say, gravity will prevail all over the Universe and eventually pull all matter back together into a big seething mass..or for that er, matter, a dead blob. We don't even know how to describe properly what we mean when we say Universe since it should include everything that we are made of, and dark matter. WTF we ain't got any dark matter in us? it only collides with our bodies every so often and few put those numbers on it, you can try them here,
www.technologyreview.com...
You will see that the article heading taken from MIT, (I think) has absolutely nothing to do with interaction, just a 'fact' of collisions with the human body as in 'Passing through mostly' with the "Every now and then" aside, and definitely no mention of what any interaction could mean, just that dark matter exists.
edit on 23-10-2013 by smurfy because: (no reason given)


The white and yellow objects that have the lines radiating from them are stars that are closer to us.


The brightest part of a galaxy would be the very center when it emits a quasar pulse. That galaxy is far enough away, that if it hasn't emitted it yet, it will sooner or later. Quasars outshine the whole galaxy and shoot out distances larger than the whole galaxy.
edit on 23-10-2013 by Krazysh0t because: (no reason given)

posted on Oct, 24 2013 @ 03:49 AM
link
What we need is a gigantic space-based radio telescope. The further out you look, the redder everything becomes, meaning that you will only see stuff in infrared, microwave, and finally radio frequencies.Then we'd be able to see almost all the way to the Big Bang, to the first clumps of stars that formed galaxies.