posted on Oct, 23 2013 @ 12:31 PM
link
hi ATS i'm hoping one of our flyboys can identify these planes found on google earth in the Arizona area? 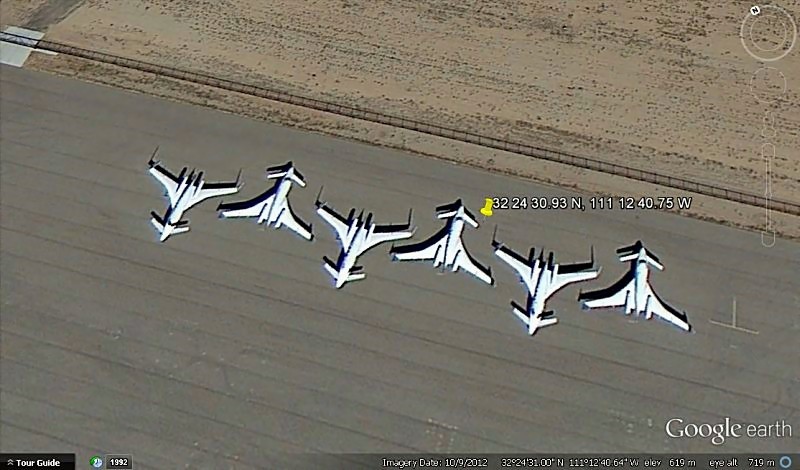 thank you so much for the prompt answer my friend

posted on Oct, 23 2013 @ 12:43 PM
link
reply to post by RoScoLaz
I liked the aircraft when it first came out due to some of the ice and snow storm airports I was flying into.. Never flew it though.

posted on Oct, 23 2013 @ 12:45 PM
link
Anyone humor me on add'l details of the cool-looking planes above? From the perspective of an ATSer w/a passion for planes... I can google search of course but What's the fun in that?

posted on Oct, 23 2013 @ 12:49 PM
link
here is a whole page of them. i think they are out of production/
iirc the histroy channel, had them in one of their shows and that shot looks like the bone yard for them.

These are biplanes developed by the British during the First World War. With 750hp, their maximum airspeed is 60 miles per hour and their sole armament is a torpedo which is released by the pilot pulling a strong piece of string.

Here is some footage of the Farley Swordfish where you can see that it is obviously the same plane:-


The Starship was designed in the 1980's when there was a brief fad for adventurous looking Canards in the corporate sector. This came on the heels of the launch of the LearFan pusher turboprop in the late 70's and it's extensive use of composite structures.

Most of these proposals came from start up companies who disappeared with their designs, such as the AvTek 400 and Omac Laser 300 and the Starship was the response from Beech with the design being commissioned from Burt Rutan. His Scaled Composites company built the demonstrator which drew heavily on SC's previous small private canards such as the VariEze and Defiant.

This craze quickly died away however and the only aircraft to emerge with any kind of success was the Piaggio Avanti. This had begun as a joint venture with Gates ( of Learjet fame) but the US partner withdrew.

thanks for the additional info

posted on Oct, 23 2013 @ 05:46 PM
link
I was working at a small airport in 1990 when a Starship landed and taxiied to the ramp. A local guy was looking into buying one and they came to give him a test flight. He asked how many people it could hold and when they told him he asked "Who wants to go for a ride?" NIce plane, roomy inside, but noisy. He didn't buy the plane.

posted on Oct, 23 2013 @ 06:30 PM
link
Looks a lot like the Fireflash from The Thunderbirds. I wonder if that is where the Beechcraft designers got their inspiration from. Cool aircraft.


yeah i thought they had a thunderbirds vibe about them too.