posted on Oct, 23 2013 @ 10:05 AM
link
I looked through the search and didn't see anything, but this thread peaked my curiousity. www.abovetopsecret.com...

A couple of oddities have recently washed ashore. in my opinion, there is to much of a coincidence here

Two large oarfish, slender snakelike sea creatures, have washed ashore in California in the last two weeks. While their appearance may conjure thoughts of mythical sea serpents, another legend suggests their death could actually spell disaster.

The Stejneger's beaked whale is rarely seen in the wild. The species typically dives deep in subarctic waters to feed on squid and small fish. It is believed to migrate as far south as Northern California, and how the whale ended up so far south will probably remain a mystery.

I know that some have debunked the myth, but this is a rare thing...isn't it?


I have to think it's more methane gas releases than the radiation simply because I thought I read somewhere on another thread possibly that it would take a few years for that radiation to have any true effect on the California coast, but I could be wrong. I don't have time right now to search for it. But, I also believe it has to do with the gas release because this is not the only place we've been having these fish and animal die-offs. They have been occurring all over the world and rising rapidly in frequency over the past three years.

Here is from a post I made back in March of this year;

The vast majority of these die-offs are from methane and hydrogen sulfide plumes in the air or in the sea. As with so many other phenomena I've listed in this dangerous gas thread; earthquakes, fireballs, disease, volcanoes, sinkholes, super-storms, sonic booms, sky noise, floods, blizzards, droughts, wildfires, unexplained explosions, mysterious deaths, etc., etc...., everything is on the rise! I continue to put up numbers such as these but the debunkers and skeptics will continue to argue that nothing is on the rise, but the numbers don't lie. This isn't a case of better reporting. If these numbers had a comparison from say 50 years ago, 20 years ago, but no, this is over three years.

And the rate per day has risen already this year to nearly three die-offs per day.

And this site has been tracking these die offs since 2011 when the numbers began to rise.


Hmmm. As far as the myth about the oarfish go, I tend to agree with that author that the relationship between oarfish shoring themselves and the correlation to quakes as months to a year is an awful long time between the two. Overall, though, I'm worried about our oceans. It's the like the starving sea lions that washed up by the thousands a few months ago. It would seem our oceans may be starving.

I don't think there is any one single answer as to why this may be the case. It could be a mixture of Fukushima, warming ocean, overfishing, and other pollutants. At some point or points, it seems like there could be some sort of ecosystem collapse going on as if something could be affecting the base of the food chain.

I know people really take issue with the whole global warming thing but there is something deeply disturbing going on within our oceans. Like it or not, the Pacific Ocean is growing more acidic and with this follows death. This is not something that we can simply pin on Fukushima. We're all truly culpable:
apps.seattletimes.com...

We are actually on a runaway freight train. When you look at what is occurring on land and at sea, it's can be truly heart stopping. Worse yet, I don't think that we'll ever be convinced as a population enough to actually stop and let the world heal as much as it can. There's just too many powerful interests that would rather carry on with the status quo that profits them influencing far too many other people who don't want to believe that anything is even wrong. If we don't stop, I don't know what is going to be awaiting us all in the end. I'm good at projecting outcomes and this I chose not to see because it's just too terrifying.

But hey, people can just write me off as some liberal global warming loon and ignore me. That seems to be what almost always happens. Makes me feel more than a little like Cassandra of Troy.

posted on Oct, 23 2013 @ 10:39 AM
link
I'm afraid that the problems with Fukushima are going to turn out to be a disaster of Biblical proportion. Of the two, I'd be more inclined to listen to this guy who has traveled the Pacific for thousands of miles than any "experts" spouting carefully worded opinions. While it is understandable that the nuclear energy industry is concerned about public opinion, we ARE talking about the lives of everyone on the the planet.


And acidification. There's actually a huge amount of scientific research on the acidification of our ocean. This all has predates Fukushima by several years.

Increased temperatures in an environment causes an increase in pathogenic activity as well as increases in susceptibility, just as the NIH article states. Not only can we see this in the oceans primary life zones (coral reefs) but we can see it as well on land.

Currently, millions of bats around the world are dying. These nighttime predators of the insect world are falling to yet another disease that thrives in warmer temperatures called White Nose Syndrome (Geomyces Destructans). G. Destructans really started to hit in the same year as White Syndrome began to really hit the coral reefs (also 2007). Coincidence? I think not. Currently, over 80% of the US population of bats have died to WNS.

Additionally, our dear little pollinating friends, bees, are dying as well. We all know this. Number one suspected cause for Colony Collapse Disorder? Pathogens. When? 2006.

Two picornalike viruses—acute bee paralysis virus and Kashmir bee virus—along with deformed wing virus, black queen cell virus, and two species of Nosema, were found to be more abundant in CCD hives. Infection by multiple picornalike viruses could result in honey bees having reduced abilities to synthesize certain proteins, the lack of which would leave the bees more vulnerable to additional stresses like pesticides, nutrition problems, or other pathogens—which sounds like a possible root cause of CCD, Evans points out.


What else is dying and probably to disease?


Large die - offs of amphibians are often caused by ranaviruses. USGS scientists have isolated ranaviruses associated with die - offs in over 25 states involving more than 20 species amphibians and two species of turtles in mortality events ranging from one to thousands of individuals .www.nwhc.usgs.gov...

Parmesan reports seeing trends of animal populations moving northward if they can, of species adapting slightly because of climate change, of plants blooming earlier, and of an increase in pests and parasites...."I feel as though we are staring crisis in the face," Futuyma said. "It's not just down the road somewhere. It is just hurtling toward us. Anyone who is 10 years old right now is going to be facing a very different and frightening world by the time that they are 50 or 60."http://usatoday30.usatoday.com/tech/science/2006-11-21-warming-species_x.htm

As a biologist (and an accountant), I know I'm terrified by what I see. I apologized to my children already as we're committing harakiri and this all predates Fukushima. It would be great, in a way, if we could shift the blame to one entity and off ourselves. However, that would be a lie. We cannot afford to lie to ourselves. Not for ourselves and not for our children or else we are doomed. I can't put it any more simply. And if you expect that our industries are going to do something about their roles in this, well, as an accountant as well, I will say that that is delusional. There is nothing in accounting that counts the loss of life, especially wildlife.


Many people believe deep sea organisms come topside when the plates become distur d, which can be a precursor to a quake.
In Japan, these squid come to the surface.
They came up in numbers just before the EQ in 2011.

Oarfish rarely do this, especially off the coast of CA.
So who knows.

posted on Oct, 23 2013 @ 12:09 PM
link
I don't have a position one way or another concerning oarfish as a precursor to a large earthquake, but there is definitely something wrong with the local marine environment in southern California.

In January of this year, an unusually large number of sea lions, mostly pups, began turning up on soCal beaches dehydrated and severly malnurished. The NOAA Fisheries declared an UME (unusual mortality event). This graph shows the significant increase of distressed sea lions just thru March 2013: 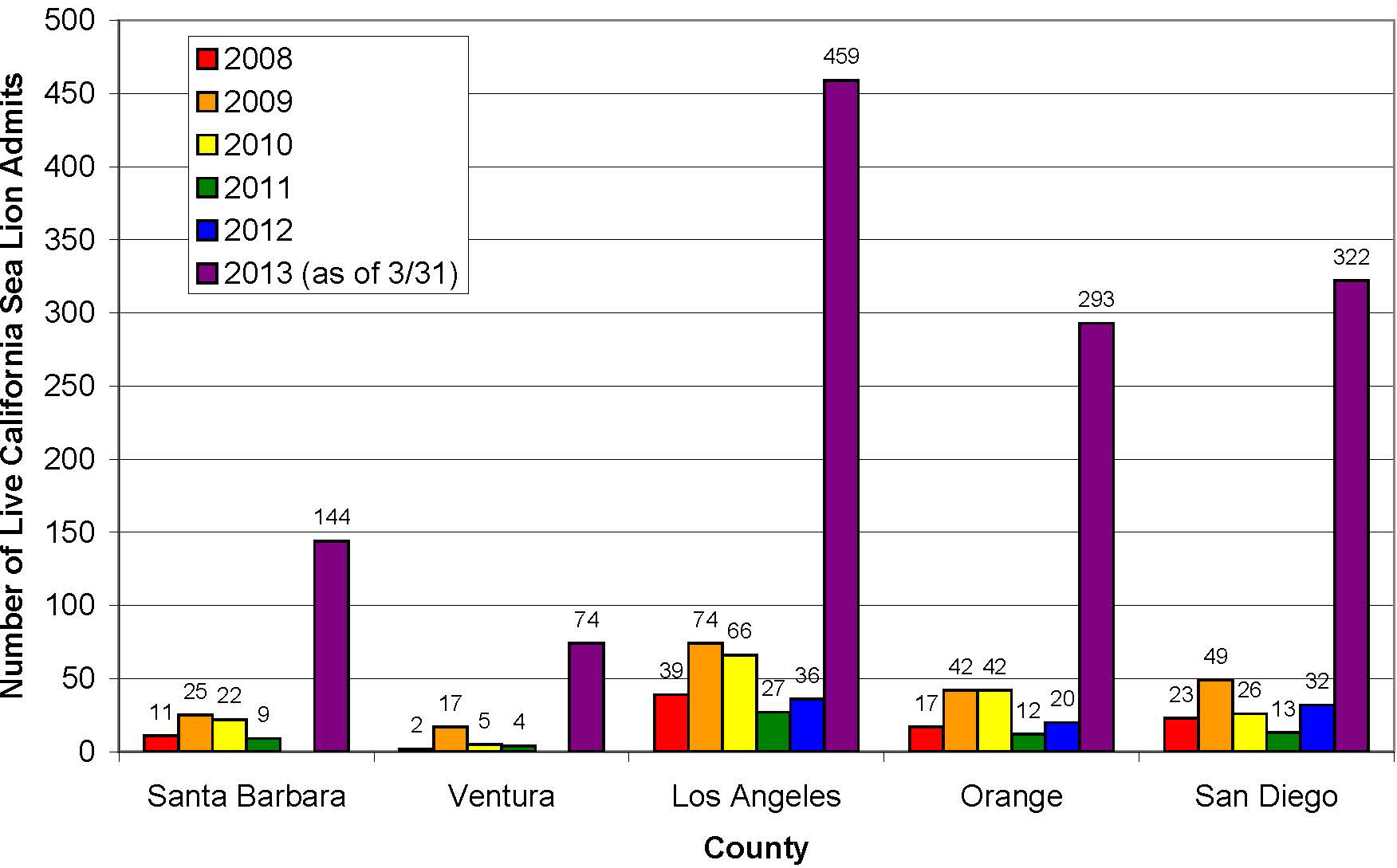 I was searching yesterday looking for updated totals for this sad event, but no luck. It does however look as if conditions for the mammals are improving, as there were only 7 sea lion patients at the Pacific Marine Mammal Center in Laguna Beach.


My hunch is that offshore natural gas fracking near Long Beach and Manhattan Beach may be leaking toxins and/or methane that is disrupting the food chain near the sea floor. That is very near the largest sea lion rookeries in the region.

posted on Oct, 23 2013 @ 12:37 PM
link
Dont see why it would have to be "either" Fuku or quake - when it could be other long-term issues such as known drilling for oil along the west coast. In any case, other earlier post addressing all possibility not just 2:


Do not forget undersea volcanoes.

Thousand of new volcanoes revealed beneath the waves


The true extent to which the ocean bed is dotted with volcanoes has been revealed by researchers who have counted 201,055 underwater cones. This is over 10 times more than have been found before.

The team estimates that in total there could be about 3 million submarine volcanoes, 39,000 of which rise more than 1000 metres over the sea bed....

....there is a multitude of small volcanoes that have gone undetected. The only way of identifying them is to manually find their outline on sonar measurements taken from ships....

The earth has just come out of 50+ years of high solar activity and has been at solar 'minimum' for close to a decade. GRAPH: last three solar cycles and GRAPH: 400 years of sunspot activity


Yeah, the plastic island is mess, too. Things are getting bad enough that it's hard telling will be washing up. The Pacific is a huge mass of water, but those radiation maps that just keep getting worse don't look very promising. Sad part is I LOVE tuna...