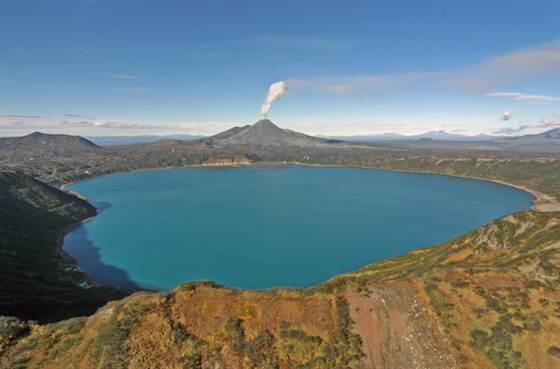 Karymsky Lake, with the peak of Karymsky volcano steaming in the background. ©Mikhail Zelensky

Grandma's death by acid is a highlight of the 1997 camp classic "Dante's Peak." The disaster epic chronicles the race to save a small town from a deadly volcanic eruption.

In the movie, volcanic gases quickly turn a placid lake into an acidic death trap as a family escapes burning-hot lava by boat, aided by a volcanologist played by Pierce Brosnan. Grandma sacrifices herself and jumps into the lake to push their dissolving aluminum boat the last few feet to safety.

It seems however that there is some truth in the scenario

In 1996, volcanic blasts at Karymsky Lake in Russia's Kamchatka Peninsula created a toxic chemical soup in the formerly pristine lake, according to a study published Oct. 1 in Geophysical Research Letters. The eruption decimated the lake's ecosystem, killing off thousands of fish and trees.

So how did this happen?

But unlike "Dante's Peak," the acidity didn't kill the thousands of salmon living in Karymsky Lake, Taran said. Death did come from below, but life in the lake first cooked to death, then was torn apart by tsunamis.

Here's what happened: The lake water steamed and boiled as superheated gas and lava broke through vents beneath the surface. Tsunamis up to 32 feet (20 meters) high pounded the shore with each new outburst, tearing out trees. New hot springs appeared. A small volcanic crater formed near the outlet of Karymsky River on the northern lake rim. Eventually, everything was covered with a layer of mud.

Some of you may be aware that Karymsky is actually one of the 16 (or 17) volcanoes in the world that are considered to be always erupting. You can find some more info here. Google "volcanoes always erupting" for the others.

I just thought folks might be interested in the fact the the film was not quite as far fetched as some may have imagined.

posted on Oct, 23 2013 @ 08:33 AM
link
Hey Puterman
Its nice to imagine catching pre cooked salmon, but the predigested by acid part spoils that fantasy

glad we have volcano free salmon here in Onterible Canada


And James May (Topgear) also "did a Brosnan" in Iceland by driving over hot lava - not as well as Pierce though!

There is a wonderful vulcanology documentary on Maurice and Katia Krafft (modern day heroes in my mind) and part of it has them in (i think) New Zealand in a rubber dinghy in a crater lake. They are trying to get depth readings with what is essentially a plumb line but it keeps melting off when they lower it - so there is a bit more Dantes Peak confirmation too.

You do realise that you may have inadvertently started a new craze? "What movie disaster scenarios are somewhat plausible?"

I like it. There is a thread for you!

posted on Oct, 23 2013 @ 09:24 AM
link
Have to admit Dante's Peak is one of my fav 'disaster' movies.
There are quite a few eminent volcanolagists out there who give it a good credibility and factual rating......surprised you didn't know that Puters