posted on Oct, 22 2013 @ 02:20 PM
link
Now I hear this phrase banded about a lot, especially amongst those of a "certain" Political affiliation.

And this is normal thrown at the poor and unemployed.

But I never here these same people throw it the other way towards the rich?

If anything they seem to be rather defensive of the rich and powerful.

Why is that? Shouldn’t they be held accountable for their actions and have certain responsibility’s?

Or once you earn a certain amount are you free from responsibility and even the same laws us mortals live under?

We can take the obvious and look at the bankers and politicians and the financial crash and situation we (US, UK and most of the west) are dealing with now. They conducted illegal/Dishonest and corrupt practices that in most country if a regular business owner did they would be fined and fined heavily with most our assets striped and most likely thrown in prison. And not to mention all the tax evasion. Shouldn’t you be calling for their heads along with the unemployed and poor?

Also you can’t deny money=power right? Hundred million airs, Billion airs, and even some celebrities weld allot of power. Just look at your local Congress and Parliament or mayors and governor I’m sure a good majority are at least in the 10 million + club.

Look at Mayor of the USA Bloomberg, he is what the 14th richest man and he has the power to ban coke in the land the "free"!

Also it not just politicians big CEO and bankers who company deal in billions weld great power! A mistake or reckless move can cost thousands of jobs or cause a giant economic crash that can go as far as cost lives!

So surely those at the top should be held to that RESPONSIBLITY with reckless behaviour and neglect of RESPONSIBLITY resulting in huge life ruining penalties! If failure of the poor to live up to their responsibility should earn them a wrecked miserable life, surely the same should be said for the rich?

Also should 1 human or even a small group be even able to weld such huge amounts of power like the big players do now?

posted on Oct, 22 2013 @ 02:34 PM
link
People with the most RESPONSIBLITY are the very same ones who have been RESPONSIBLE for the worst economic boondoggles and financial crimes and manipulations in history.

Let a fox guard the henhouse, and you'll have chicken for dinner every time !!


Or once you earn a certain amount are you free from responsibility and even the same laws us mortals live under?

This is their truth.

xuenchen
People with the most RESPONSIBLITY are the very same ones who have been RESPONSIBLE for the worst economic boondoggles and financial crimes and manipulations in history.

Exactly yet people are more concerned with what the poor are doing!

Look at who is welding the power and money and focus on THEM first.

Maybe if they acted more repsonsible we wouldnt have finicial crashes, huge wage inequality and huge cost of living. Therefore hence enough jobs and ones that paying a living wage hense less people needing welfare except the disabled and really lazy (the first help them the other screw them.).
edit on 22-10-2013 by crazyewok because: (no reason given)


Personal responsibility is something that pertains to everybody, as well as accountability for ones own actions. The key word is personal, nobody can force that on someone, it has to be taken seriously by every individual. Rich or poor, everyone is ultimately responsible for their own actions.

woodsmom
The key word is personal, nobody can force that on someone, it has to be taken seriously by every individual. Rich or poor, everyone is ultimately responsible for their own actions.

In the Ideal world where everyone pefect. YES.

But this is the REAL world.

Very bad people are born or delvelop every hour. And while everyone is playing by the unenforced rules of responsibility, these people are breaking them and treading on people. Hense why they get to the top and crap on everyone below them!

You will always get some that will break the rule and abuse the system. Its a given!
At some point that responsiblity has to be "enforced", especialy if one is in a position not to suffer negative effcets otherwise or you will get these people exploit the system as why not? They wont suffer any blow back.
edit on 22-10-2013 by crazyewok because: (no reason given)


woodsmom
The key word is personal, nobody can force that on someone, it has to be taken seriously by every individual. Rich or poor, everyone is ultimately responsible for their own actions.

Very bad people are born or delvelop every hour. And while everyone is playing by the unenforced rules of responsibility, these people are breaking them and treading on people. Hense why they get to the top and crap on everyone below them!

This is the crux of the problem. I read a while back about a homeless guy was caught shoplifting food and because it was his third felony he was sentenced to life. The damage this guy can do to society in a lifetime is in the thousands of dollars.

crazyewok
... less people needing welfare except the disabled and really lazy (the first help them the other screw them.)

If it is any consolidation many of the lazy on welfare give a good portion of what they get for free right back to the government in lottery tickets purchases. (at least here in Florida)

I do not know how us peasants are expected to have keep perfect records of financial business and report every penny we make to the IRS at the end of the year, yet the big banks and the federal government can continue to fudge their numbers and get bailed out as a consequence.

These are interesting times we live in and I do think a monetary system revolution is necessary in the next 50 years or less because given the current system and the direction it is heading is simply not sustainable.


I never said all on welfare are lazy, not at the moment.

There really is a shortage of jobs, especialy ones that provide a LIVING wage. Minimum wage jobs and part time jobs are good only for those still in college or just comeing out. You cant support a family at least on minmum wage in the UK as you still need wefare to top your wages up.

Its just no good.

It should be a case were no one should have to be on unemployment for a few weeks at most (I remner it being like that back in late 1990's).


You are right we don't live in a perfect world. It still does not change the definition of personal responsibility. I know there are bad people born everyday. Those that are so horrible that they can't live without hurting people belong in prison. Rich and poor.

Nobody has a right to take advantage of others. People still do, but only the individual can be personally responsible for themselves.

I can't jump in my 3 year old son's head and make the decision to stop telling mama no. I just can't, as much as I would really love to. He makes that choice to throw himself down on the ground and kick and scream. Now, there are consequences for all of our actions, and we as a society (or me as mama) get to choose the consequences of the bad actions people have. There is a difference.

And to answer your last question, no, one person or small group of people should not have so much say over the entirety. The system is just broken, and all of the law breakers should be dropped on some island somewhere to fend for themselves.
edit on 22-10-2013 by woodsmom because: To answer last question in op


I thinks that my point.

At the moment there are no negative consquences for the super rich with whatever they do.

For example If they F up the econmey they still have there 20 sports cars, 10 masions and a 200ft yactht and its us that pay for there actions.

If the super rich and powerfull screw up they should suffer consquences.


Yes, they should.
I wish we could toss out all of our elected officials in this country. Also, anyone who holds unelected power over the people. 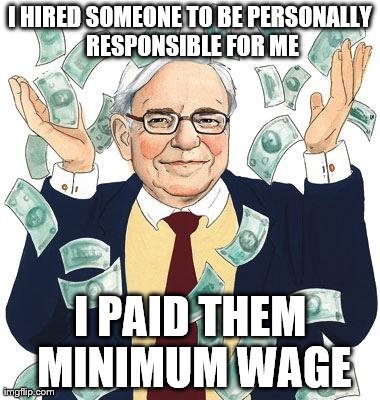 See that picture sums up the whole problem , hell why did I even bother typeing out the OP