White House Jay Carney press secretary kinda hinted it would be because of the fact that some States are not expanding MediCaid.

He mentioned it was all connected to the "Access To" ploy.

But this could be the usual double-talk.

On Monday, White House press secretary Jay Carney implied that the Obama administration could delay the implementation of the individual mandate thanks to the massive technological glitches attendant on the launch of the Obamacare exchanges.

Carney explained that anybody “without access to affordable care due to a state not expanding Medicaid or other factors” wouldn’t be penalized, and then avoided answering whether the website failures could be an excuse for non-compliance with Obamacare. “We are focusing on implementing the law,” Carney said, “and ensuring that people have the information they need.” He added, “The law is clear that if you do not have access to affordable health insurance, then you will not be asked to pay a penalty because you haven’t purchased affordable health insurance.”

White House communications director Jen Palmieri said she did not believe that would become an issue, explaining, “If we don’t have it fixed in time is a hypothetical that we don’t expect to encounter.” By law, coverage must be obtained by March 31 of next year or pay what the Supreme Court declared a tax.


Hmmm. More confusion instilled.
It's like picking petals off flowers.....
She Loves Me, She Loves Me Not

If independents are getting hit with fines it will push them to vote republican. The democrats know this but they are only delaying the inevitable.

But still ain't gonna sign up for it. I have my own insurance. Not the best mind you, but it's better than the ACA.


What I find ironically funny is that he is delaying the sign-up because of tech issues, but yet ignored everybody else who didn't want the damn thing in the first place. There has got to be a lesson in there somewhere.

Obamacare will be delayed because of a toilet malfuntion.

It it seems the crapper is not big enough and the sh!/ is getting deep, fast.

Spookybelle
If independents are getting hit with fines it will push them to vote republican.


I'm guessing there will be people from a broad spectrum of political beliefs that are not going to buy this disastrous government intrusion and they won't pay any fines either. This has the potential to get ugly. Real ugly.

posted on Oct, 21 2013 @ 09:37 PM
link
The part of Obama's speech that I heard earlier today was suggesting that people phone in, or fill out forms and mail them in.
I had also heard previously, someone say the medical application forms to send by snail mail, were 30 pages long. I hope that was an exaggeration - Canada's forms are only 1 page....

I really hope all these issues get fixed for Americans.
It's starting to sound like living in the US, is turning into an absolute nightmare.....

His *reasons* and His only.

He will not negotiate !!!

HE alone will save these poor people !!! 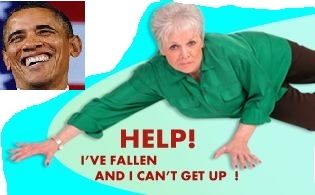 Not until I am older. There is no reason why a young person needs to worry about the things older people do. I do have my health while it lasts.

Obama and Obamacare can kiss my ass. I am pennyless anyways...sooooo

FINE ME BEOTCH.....I am not getting any forced FOR PROFIT product your buddies in the health insurance business push on me. They dont deserve a bail out. Screw them and Obama.

As usual, Obama will never admit to the real problems - just make excuses and blame other things! Business as usual - I do think they are starting to see the potential for this becoming a very big problem, however. We'll be seeing some very creative CYA over the next few months.

posted on Oct, 21 2013 @ 10:00 PM
link
Well, if he wants to blame (or give credit, depending on perspective) the states who outlawed his foolishness and took the Supreme Court up on it's offer to not expand Medicare/Medicaid, then states like mine will surely take it. We passed it by 61% here and these days? That's a regular landslide in mixed voting.

I think there's at least another half dozen that did it to the same level Missouri did. Obama has said he'd ignore our state law, make our exchange for us and just make it happen.

Looks like it's not happening that way. I kinda figured there'd be a huge wrench from the states sooner than later. His whole thing has to work together, or not at all. The ACA structure isn't piece meal that way, as I understand it and am coming to know it better.


So, Valerie decided that Obama thinks it would be best to delay things.


Can I just say that this made me literally LOL? Sadly in this whole debacle one can either do that or cry... It's a shame.

I feel like we are in for a game changer. Either we change the game or they do. The decision will make or break the American people IMO.

posted on Oct, 22 2013 @ 09:36 AM
link
I see everybody talking about this being about the 2016 election cycle ,but it's actually about the 2014 midterm election , the republicans already have control of the house, and will probably gain more seats there, then all they need to do is gain 2 seats in the senate for the republicans to gain control of the senate. Upon gaining control of the senate republicans will have enough votes to impeach Obama, period , and remove him from office without a single democrat vote. We all know he is guilty of impeachable offenses, but without the control of both house and senate it will never happen, this is the plan. I started in another thread that it should be remembered that the republicans were playing with the idea of government health care back when bush was in office , but they hired analysts to crunch the numbers and what they found was that it wouldn't work from a fiscal view, and that the citizens don't want it, but they knew that dumbocrats would pick this torch so to speak, and run with it, without hiring analysts to tell them that this will be political suicide for the democratic party, Which the democrats did exactly that. Now with Obama coming up on his sixth year in office and all his bullcrap coming to light, proof that obamacare is a rip off all of his stupidity with him shutting down war memorials and amber alert systems and national parks, " make it hurt regular Americans as much as possible. " Obama and the rest of the dumbocrats blaming the republicans for the government shutdown,the debt ceiling, which is making the republicans look like hero's for standing up against Obama and his Nazi regime. Now when the midterm elections hit they gain control of the senate, impeach Obama, and his entire regime. From here on out all the republicans have to do in every election is say the names Obama and Clinton , then say remember what they did to your country and Walla, nobody will ever trust any democrat ever again. We all know what happens when you let an incompetent idiot in the white house. Do you really want to trust these people ever again. I could go on and on about this, I see so many things that I could keep laying out for everybody, but I'll let you chew on that much for a while.

xuenchen
There probably will be a delay.

Well, you called it!

It is not working, none of it, but hey! Obama is frustrated, now YOU must pay!
Muwhahahah.

Hey you must still sign up by calling in or sending mail!
Even Rubio is going on a stall campaign....this is just so Cloward Piven!
Or is it Rules for Radicals?

Maybe both? The perfect blend of the new progressive strategy,
how to bring down a great nation!
Boo....hisss.

Wait, it failed, so we must postpone it. Hahha...
Nancy said we must pass it to know what is in it!?