Suspicious Note Found on Flight From Buffalo to Charlotte

CHARLOTTE, NC--- A flight from Buffalo, NY to Charlotte, NC is being detained at the Charlotte airport after a suspicious note was found on the plane. PHOTO GALLERY: Suspicious Note Found on Flight from Buffalo to Charlotte (on.wgrz.com...) According to WCNC, the NBC affiliate in Charlotte, officials from Charlotte Douglas International Airport say US Airways flight #2045 from Buffalo, New York, is being detained on the airfield after the discovery of a suspicious note on board the aircraft. US Airways tells 2 On Your Side that the flight landed safely at 1:40pm. Crew reported a security concern and the flight was taxied to a secure area.


Looks like it might be nothing but it seems like an awful lot of these important sounding stories lately out of my local news station, then poof they just disappear or no further reporting on them?. So for what it's worth if anything develops with this we shall see, not much other to add as there are not many other details released yet that I can find....

Whats next, a hurtful remark?

Careful some one might note you to death, maybe hold the note over the pilot's eyes so the plane crashes... Very dangerous people.

SO please form one line and prepare for the freedom prostate examine.


Most of the time these notes are bomb threats. The crew knows a real security threat from just a nasty note. This has been happening for years, with little media coverage, until 9/11.

The dumbest one I ever heard was someone who was going to miss their flight, because they were late to the airport, so a family member called in a bomb threat against their plane.


I love the Virgin brand, I really do which is why I continue to use it despite a series of unfortunate incidents over the last few years. This latest incident takes the biscuit.

Ironically, by the end of the flight I would have gladly paid over a thousand dollars for a single biscuit following the culinary journey of hell I was subjected to at thehands of your corporation.

Look at this Richard. Just look at it 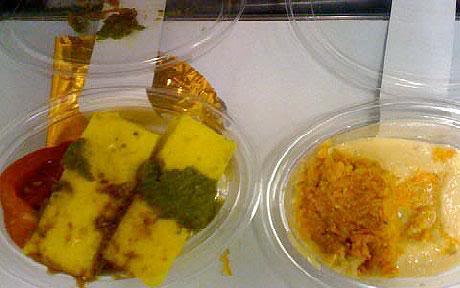 You don’t get to a position like yours Richard with anything less than a generous sprinkling of observational power so I KNOW you will have spotted the tomato next to the two yellow shafts of sponge on the left. Yes, it’s next to the sponge shaft without the green paste. That’s got to be the clue hasn’t it. No sane person would serve a desert with a tomato would they. Well answer me this Richard, what sort of animal would serve a desert with peas in: 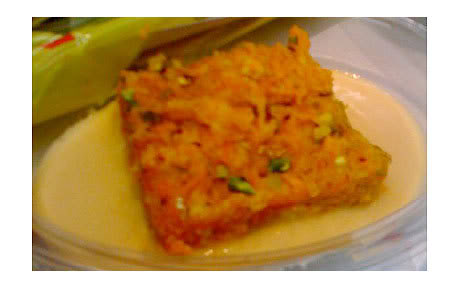 I know it looks like a baaji but it’s in custard Richard, custard. It must be the pudding. Well you’ll be fascinated to hear that it wasn’t custard. It was a sour gel with a clear oil on top. It’s only redeeming feature was that it managed to be so alien to my palette that it took away the taste of the curry emanating from our miscellaneous central cuboid of beige matter. Perhaps the meal on the left might be the desert after all.

Anyway, this is all irrelevant at the moment. I was raised strictly but neatly by my parents and if they knew I had started desert before the main course, a sponge shaft would be the least of my worries. So lets peel back the tin-foil on the main dish and see what’s on offer.

I’ll try and explain how this felt. Imagine being a twelve year old boy Richard. Now imagine it’s Christmas morning and you’re sat their with your final present to open. It’s a big one, and you know what it is. It’s that Goodmans stereo you picked out the catalogue and wrote to Santa about. 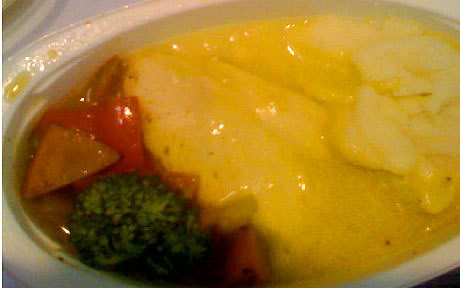 Now I know what you’re thinking. You’re thinking it’s more of that Baaji custard. I admit I thought the same too, but no. It’s mustard Richard. MUSTARD. More mustard than any man could consume in a month. On the left we have a piece of broccoli and some peppers in a brown glue-like oil and on the right the chef had prepared some mashed potato. The potato masher had obviously broken and so it was decided the next best thing would be to pass the potatoes through the digestive tract of a bird.

By now I was actually starting to feel a little hypoglycaemic. I needed a sugar hit. Luckily there was a small cookie provided. It had caught my eye earlier due to it’s baffling presentation: 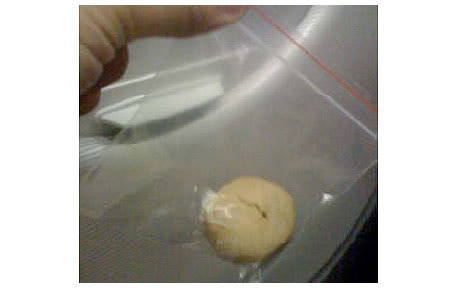 It appears to be in an evidence bag from the scene of a crime. A CRIME AGAINST BLOODY COOKING. Either that or some sort of back-street underground cookie, purchased off a gun-toting maniac high on his own supply of yeast. You certainly wouldn’t want to be caught carrying one of these through customs. Imagine biting into a piece of brass Richard. That would be softer on the teeth than the specimen above.

I was exhausted. All I wanted to do was relax but obviously I had to sit with that mess in front of me for half an hour. I swear the sponge shafts moved at one point.

Once cleared, I decided to relax with a bit of your world-famous onboard entertainment. I switched it on: 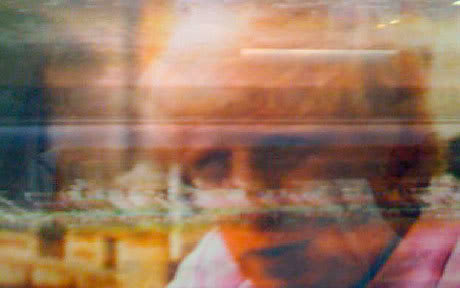 I apologise for the quality of the photo, it’s just it was incredibly hard to capture Boris Johnson’s face through the flickering white lines running up and down the screen. Perhaps it would be better on another channel: 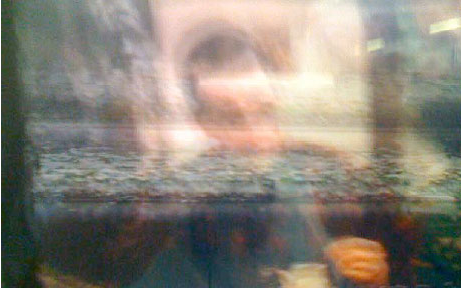 Is that Ray Liotta? A question I found myself asking over and over again throughout the gruelling half-hour I attempted to watch the film like this. After that I switched off. I’d had enough. I was the hungriest I’d been in my adult life and I had a splitting headache from squinting at a crackling screen.

My only option was to simply stare at the seat in front and wait for either food, or sleep. Neither came for an incredibly long time. But when it did it surpassed my wildest expectations.

So that was that Richard. I didn’t eat a bloody thing. My only question is: How can you live like this? I can’t imagine what dinner round your house is like, it must be like something out of a nature documentary.

As I said at the start I love your brand, I really do. It’s just a shame such a simple thing could bring it crashing to it’s knees and begging for sustenance.


They never release the note. They may say some of what it said, but they almost never release pictures of it, or the full context of it.


Ummmm....someone has too much time on their hands and just one too many issues to deal with. No offense, but i hope that post gets deleted and soon.


I know, i was hoping for a tweet of it or something i guess, thought maybe a passenger found it and posted it online. Anyway, my point stands. If you didn't want to explain what was really taking place then a "threatening note" would be a good short term cover.


That was so disturbing but so damn funny at the same time, thank you for the much needed humor today even though it is a scary thing to behold, it was the narrating behind the story that had me in stitches. 3 thumbs up for sure.


Except they never explain what's happening if they don't have to. Obviously if they lose an engine, they're going to tell you they lost an engine, but anything else it's a vague "mechanical failure". Sometimes, if you haven't left yet, they even blame mechanical problems on weather delays. Because if you don't go, and it's a weather delay they're not required to compensate you.


Liven up...You just may enjoy it

Or maybe "Next time you put a 500 pound guy who's so big he has to flip up the center armrest because he protrudes about six inches past it next to someone, you might try pairing him up with a 14 year old girl or the like, instead of me. Or I'm going to snap and strangle your flight attendants about three hours into having to sit on the edge of the seat with the ridge up the crack of my butt and one foot in the aisle. Seriously? Look down the plane. Who are the two biggest guys? Me, and Dumbo here. And in the entire plane, you stuck us next to each other. At least I fit in the seat outlines, if barely. But I don't have six inches of spare space to give. And I'm tired of having to stand up and hunch over the guy in front every time you roll that damned cart by. You've already made the seats so small they're more for French tri-athletic midgets. One more contortion and Humpty is out the wing door"


Ummmm....someone has too much time on their hands and just one too many issues to deal with. No offense, but i hope that post gets deleted and soon.


Everyone loves a bit of mustard.


I also wondered what the note said....the other day I read some big guy had to buy 2 plane seats to accomadate his size...they were in different rows!!!!!!!! I don't blame him for being mad


ROFL thanks for the laugh. I needed that.

posted on Oct, 22 2013 @ 07:35 AM
link
The note could have been anything. I remember when I was in flight attendant training, we were told to be on the lookout for ANYTHING suspicious. We were told about a flight that required an emergency landing because the word "BOMB" had been smeared into steam on the mirror in the lav and was discovered in flight. Turned out it had been the work of one of the flight attendants who just didn't want to be working that day. She was arrested and fired. But, goes to show that a "note" can be anything.